Referred to locally as White Pointers. That intense reaction is because when a Great White does attack a swimmer, surfer, spear-fisher or a diver the result can be horrendous. Often ending in a gruesome death for the victim. So the fear side of the equation is very easy to understand!

However, the loathing part is much more nuanced. And largely results from the way the Australian tabloid media treat these attacks.

So, an actual attack is guaranteed to make the front page and lead the nightly “news” on television.

Why? Because a shark attack provides an instant boost in circulation. While a horrific one, where a death is involved, produces a huge spike in ratings.

A good example of this is the report by the Australian tabloid the Daily Telegraph on the tragic loss of Japanese surfer Tadashi Nakahara at Shelly Beach in Ballina.

Nakahara’s death received the full treatment. Complete with references to “MONSTER” sharks and the need for shark nets!

It’s no secret that Peter Benchley’s 1974 seminal novel Jaws, together with the subsequent Steven Spielberg movie, were largely responsible for establishing the bad reputation.

But the sensationalist treatment of shark attacks by the news media has reinforced it.

And the many television “documentaries” made about them (which usually aim to scare rather than educate the viewer), has firmly entrenched the overall perception.

Overall, it is nothing more than cheap-shots “journalism” with no attempt to understand the situation.

The Australian Great White – The Facts

The reality however is significantly different… And the Australian Shark Attack File data compiled by Sydney’s Taronga Zoo provides a much clearer picture.

2015 was a “bad year” with 22 confirmed cases of unprovoked shark attacks in Australia. Compared to 11 such encounters in 2014 and significantly above the decadal average of 13.

Of those 22 attacks in 2015, 1 was fatal and 14 resulted in injuries. And of those 14, 10 were classified as “severe”, meaning the victim was bitten. To put those numbers in perspective on average 8 rock fishermen drown and 23 scuba-divers die each year in Australia.

So, given the approximately 100m “visitations” that Surf Life Saving Australia estimate take place in our waters each year by swimmers, surfers and divers. The reality is that the risk of being a victim of a shark attack is well over 50m to 1…

Even then, the chances of actually being attacked by an Australian  Great White are remote. Because the data from Taronga Zoo indicates that most attacks are from Bull Sharks. But data like that does not sell newspapers or make the evening news!

The Australian Great White – The Science…

Australia is a generally progressive and forward looking first-world country. We do however tend to resent anything that looks, or even smells like, over-regulation… But putting people in the water with dangerous creatures like the great white is not really something that can be left to happenstance!

First of all there is the obvious risk to the humans involved. Less obvious though is the impact on the sharks and the immediate environment where the interactions are taking place. For example, will “feeding” the sharks change their normal behaviour? And, will that behavioural change negatively impact other creatures in the general area?

The responsibility for regulating the shark cage diving operators (SCDO’s) falls to the South Australian state government. Specifically the Department of Environment, Water and Natural Resources and it’s an onerous task… There are currently three operators, who between them employ around 70 people and bring in over $11m in the state. Plus, it has to be said, a strong element of excitement in to South Australia – a state often considered as a bit on the dull side. 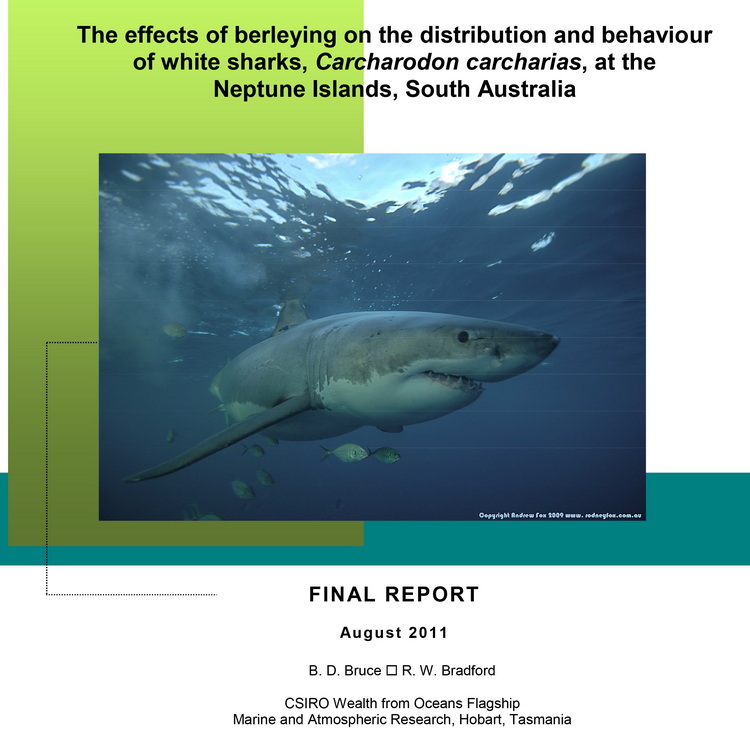 Thankfully, our first-world status means that we do have some significant expertise to draw upon.

Marine scientists like Barry Bruce of the CSIRO and Charlie Huveneers of Flinders University have conducted numerous studies, with the strong support of the three SCDO’s, to better understand the impact of cage diving.

Probably the two most relevant ones are the Effects of Berleying at the Neptune Islands by Barry Bruce and Russell Bradford. Together with Interacting with Wildlife Tourism by a team led by Charlie Huveneers.

You can access both papers with the links provided. They are both very well done (in my opinion…) but be warned, they are quite “dry reading”. The CSIRO study by Bruce and Bradford became the basis for the Licensing Policy described below. While the Huveneer paper provides valuable additional insight in the behaviour of great whites at the Neptune Islands 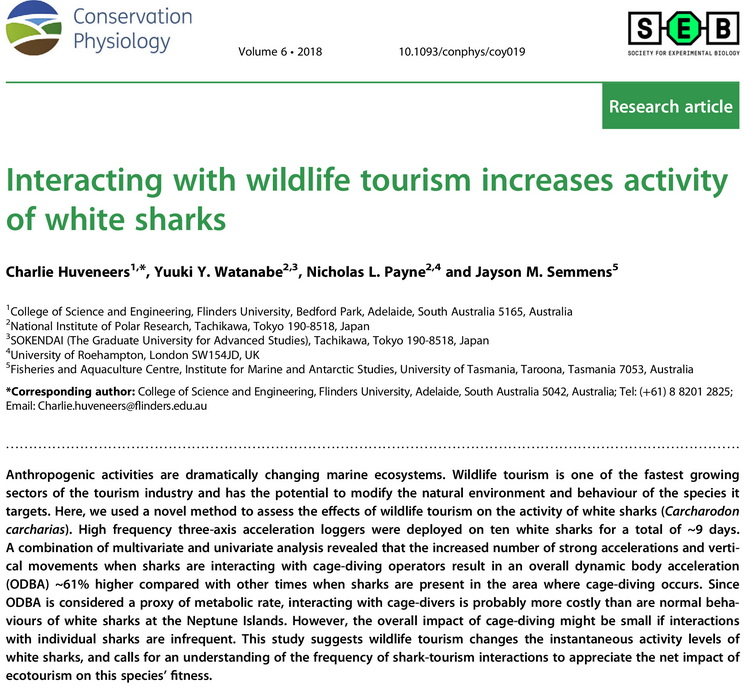 South Australia’s Department of Environment, Water and Natural Resources has to perform somewhat of a balancing act with great white shark cage diving. The Neptune Islands are one of just four places in the world where in-water encounters with these animals are possible. The others are Gansbaai in South Africa, Guadalupe Island in Mexico and the South Island of New Zealand.

Cage diving brings in important and significant tourism revenue to Port Lincoln. Plus it provides jobs and a degree of “razzmatazz” the state badly needs. 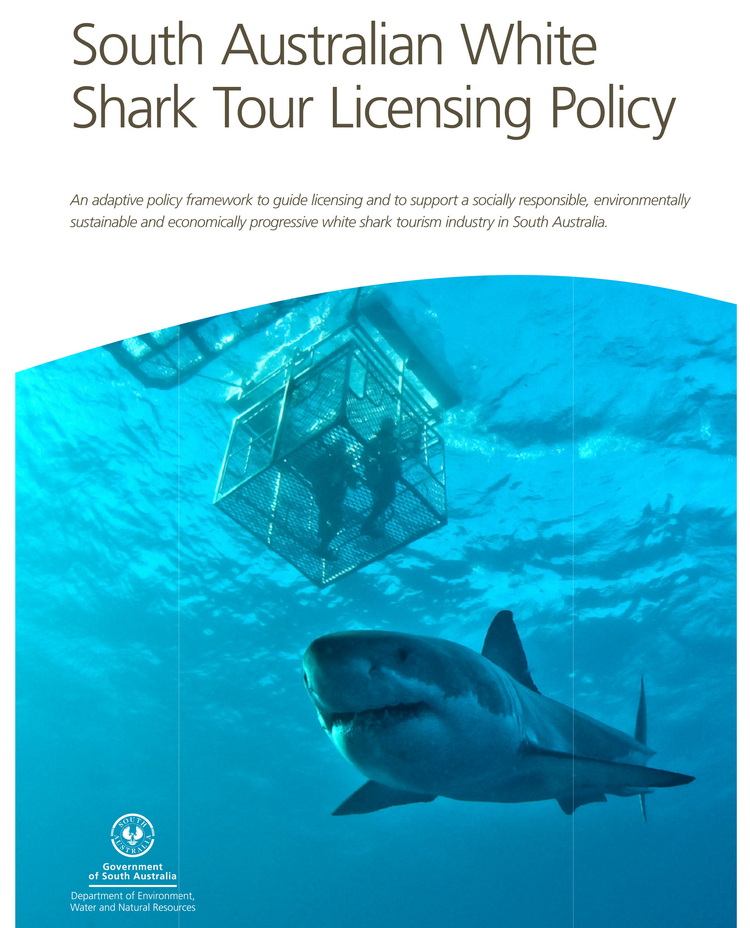 But the tabloid media has made the great white sharks feared and loathed, plus there are valid concerns about altering the great white’s natural behaviour.

In that it has accepted the three key recommendations that came out of the CSIRO report:

And, it appears to have worked closely with the SCDO’s to achieve that balance. All of which has come together in their South Australian White Shark Tour Licensing Policy.

As someone once said to me – the basic role of sharks in our oceans is to take care of the dumb, the dead and the dying… There are literally hundreds of shark species, but their basic role is the same. And the Australian great white shark sits at the very top of those species

It is a superbly evolved apex predator. But, it has been responsible for numerous attacks on swimmers, surfers and divers. However, as the facts above illustrate, statistically, the chances of being attacked by a shark are incredibly low.

Perhaps a better perspective is that each year in New York City, people bite other people 10 times more than sharks bite people worldwide…

Those extremely long odds become even longer if you factor in that the majority of those attacks were cases of mistaken identity. Great whites simply do not eat humans – we are just not nutritious enough for them to bother.