The north coast of Bali is about as far as you can travel, both geographically & culturally, from the tourist triangle of the southeast corner of this famed Island of the Gods.

Gone are the luxurious resort complexes and fancy restaurants of Seminyak & Nusa Dua, as is the new age spirituality of Ubud and the hills to the north of Denpasar.

Up on the north coast is where the Balinese live as they have done for hundreds of years – in their tight knit village communities and earning their living from the land.

There are pockets of tourism on the north coast and a lot of it is focused around scuba diving, such as the small town of Tulamben & it’s famous Liberty wreck and nearby Seraya with it’s great muck diving.

Going further west along the north coast is the town of Lovina, which aspires to be a key tourist location but never seemed to quite make the grade.

As you pass through Lovina and head towards Gilimanuk and nearby Menjangan Island, after about 10km you will enter a small town called Seririt.

There is nothing much to distinguish Seririt from the many other similar towns & villages in Bali, unless of course you are a diver and know that very near there is one of the best muck diving sites east of Lembeh!

The site is called Puri Jati, but most people refer to it as PJ, and you need to look for the Zen Resort sign on the right hand side of the road.

Turning here and following the road up the hill past the resort and down into the valley below you will see a classic Balinese scene of vivid green rice paddies which stretch right up to the edge of a black volcanic sand beach. 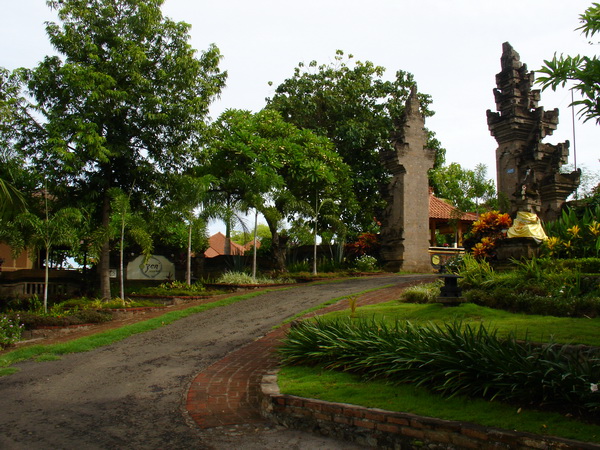 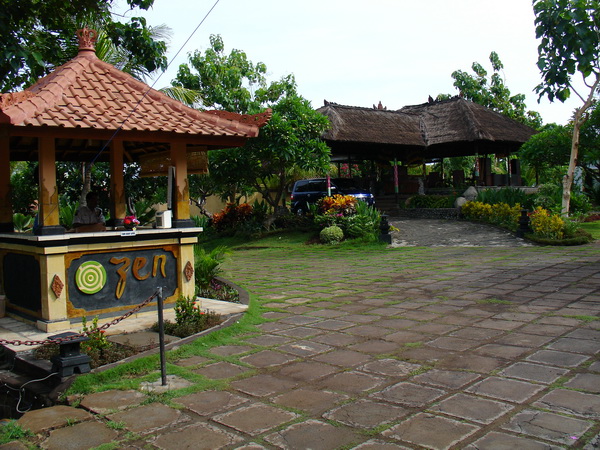 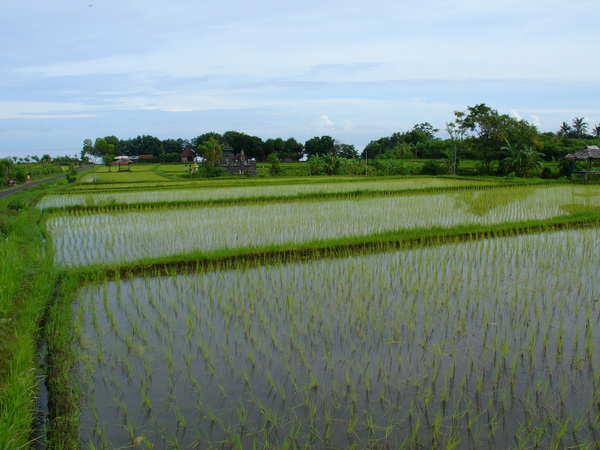 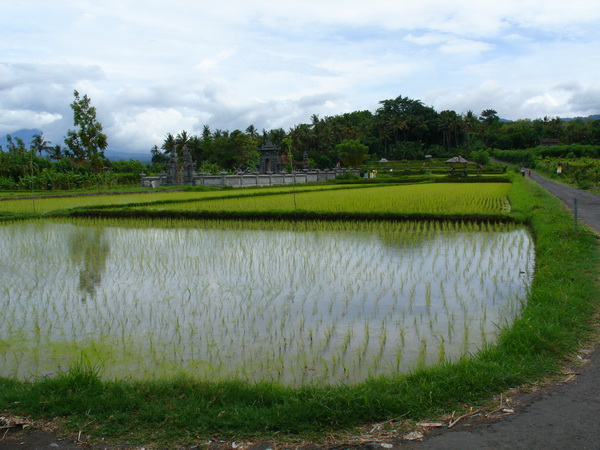 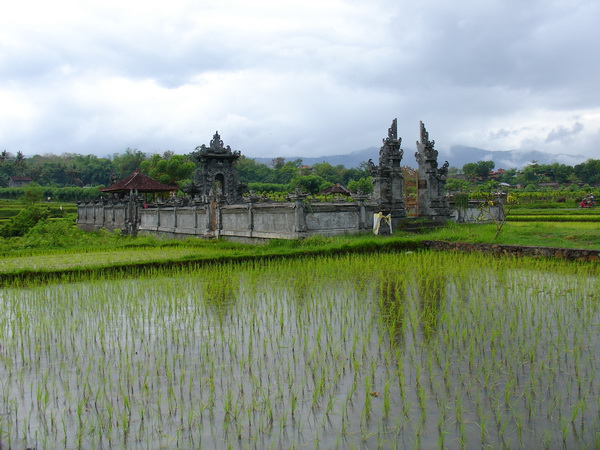 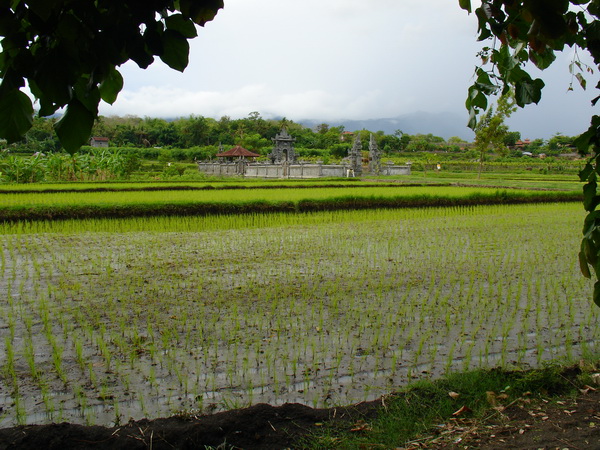 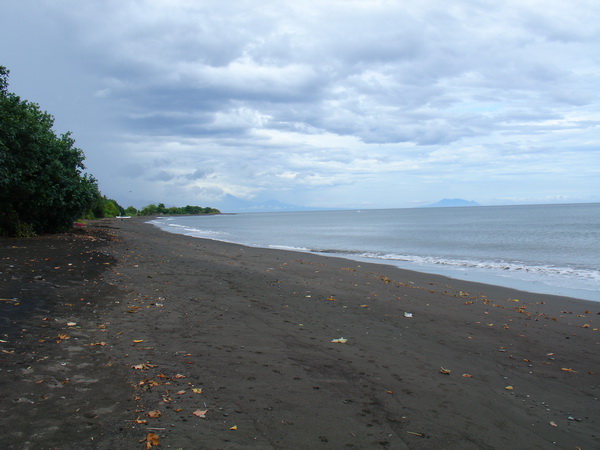 First discovered by the highly respected Bali based Japanese underwater photographer Takamasa Tonozuka, stories of what you can see at Puri Jati filter through the diving community on a regular basis.

Puri Jati is very easy to dive and site entry is as simple as walking down the beach into the water, putting on your fins and then swimming straight out.

For about 200m from the beach the underwater seascape is a gently sloping dark volcanic sand incline, then when the depth reaches about 12m there are some dune like ripples in the sand and the gentle slope becomes a fairly steep drop-off that descends into the depths of the Bali Sea.

Initially the visibility is less that 1m due to the wave action on the shallow beach, but it improves rapidly once you head out to the drop-off where it’s typically about 15m. The average visibility on the gentle slope, where all the critters are, is about 10m.

However, until your eyes attune to the environment it’s very easy to keep swimming until you reach the drop-off, wondering where are all the critters you have heard so much about.

The answer is really quite simple – they are below you in the sand, but you will probably need a good guide the first few times you dive PJ as they are not easy to see at first!

Diving Indonesia: Bali – Puri Jati and the Faces In The Sand…

The sloping sand is host to an amazing array of creatures, who seem to be able to either blend in completely with the soft dark sand, or appear & disappear into it at will.

So well adapted to their environment are some of these critters that it’s quite easy to find yourself looking directly at them without realizing they are actually there.

Such as about 15 minutes into my first dive at Puri Jati, when my dive guide Angky spotted the first face in the sand. All I could see was dark sand till an eye movement made me realize that I was looking at the distinctive eye stalks and face of a partially buried mimic octopus.

Once I knew what I was looking at I was able to zoom in with my camera and really take a close look.

Then, when Angky gently inserted his critter stick into the sand to the side of, but well away from the mimic, it responded by slowly emerging from it’s hiding place and providing us with a magnificent selection of its many guises!

From then on there was no looking back and between Angky & I as we spotted blue-ringed octopus, a selection of frogfish, robust & ornate ghost pipefish, snake eels, crocodile fish and Ambon scorpion fish to name but a few – the place is a veritable critter wonderland! 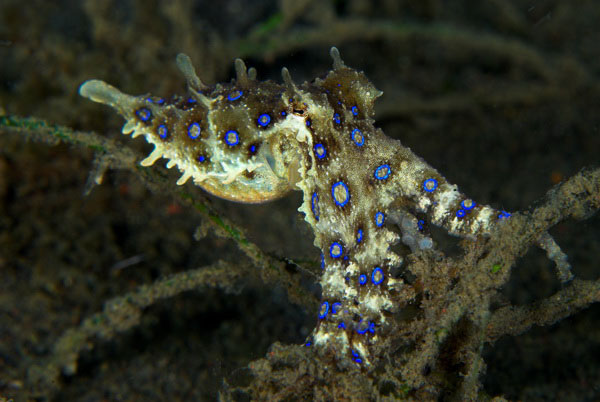 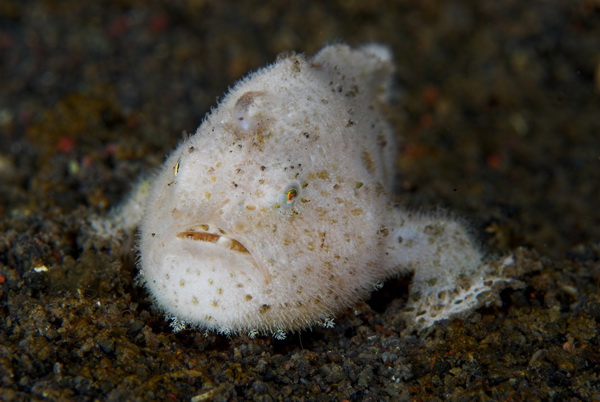 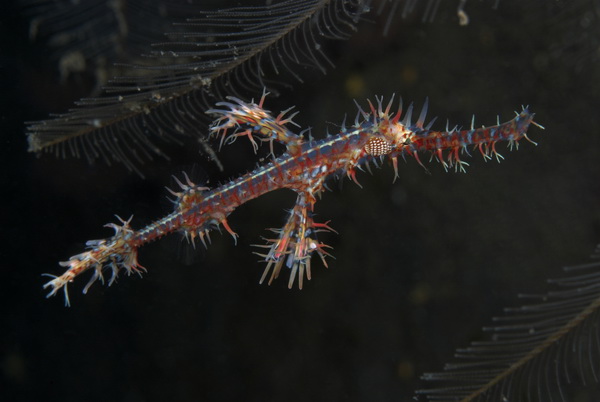 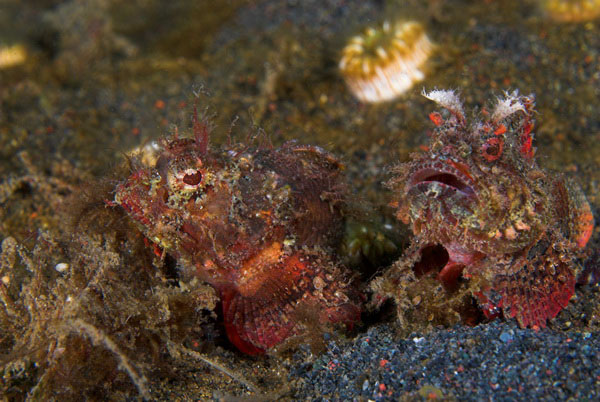 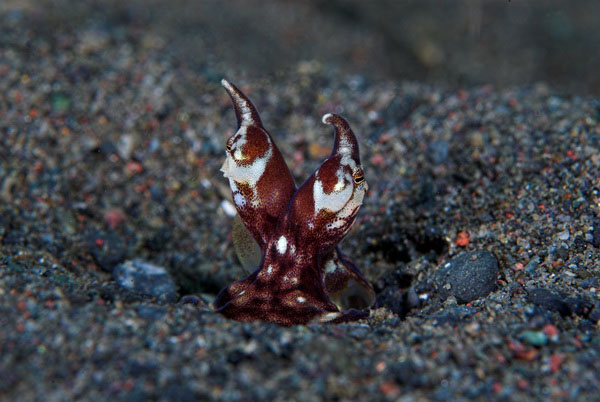 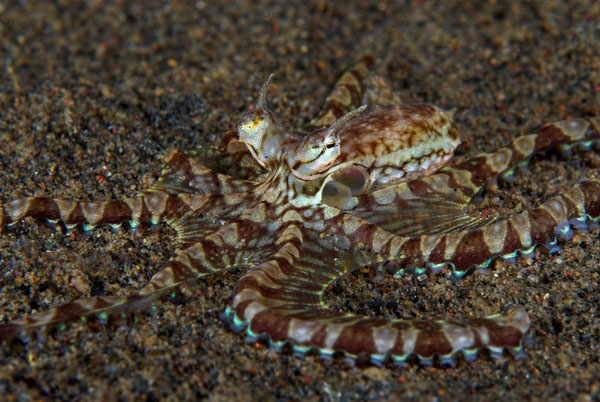 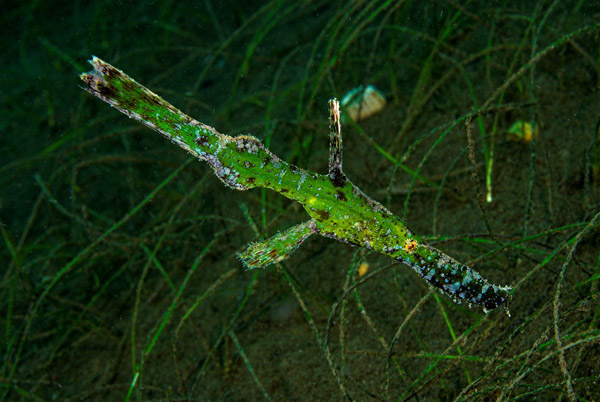 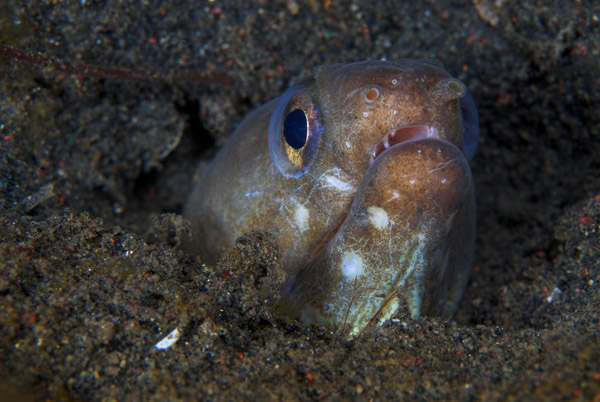 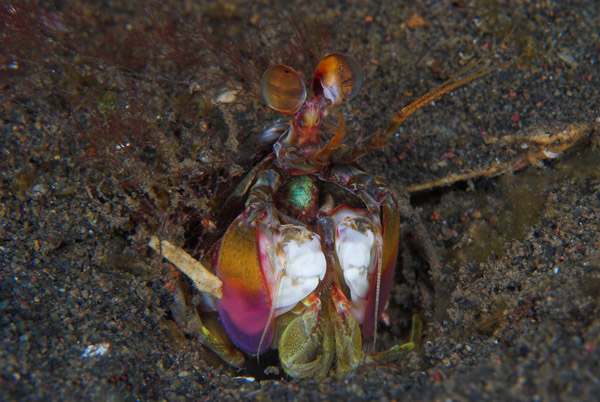 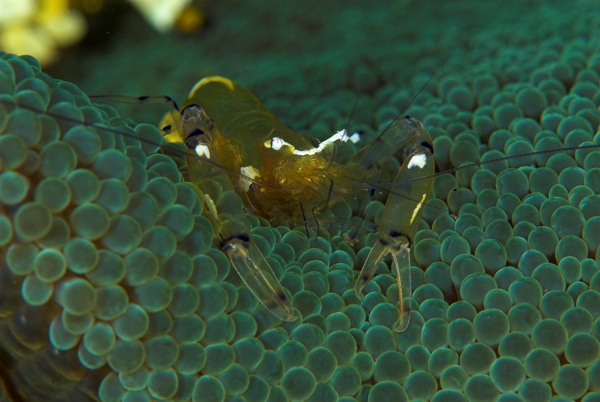 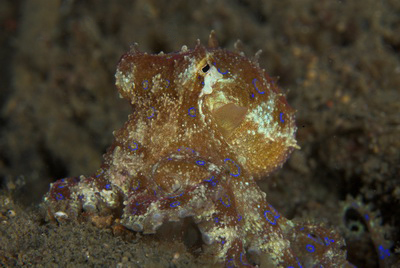 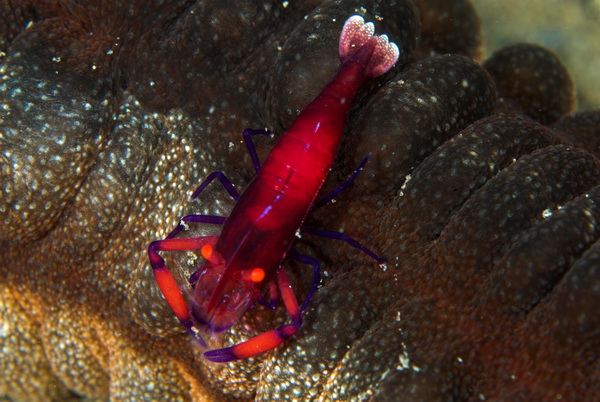 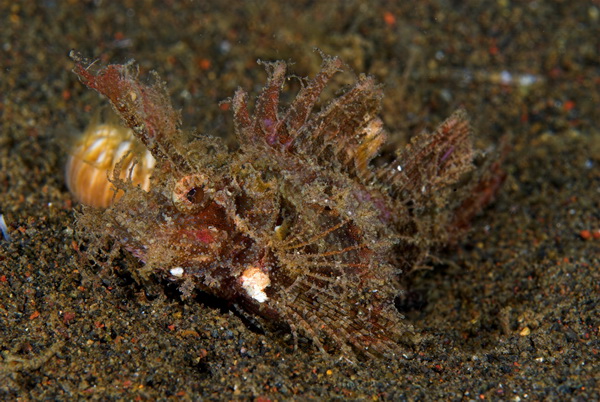 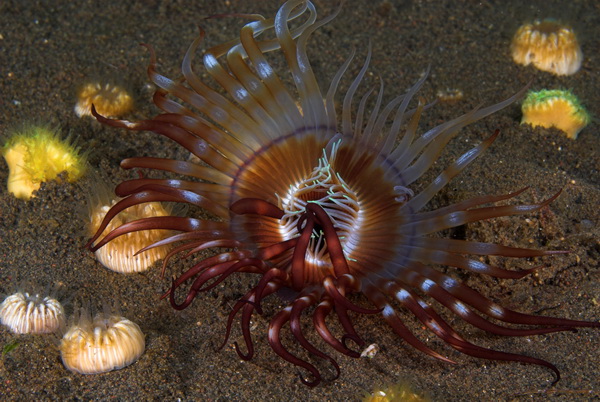 Initially diving at Puri Jati is a bit confusing as there seem to be no major features with which to orientate yourself, however once you have dived it several time you can start to discern where you are and navigate the site.

Being a shallow site of generally less than 10m, dive time can be quite long and it will usually be hunger (or bladder pressure…) that made you head back to the beach! It’s very easy to spend a couple of hours underwater and average dive time are often well in excess of 60 minutes.

Once you get used to Puri Jati you will notice changes in activity at different times of the day and in my experience the six hour period from about nine in the morning to around three in the afternoon seems to be the most active and provide the best chance of seeing the largest variety of critters.

Definitely a macro site and virtually all of my images were taken with the Nikon 70-180 macro zoom lens.

Diving Bali: Puri Jati – Why Are The Critters There?

There are three basic requirements for a critter “hot spot” to develop – first the area needs to be sheltered from bad weather and strong wave action. Secondly, there needs to be a source of fresh water run-off, rich with organic debris. Finally, and most importantly, the spot must be flushed regularly by deep-water upwellings that bring cold-water, rich with the detritus of the sea.

Puri Jati’s location in a sheltered bay provides it with protection from all but the strongest winds whilst the large stream flowing into the bay, just to the right of the new gearing up area, carries with it a rich flow of run-off from the rice paddy fields.

The Indonesian Throughflow satisfies the third criteria – this phenomenal flow of water from the Pacific Ocean, to the northwest of Indonesia, into the Indian Ocean to the south of the archipelago really is the key to understanding why the Indo-Pacific area is such a rich & diverse marine environment.

Back To: Scuba Diving in Bali