Diving Indonesia… There are many truly incredible diving locations in Indonesia and, in so many ways, the archipelago offers some of the best tropical diving in the world!

Few other countries can match its tremendous biodiversity. But… the Indonesian archipelago is made up of around 18,000 islands and covers a vast geographical area. It takes almost 8 hours to fly over it all from Banda Aceh on the western tip of Sumatra. To the remote and very isolated border with Papua New Guinea, in the east.

You could literally spend years exploring what it has to offer! And, in such a huge area, there are also a lot of places that are not so good. So, where to begin? Well… start with a map of the incredible Coral Triangle. The area of the world generally considered to be the epicenter of marine species diversity.

The marine biodiversity of the Coral Triangle is simply stunning and is characterised by more than 600 species of coral and 3000 species of reef fish. To put those numbers into perspective – the Red Sea has around 350 coral species and 1200 fish species. While the Caribbean has around 70 and 1700.

The entire eastern half of the Indonesian archipelago makes up the majority of the Coral Triangle’s western lobe. And incorporates the provinces of West Papua in the east and Kalimantan in the west. With Sulawesi, Halmahera and Maluku in the center and the general area known as the Lesser Sunda Islands to the south.

To understand why the eastern half of the archipelago is in the Coral Triangle and the western half is not… Requires a basic understanding of the Indonesian Throughflow.

Simply stated, the Throughflow is the largest movement of water on the planet. And is the key to understanding the amazing biodiversity of both the Coral Triangle and eastern Indonesia.

You can read more about the Throughflow on the link above, but in a word it’s complicated! The Readers Digest version is that the region’s trade winds and associated oceanic currents create a difference in sea-level between the Pacific Ocean, to the north-east of the archipelago, and the Indian Ocean to the south-west.

That differential produces the massive flow of water, rich with nutrients from the deep basins of the north-west. And carrying with it eggs and larvae of the Indo-Pacific region. Where those waters touch land they help to create and nourish that incredible biodiversity.

The effective western limit of the Throughflow is the Makassar Strait between the province of Kalimantan on the huge island of Borneo and Sulawesi to the east. As you go further west towards Sumatra, where the Throughflow does not work its magic, the quality of the diving reduces.

That basic understanding and awareness of both the Indonesian Throughflow and the Coral Triangle allows a much more considered approach as to where you should dive in Indonesia.

But the eastern half of Indonesia is still a really big area… So let’s boil it down into the main locations and what you can expect to see there. Plus, you need to factor in some of the challenges of getting there once you arrive in Indonesia.

There are four main areas for diving in Indonesia – Raja Ampat, Komodo, North Sulawesi and Bali. Each of locations has a lot of positives, some negatives and varying degrees of logistical challenges to be aware of.

I have been diving Indonesia for over 20 years and, prior to Covid-19, was based in Bali for 7 years. While I have dived all the main locations extensively, plus most of the lesser ones. I have not documented everything or kept what I had written about fully updated I’s afraid…

Some of what is available on Indonesia has been updated (like all the rest of the site has been). But it’s a huge task and (thanks to C-19) I am working my way through it all! Please check back as I will get there!

Physically located on the north-western tip of West Papua, in the far east of the Indonesian archipelago, and covering a total area of some 4600 km², Raja Ampat offers some of the very best diving in Indonesia. It is possibly the best tropical diving in the world – it is that good!

In Bahasa Indonesia, Raja Ampat means the the “four kings” – in reference to the large islands of Misool, Salawati, Batanta, and Waigeo. But there is a lot more to the area than those four kings as there are around 600 other islands!

Raja Ampat is widely considered to have the most biodiversity in all of the Coral Tringle. With some 574 coral species, 1500 species of fish and 15 mammal species it really is incredible diving.

The Indonesian Throughflow is what makes Raja Ampat so special. But it’s what also what makes the diving there so potentially challenging…

If you really want to experience the best of Raja Ampat, then you must be comfortable in diving in strong currents – simple as that! Where the currents are strongest is where the biodiversity is at its best. 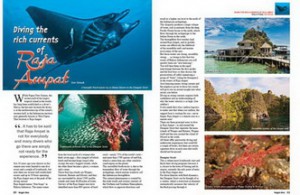 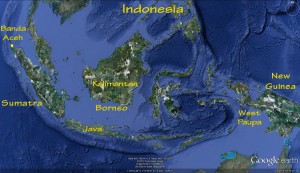