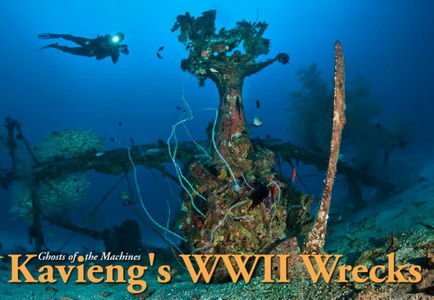 Kavieng’s WWII Wrecks… The small town of Kavieng was seized by the Japanese in January in 1942 when they invaded PNG. That invasion came just seven weeks after the surprise air attack on Pearl Harbour which brought America into WWII.

Although it played second fiddle to the huge Japanese naval base at Rabaul in New Britain. Kavieng was in fact a very strategic location for the invading Japanese forces during WWII.

The town’s location in New Ireland Province meant that it protected their rear. It was also an important part of their military supply chain. Fighting as they were to gain complete control of PNG and then prepare for the invasion of Australia.

So it was that the town became an important target for the Allied forces in 1943 and 1944. Preparing as they were to turn the tide of the war in the Pacific and eventually defeat the Japanese invaders in 1945…

The majority of Kavieng’s WWII wrecks that are diveable are in and around the harbor and are the remains of WWII aircraft – five Japanese and one Australian. While in neighboring New Hanover there are two large two large Japanese WWII shipwrecks, the Sanko Maru and the Kashi Maru, plus a very intact Type C midget submarine.

X-Ray magazine recently published an 8 page article of mine on diving Kavieng’s WWII Wrecks. You can download on the link provided.

You can also also use the following link to access the detailed location guide the Complete Guide to Diving New Ireland. Just follow the links at the bottom of each page to take you through all the pages. You will find much more about the diving and dive sites of this remote but very interesting part of Papua New Guinea.

Go To: The Complete Guide to Diving New Ireland

The Florida Manatee
Next Post: Atauro Island in Timor Leste