Albatross Passage at its Best

Albatross Passage is by far the best site on the Bismarck Sea side of Kavieng and is often described as the area’s “signature” dive site. While conditions and visibility at Albatross Passage do vary with the state of the tide. Hence if you catch it in the right conditions, it is hard to imagine a better coastal dive site – it is superb!

Albatross Passage itself is a large channel between the tip of New Ireland and Manne Island. One of several large islands that partially fill the 22km gap between New Ireland and New Hanover.

The passage is named after the German gunship Albatross. Which was successfully used to subdue the local population and establish colonial rule in New Ireland in the late 1800’s. 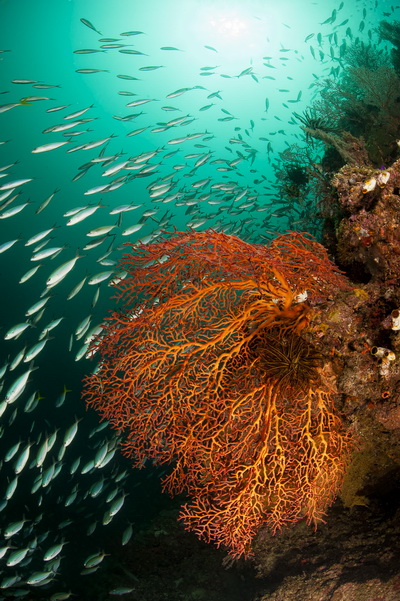 Where the channel ends at Cape Masala, on the south-western tip of New Ireland island, is the location of the actual dive site.

It is a big site and reminiscent of a large semi-circular amphitheater, that faces out in to the Bismarck Sea.

The sides of the “amphitheater” are terraced. With the upper terrace starting at about 10m, down to about 30m where there is a sandy plateau.

The wall of the upper terrace is rich in large gorgonian sea fans, black coral trees, soft and hard corals and sponges. All thriving on the rich currents. And in among all the marine growth are lots of small fish and critters – a macro photographers delight!

In the central area there is a large resident school of very photogenic yellow-tailed snappers. So, if you approach them slowly and carefully, they will often let you get close and take a group photo!

On almost every dive at Albatross Passage you will see numerous reef sharks cruising back and to out in the blue. And very often they will be joined by large dog-tooth tuna, schooling barracuda plus mobula and eagle rays.

You would literally need dozens of dives to fully explore and appreciate Albatross… It truly is a very special site!