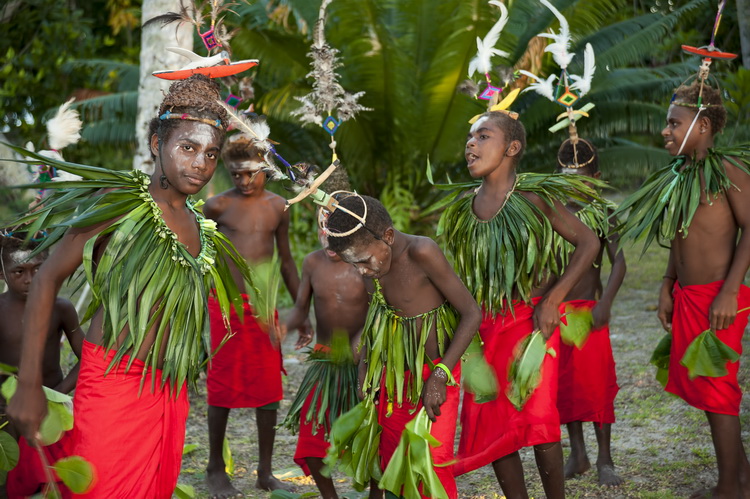 New Ireland Province lays at the far eastern end of the Bismarck Archipelago. The province is renowned internationally for its unique Malagan carvings and traditional culture.

The province consists of the large main island of New Ireland. And numerous other smaller islands, the largest of which is New Hanover.

The musket shaped New Ireland is 360km long, but only 10km wide at its narrowest and 40km wide at its broadest. Running down the spine of the island are a series of mountain ranges. The highest of which is the Hans Meyer Range with Mount Taron peaking at just below 2400m.

Located just 2° degrees south of the equator, New Ireland’s climate is tropical and average temperatures are between 28° and 32°C. The dry season in the northern and central areas of New Ireland is between May and October, when the south-east trade winds make their way up this way from the East Coast of Australia. While November to April is the north-west monsoon season.

The main town in New Ireland is Kavieng, the provincial capital.

The Colonization of New Ireland Province

The Dutch were the first recorded Europeans to arrive in New Ireland. That was in 1616 and they thought the island was an extension of nearby New Britain… It was not until 1767 that the British explorer Philip Carteret established that it was in fact a separate island. Carteret  named the island Nova Hibernia.

In the 1870s and 1880s, the French nobleman Marquis de Rays tried unsuccessfully to establish a French colony on the island.

de Rays called the colony  La Nouvelle France. Marketing it as an existing, well-established and successful colony. While it was all basically a scam, in the process a total of four ill-fated expeditions were sent to the island.

The third of these, referred to as the de Rays Expedition, resulted in the death of 123 settlers from disease and starvation. As a result the survivors were eventually rescued by Australia. Finally being allowed to settle in Sydney, albeit under further traumatic conditions!

Consequently the island was colonized by Germany in 1886 who renamed it Neu-Mecklenburg. The main legacy of that colonial period is the Boluminski Highway. Which runs for 270km down the east coast of New Ireland from Kavieng to Namatanai.

Named after Franz C Boluminski, the German District Officer from 1910 until WWI. Boluminski oversaw the construction of the highway by forcing individual villages along the coast to construct and maintain a section of it.

Finally Australia took control of the area in 1914, during the early stages of World War I. As a result it was renamed it New Ireland.

On the 21st of January 1942. Almost seven weeks after the surprise air attack on Pearl Harbour, which brought America into WWII.  Kavieng came under a massive aerial bombardment by the invading Japanese forces.

That night the majority of the Australians in the area were evacuated. And two days later the Japanese invaded and occupied the island. Just one day after they seized Rabaul in East New Britain.

Over the next two years virtually all of the Europeans who had remained on the island were killed by the Japanese.

Rabaul was the main Japanese base in the Bismarck archipelago. And from where they launched their New Guinea campaign. However Kavieng also played a supporting role. So by the time the Allies retook the island in 1945, Kavieng had been almost completely destroyed.