A more accurate description would probably be sorcery. And in in recent years there has been a a quite dramatic increase in sorcery-related violence in PNG. As detailed in this article by Australian journalist Jo Chandler in the now defunct Global Mail.

Religion in PNG is a multi-faceted thing. And to the casual visitor to the rural villages, where more than 80% of the country’s 7.8m people live, it would be easy to form the impression that the country is deeply religious.

Missionaries are common throughout the country. And their work is plain to see in virtually every village where the local church is the epicenter of the community.

However beneath that externally pious appearance is another story related to Puri Puri… And the intensely superstitious nature of Papua New Guinea.

I first became aware of this when I stayed in one of the local villages near Tufi. But my attempts to better understand Puri Puri were met with embarrassed silences. And it quickly became obvious that the locals were really not comfortable talking about it.

Eventually I learned that the people who actually practice and administer the more potent elements of Puri Puri live apart from the main settlements of Tufi, Koje and Sefoa in a small village called Tuvirade, further up in the foothills of Mount Trafalgar.

I asked Tufi Dive Resort if there was anyway they could arrange a visit to Tuvirade. So they sought the help of Ramsi Kumi, a member of the local Fiyogha clan who lives in Koje. He works with the resort to organize various events for tourists who want to experience village culture.

Ramsi is an articulate and clear thinker who sees tourism as the best way to help his clan to improve their lives.

He has worked with the village elders to arrange elaborate sing-sings and cultural shows where special local traditions, such as Oro Province face tattooing are demonstrated.

I had attended several of these shows. Finding them to be well organized and without any hint of the circus sideshow effect that could so easily happen.

But sing-sings and face tattooing are one thing, Puri Puri is at a completely different level.

It turned out that  to gain access to Tuvirade village I would first need to meet the Fiyogha, Tawairi and Kandoro clan elders and explain my intentions…

So Ramsi and I made the boat trip round to MacLaren Fiord. Then hiked up to Koje for what turned out to be one of the toughest interviews I have ever had as I sat with the elders for nearly five hours while we discussed matters far and wide!

I started off with an explanation of who I was. And then explained that I was interested in learning about their history, culture, tribal structure and in particular what Puri Puri was and what role it played in their lives.

In return they shared the story about how the three nomadic clans had first come to the Tufi area some six generations ago. In search of good land & hunting but had faced stiff resistance from the incumbent Korabi tribe. Fierce fighting was eventually followed by a peace locked in place by strategic marriages arranged between the clans and the Korafe tribe.

I tried asking various questions about Puri Puri and the practitioners who occupy Tuvirade village. But received polite and diplomatic “non-answers”. None the less it was a great afternoon and one that I will always remember, but the nearest I got to Puri Puri was a promise to seriously consider a visit to Tuvirade if I came back to Tufi later in the year… 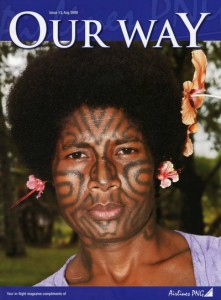 It was another 8 months before I got back to Tufi and waiting for me at the airstrip was Ramsi.

In the interim, and unbeknown to me, I had become a minor celebrity in the area when my article on homestays had been published in the Airlines PNG in-flight magazine Our Way.

Ramsi wanted to capitalize on this success and use it to convince the village elders to grant me access to Tuvirade. So he was keen to see if I had kept my promise to bring certain gifts for the elders – which I had.

It still took another two weeks before the final OK was given and Ramsi was able to escort me through Koje and on to Tuvirade.

The Puri Puri Men of Papua New Guinea – The Visit

I was really quite unsure what to expect. But was definitely not anticipating being greeted by an elder like Johnson Egha… Who spoke excellent English and had traveled overseas to both the USA and Australia during the 18 years he had worked at the Panguna mine in Bougainville.

I introduced myself and gave my standard introduction, sensing that it was probably redundant given all the discussions that had taken place prior to permission being granted for my visit.

Nonetheless I felt it important to set the right tone prior to launching into all my questions.

Over the next two hours Johnson patiently answered those questions and educated me about the origin of Puri Puri and it’s role in maintaining the balance of village life.

He explained that Puri Puri had evolved as a way of keeping order in the village in the absence of a formal law and order system.

However when the first Australian missionaries arrived in the Tufi area in the 1920’s. And established a mission station at Sefoa, their steel tools and axes, kerosene for lighting and soap for washing greatly impressed the Korafe.

That “modern technology” was the catalyst the missionaries needed to convince the local people to embrace Christianity. And abandon their previous ways – basically the villagers believed that somehow the missionaries had more powerful “magic” and so Christianity was the way to go!

Over the intervening years Puri Puri has waxed and waned in the Tufi area. Going from almost being wiped out after the arrival of the missionaries to reaching an all-time high again in 1990’s when over a 100 people are rumored to have died from poisoning.

I had been told that the Puri Puri men administer their spells and potions by chewing secret ingredients from the sea and rainforest with betel nut and then blowing out the concoction from their mouths in a kind of mist.

Johnson confirmed this was true and then explained that actually there are three levels of Puri Puri. Starting with the local village level, whereby everybody knows which herbs and plants can be used to treat common ailments

The next level is also village based with dedicated Puri Puri men who claim expertise in specific areas. Such as traditional medicine, good weather, rain, wind and sun.

For example if somebody is planning a long journey by canoe. They will go and see the weather Puri Puri man and request good conditions for the required time. This is usually obtained by a betel nut based spell being blown on a coconut. Which contains water and is kept undisturbed in a special place for the required time.

The third level is very secret and specialized. Only done by the elders in the Puri Puri villages such as Tuvirade. And is focused in two areas – advanced medical problems and dealing with “bad fellas” who are causing problems in the village.

Johnson explained that for the medical problems there is a kind of network in the Tufi area. So “specialists” in specific illnesses and problems can be consulted as required to heal or counteract a spell or a poison.

The other side of this is that the Puri Puri elders can also induce illness. Even death if necessary to deal with people who are causing problems. These illnesses vary in length, depending on the severity of the problems. These days they only result in death in the most extreme cases as the induced illness is usually enough to straighten out trouble-makers.

I listened intently to Johnson as he explained all this to me. Pausing occasionally to double-check points with him to ensure I had got it right. It was quite an overwhelming experience. Because to my western educated mind none of what he told me made any sense. But there was no doubt that everybody present believed completely in what he had said. 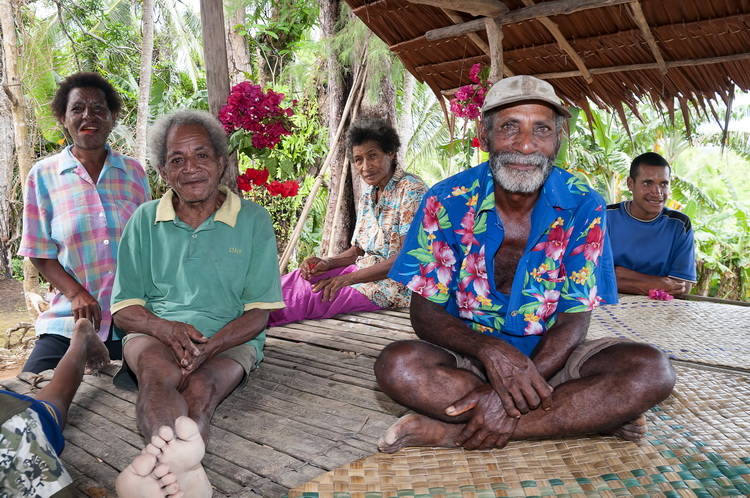 Then Johnson told me that the elders had decided that I should be allowed to visit the “secret place” in the rainforest. This is where all the potions were prepared… So I felt a mixture of excitement at being the first white fella to do so. But laced in with just a touch of fear about what I was about to do.

It took about 30 minutes to get to the bottom of the steep gully that lead to the secret place. And once there I paused  to take a few quick photographs of the location and some of my guides. Then started to rock-hop up the stream.

About 50m up the stream I caught sight of the first Puri Puri guard. Almost invisible in the rainforest in his traditional dress and body & face paint. Then I saw the other two guards whose job is to make sure nobody comes close to the secret place.

A call was issued and Ramsi said it was the all clear to proceed. And 10 minutes later I was face to face with the village’s two main Puri Puri men. Stood in front of the clay pot used to make their potions in. It was quite an eerie experience. Made considerably so by the fact that almost as soon as I arrived the skies opened and it poured with torrential rain! 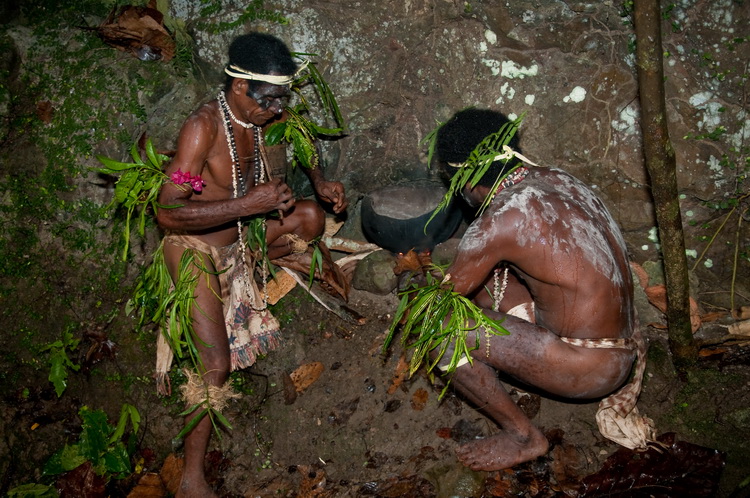 For the next hour they demonstrated how the potions were made. They did this by mixing the ingredients gathered from the rainforest, together in the clay pot over an open fire. This was then baked into a powder-like mixture that is scooped up and stored in bamboo tubes.

The tubes are then placed in a special pouch – that has great significance in the Tufi area… Because everybody knows that when they see one of the Puri Puri people carrying it, serious business is afoot… 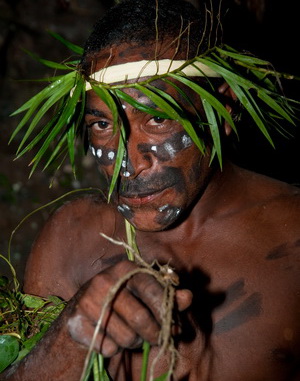 Throughout the process the Puri Puri men wear a ginger-like root around their neck. They constantly chew from it and then “blow” the juices onto their hands and arms. So as to protect themselves from the effects of the potions they are preparing.

When all the potions were completed and stored in the pouch the head Puri Puri man gave Ramsi a nod. This was the sign that my time in the secret place was up and it was time to leave. The walk back out of the rainforest took longer because of the heavy rain that was still falling. But when we got back to Tuvirade the elders were waiting for us… Then it was my turn to answer questions as they asked about my understanding of what I had seen.

Finally after about an hour I thanked them all profusely for allowing me to witness and photograph such a unique event and bade them farewell as we made our way back to the dive resort.

Oro Province, or the Northern Province as it is often referred to, is located on the north coast of PNG’s main island of New Guinea. It has some of Papua New Guinea’s …

Oro Province Overview... This area of Papua New Guinea is quite special. It enjoys an almost unique mixture of awe inspiring scenery, dramatic wartime history and …

The Facial Tattoos of Oro Province are one of the more visually intriguing things about the local villagers in this part of Papua New Guinea. Tattoos, and body art in …

The Kokoda Trail is the location of what many consider to be probably the very finest hours of the Australian Army in WWII. It has a very high emotional connectivity with …

Oro Province in WWII was the scene of some very significant military action. Which started after Japanese forces made a surprise landing at Buna in July 1942. …