The Incredible Australian Leafy Seadragon… Australia is famous for its many iconic and often strange looking creatures. Both above and below the water, but few are as unique and visually spectacular as the Leafy Sea Dragon (Phycodurus eques).

Known locally as “leafies”, they are endemic to the southern and western coasts of Australia. But are most strongly associated with South Australia, where they have been adopted as the state’s marine emblem.

Timid creatures that grow to between 20 and 24 cm in length. They use their ornate leaf-like appendages as incredibly effective camouflage to blend in with their surroundings. Becoming almost invisible to the untrained eye.

Belonging to the same family as seahorses and pipefish, Australian Leafy Sea Dragons are generally brown to yellow in body color. While their spectacular appendages are typically olive-tinted.

They are also able to change their coloration if they need to. Such as when they are in open water and take on the appearance of floating seaweed!

Leafy Sea Dragons are most commonly found among patches of kelp and seaweed. Often in sandy areas and at depths of less than 30m. And they live a mainly solitary existence with a lifecycle of between 5 to 7 years.

It was previously thought that they stay in a specific habitat throughout that lifespan. However, more recent research has shown they will occasionally roam hundred of meters away from those primary locations.

They clearly have a keen sense of direction and are able to navigate back to their primary spots again. Their kelp and seaweed habitats provide ample supplies of small crustaceans such as mysids (tiny shrimp), sea lice, plankton and larval fish. Which they suck up through their long, pipe-like snouts.

Leafy Sea Dragons do not appear to have any specific predators – perhaps the ultimate compliment to their amazing camouflage!

Like all bony fish, leafies use their swim bladders to maintain position in the water column, while two small fins – one on their back close to the tail, provides forward movement while a second on the ridge of the neck allows them to steer and turn their bodies to change direction.

Although the incredible leaf-like appendages look like some form of fin, they actually play no part in how leafies move through the water and are simply there for camouflage.

The overall effect being that Leafy Sea Dragons seem to float majestically through the water!

The Leafy Sea Dragon breeding season is during the warmer months of the southern hemisphere. Starting late in the Australian spring around October and ending in late February as the summer comes to a close.

It is all temperature dependent and triggered by warmer coastal water. But when it happens the males give up their solitary lifestyle to court the females… When mating does occur, the females deposit between 250 to 300 bright-pink eggs onto the spongy “brood patch” on the underside of the male’s tale.

The males then incubate the eggs, carrying them for between 6-8 weeks. Until they are ready to hatch, when the eggs change color from pink to purple or orange. The eggs hatch at a rate of 2 to 3 at a time. And the male assists the hatching by shaking his tail and rubbing it up against seaweed and rocks. A process that typically takes many hours.

When they emerge from their eggs the young leafies are between 4 and 7mm in length. They are completely on their own at first. Surviving initially by living off the still-attached egg capsule until their snouts are developed enough to start hunting.

Leafies are fully grown after about two years and ready to mate. But it is estimated that only about 5% of the hatchlings survive to reach that stage of maturity.

There are three main threats to the survival of Leafy Sea Dragons… Bad weather, loss of habitat and rogue divers poaching them for the aquarium trade and private collectors!

Unlike their cousins the seahorse, leafies have no tail. Therefore they have no way to attach themselves to the kelp and seaweed in their habitats. So harsh weather conditions and the inevitable big waves, can sweep them from their safe havens and wash them up on the shore.

While storms and big seas are part of nature. And, as such, are factored in to overall ebb and flow of their reproductive cycle. There is no doubt that global warming induced changes to Australian weather patterns are impacting these delicate creatures.

Loss of habitat is very difficult to quantify, but is a very real issue with construction and development in coastal areas, together with excessive industrial pollution from fertilizer run-off, being the major causes.

However, the bigger threat is the insidious practice of poaching leafies for the aquarium trade. Where their superb presence in the water makes them so highly prized they are believed to fetch prices of up to $15,000!

Poaching had such a dramatic impact on the overall numbers of leafies that by the early 1990’s they had been formally protected in the states of South Australia, Victoria and Western Australia. Plus, by the end of that decade, they were provided with national protection by the Australian Government.

But… despite those actions the Leafy Seadragon has been classified as “Near Threatened” by the IUCN since 2006. Anecdotal indications by experienced South Australian divers is that before poaching really became bad it was quite common to see up to 30 leafies at the most popular sites.

These days it’s a great day if 3-5 are encountered… So there is clearly a long way to go before these iconic creatures are restored to their former status!

Where to See the Australian Leafy Sea Dragon

The jetties and bays of South Australia, plus the state’s very scenic Kangaroo Island are the best places to see leafies. With Rapid Bay, Victor Harbor, Second Valley and Edithburgh probably the best locations.

Rapid Bay, Victor Harbor and Second Valley are about 85km south of the state capital Adelaide. They are very popular dive sites, while Edithburgh is on the south-east corner of Yorke Peninsula. About 50km west of Adelaide across the Gulf St Vincent but some 225 km away by road.

All are shore dives with easy access in good weather. I have personally had the most success at Edithburgh, although I must say that I was guided… I doubt that, initially at least, I would have been able to find them on my own.

How to See the Australian Leafy Sea Dragon

Because the Leafy Sea Dragon’s camouflage is so effective they are surprisingly difficult to spot. Even when they are right in front of you! So unless you have unlimited time, patience and a particularly strong sense of humor… you will probably be best served by using a guide

On my first trip tp photograph the leafies I was successfully guided by Carey Harmer of Leafy Seadragon Tours. My most recent trips have been with Chelsea Haebich, who is both an excellent guide and very passionate about South Australia diving. Chelsea is best reached currently through Facebook. 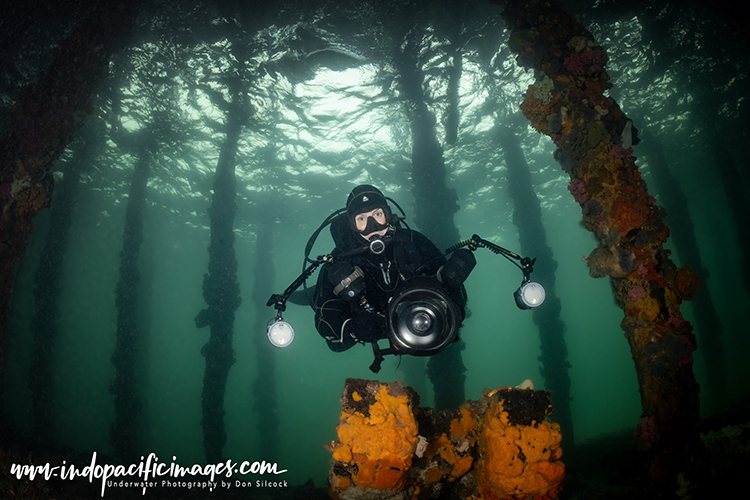 Leafies are very delicate creatures that are very territorial and easily stressed. So great care is needed when interacting with them – particularly if the males are carrying eggs!

Under no circumstances should they be moved up and down in the water column. As their swim bladders are easily damaged by sudden changes in pressure.

Similarly, leafies do not have eyelids and are believed to quite sensitive to bright light. So they should not be exposed to video lights over an extended period or excessive use of strobes.

Overall the Leafy Sea Dragon is an impressive example of Australian marine biodiversity. Encounters with them are truly memorable, but they must be respected and treated with great care!

The highly respected global diving magazine X-Ray published an extensive article of mine on the Australian Leafy Seadragon. As always they did a great job laying out the article!

You can use this link to download a copy of the X-Ray article on the incredible Australian Leafy Seadragon. 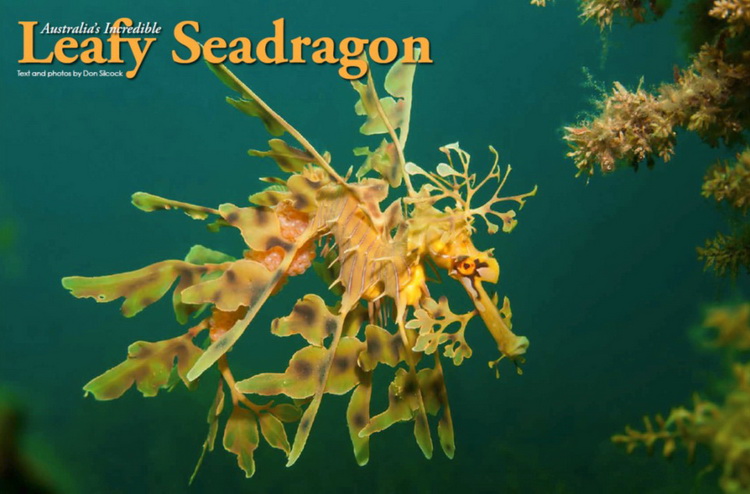 Back To: Scuba Diving in Australia