Chinchorro Crocodiles… The pursuit of unusual and compelling photo-opportunities has led me on some interesting journeys over the last few years. But few come close to the raw excitement of photographing the American Crocodiles of Mexico’s Banco Chinchorro!

The American Crocodile (Crocodylus acutus) is considered as a relatively large species. With males reaching maximum lengths of 5 to 6m when fully mature.  While females are generally smaller at around 3 to 3.5m.

Like all reptiles they are cold-blooded and breath air. So they are most comfortable in warm shallow waters. And the extensive mangroves of Cayo Centro at Banco Chinchorro offer an almost perfect environment for them.

The American Crocodile is actually a cousin of the Australian apex reptilian predator, the hyper dangerous salt-water crocodile. But unlike its antipodean relative, they are not considered to be aggressive towards humans. And only a few (unverified) cases of fatal attacks have been reported

As its common name suggests, they can be found all the way from the Everglades on the southern tip of Florida. Throughout the Caribbean and Central America. And down in to northern end of South America in the countries of Ecuador, Columbia and Venezuela.

With the largest known population inhabiting the land-locked hypersaline Lake Enriquillo in the Dominican Republic. But by far the best place for reliable and up-close underwater encounters with the American Crocodile is Banco Chinchorro, in the south-east of Mexico, near the border with Belize.

Although hardly a household name… Banco Chinchorro is in fact one of the largest coral atolls in the Northern hemisphere and a UNESCO Biosphere Reserve.

Covering an area of almost 800 km²… And located some 35km offshore, the reefs of Banco Chinchorro are very healthy and a real joy to dive.

But if it’s the crocodiles you’re after, Cayo Centro is where you need to be! Although only just under 6 km² in size Cayo Centro is the largest of the three islands on the atoll. And is home to a permanent estimated population of between 300 to 500 American Crocodiles.

It also hosts a small seasonal population of local fishermen. Who have built a scattering of about 10 huts on stilts, called palafitos above the shallow waters of the lagoon on the east shore of the island. And a similar number onshore called cabañas.

Quite how and when the crocodiles took up residence is not clear. But the dense mangroves of Cayo Centro offer the perfect habitat for them. While the rich waters around the island provide plenty of sustenance!

The crocodiles and the fishermen have an almost symbiotic relationship. Tolerating each other’s presence in this remote location. With the main signal for interaction being the noise of the chopping tables.

When the fishermen fillet their catches on tables above the lagoon at the palafitos. And at the water’s edge at the cabañas. The crocodiles will immediately gather when they hear the knives on the chopping boards.

For the crocodiles it’s snack time, while for the fishermen it is automated waste disposal

In-water encounters with the American Crocodiles of Banco Chinchorro are done on snorkel. As it is too shallow for scuba near the palafitos, plus it’s easier to manoeuvre when unencumbered.

Positioning and visibility are the key to safe encounters. And our palafito had some prime real estate just in front of its main porch in the form of a large sandy patch, that stretches out to the left of the hut.

Most of the lagoon has a rich coating of seagrass on the bottom. Which the crocodiles blend in perfectly with when they submerge. Making them hard to spot from the surface. The sandy patch makes it very easy to see who/what is there. And the basic concept is to keep the humans on the sandy patch and the crocodiles on the seagrass…

Mooring the boat moored alongside the palafito, ensures that one direction is blocked. While the sandy patch means that any crocodiles sneaking in can be spotted. And by feeding them from the front of the boat the “encounter zone” is quite well defined and controllable!

The actual control in the water is done with a wooden stick, albeit a large one… but a stick none the less. It is used by the wrangler to warn and calm the crocodile when it gets excited or aggressive. And as a vertical barrier if it advances on to the sand. Despite my initial doubts on its usefulness, it turned out to be remarkable effective!

Of course, all those eminently sensible logistics were far from mind as the time came to get in the water for the first encounter and I was very nervous as I descended the ladder at the back of the boat that first time.

Then, suddenly in front of you is a serious looking piece of reptilian hardware that is watching you as intently as you are watching it. Inscrutable is the word that comes to mind…

Underwater encounters with big animals are rarely if ever static – they move, often constantly and occasionally very fast. Whereas the American Crocodiles of Banco Chinchorro remain completely still. But with a coiled-up energy that is unleashed when they attack.

The problem is that there is virtually no way of knowing when they will attack. So there is an intense tension as you maneuver closer to get good images. Knowing that could that trigger the crocodile to attack. So your are very reliant on that wooden stick and the reaction time of the crocodile wrangler.

Chinchorro Crocodiles – Is it Dangerous?

Probably and possibly are the best descriptors… As there is no doubt that they could inflict serious harm, but nobody has been attacked!

Is it special? Yes, for sure it is – being so close to such large and potentially dangerous reptiles is something else. Plus, the whole experience of staying in the fisherman’s palafito hut with no running water and just a small generator for power is very different!

The wranglers say that the young Chinchorro crocodiles are by far the most dangerous – because they are unpredictable… The big crocodiles may look fierce and very threatening. But they are not particularly aggressive and tend to be much calmer than the young ones.

The wrangler’s golden rule is to never take their eyes off the crocodile – allow them space. But don’t allow them to command that space by using the large wooden stick as a vertical barrier between them and the guests.

The current issue of the global dive magazine X-Ray has an extensive six-page article of mine about the American Crocodiles of Banco Chinchorro that you can download on the link provided. 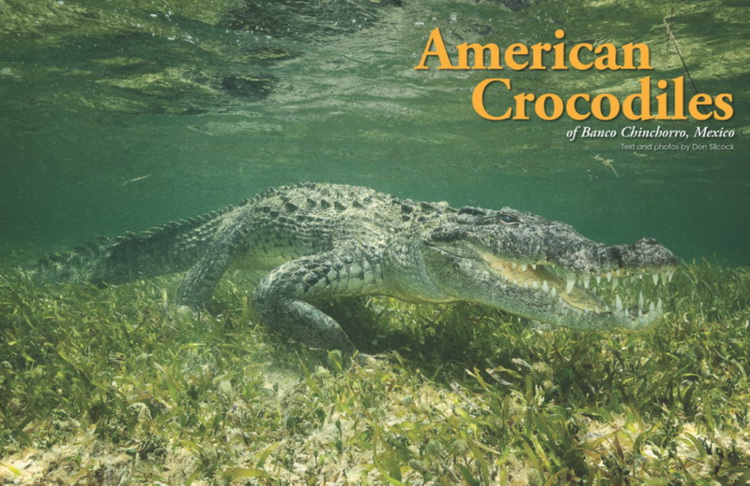 Back To: Underwater Experiences in the Americas 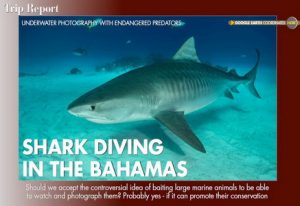 The Tiger Sharks of the Bahamas... Open water (no-cage) encounters with Tiger Sharks are incredible experiences. They are large and extremely …