Conserving Tubbataha… These remote reefs in the Sulu Sea enjoy a stellar reputation for their pristine quality and the random pelagic encounters that often happen there.

And… having experienced them personally on my first post-pandemic international trip. I can personally vouch for the exceptional diving. It really was an awesome experience to be in the crystal clear. Almost iridescent blue waters of the Sulu Sea exploring those reefs. So much so that I would often find myself pausing in wonder at just how good they were!

But there is much more to the Tubbataha story than being a bit star-struck. Because in an isolated part the Philippines there exists a world-class example of how to save a national marine treasure. So, I was really keen to understand how it all came to be… And intrigued to learn the driving force was actually a former dive guide, probably best described as “very determined”.

Conserving Tubbataha – Why It Matters

To understand the importance of Tubbataha you need to know a little about the Coral Triangle and its life-source the Indonesian Throughflow. Both of which are complex subjects, so let me try and do the Reader’s Digest version…

The term “Coral Triangle” is a neat way to visualise the area of south-east Asia universally recognised as having the richest concentration of marine biodiversity in the world.

Covering the Philippines, the eastern halves of Malaysia and Indonesia, Papua New Guinea, the Solomons and Timor Leste, the studies quantifying that biodiversity are both very impressive and much quoted.

In a nutshell though it has been established that the Coral Triangle has roughly three times the species count of the Red Sea and about 10 times that of the Caribbean.

What is harder to understand is just why all that biodiversity is there. Which is where the Indonesian Throughflow comes in. 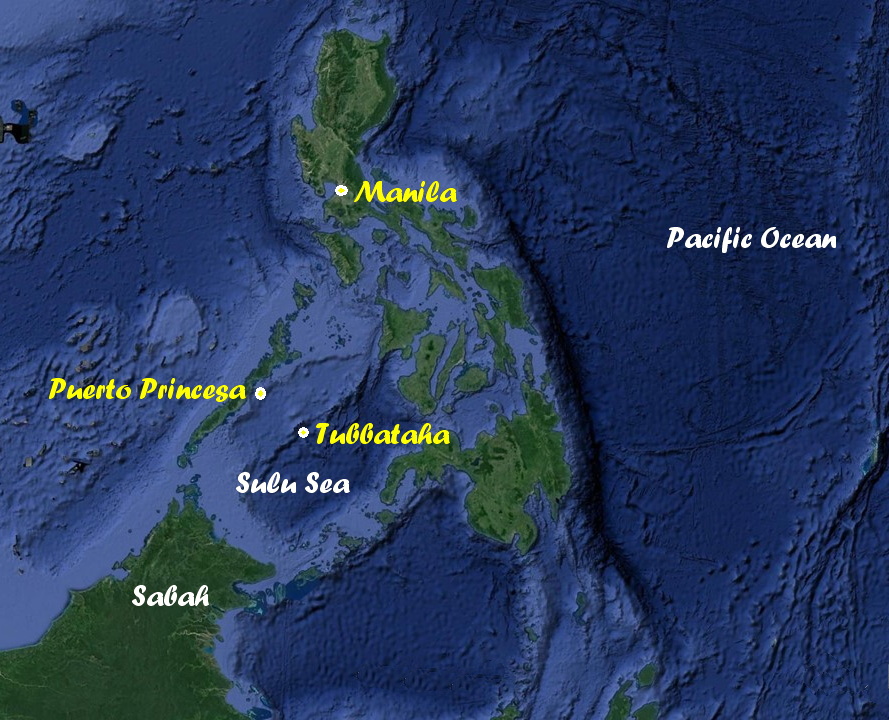 Simply stated, the Throughflow is the largest volume of moving water in the world. So large infact that hydrologists had to come up with a special measurement to calculate it!

Named after its inventor, Norwegian scientist Harald Sverdrup. One Sverdrup is one million cubic meters of water per second. That’s a lot of water and to conceptualise it, think of a river 100m wide, 10m deep and flowing at 2 knots. Then imagine 1,000 of those rivers and that is one Sverdrup!

It is estimated that the total amount of seawater carried by the Indonesian Throughflow is 15 Sverdrups, or 15,000 of those rivers…

That incredible volume of water flows south from the Pacific Ocean. Through the Philippines and the eastern half of the Indonesian archipelago into the Indian Ocean.

With side flows also heading east towards PNG, Timor Leste and the Solomons.

Carried along in it are the eggs and larvae of the Coral Triangle species. And that is why Tubbataha matters – because it’s one of the first cabs in the rank…

Virtually everything that dies in the sea will sink, decompose and become part of the nutrient rich layer that covers the bottom of deep oceanic basins.

As the waters of the Throughflow approach land, or underwater mountain chains like the Cagayan Ridge that hosts Tubbataha’s reefs, they create upwellings that suck up those nutrients.

So… not only does the Indonesian Throughflow distribute the eggs and larvae of the Coral Triangle. It also provides the nutrition to allow them to thrive. It’s a highly evolved, extremely effective and almost perfect supply chain brought to you by nature – doing what it does best!

But it’s also a very finely balanced mechanism. With the 7000+ islands of the Philippine archipelago acting as the “headwaters”… The initial source of the eggs, larvae and nutrients that seeds all that incredible biodiversity.

Then in the 1980’s and 1990’s that fine balance was disrupted by significant over-fishing and exploitation in the Philippines, severely impacting the Coral Triangle.

Heroic figures come in all shapes, sizes and of course genders. Their back-stories are inevitably complex and varied. But the common thread is usually a commitment to do what it takes to make something incredibly important happen.

In the case of Angelique Songco it involved a journey of some 30 years. During which she evolved from a young, very passionate but somewhat unsure dive guide. To become the “Mama Ranger” of Tubbataha Marine Park – a UNESCO World Heritage site.

A journey that required convincing Presidents that something simply had to be done. And overcoming innumerable obstacles to make the whole thing happen!

Songco first dived Tubbataha in 1981 while working as a dive guide on one of the original liveaboards. The first motorised vessels to really visit the reefs.

Tubbataha’s remote location in the middle of the Sulu Sea and lack of fresh water means that permanent habitation is impossible. And prior to those liveaboards the only visitors were traditional fishermen from other parts of the Cagayan Ridge. That isolation and the rich waters of the Indonesian Throughflow combined to make Tubbataha a veritable Garden of Eden.

But within a few years rapidly declining fish-stocks elsewhere spurred fishermen to equip their boats with outboard engines. And risk the long and dangerous journey across the Sulu Sea. Worse still they brought with them the very practices things that had caused so much damage… Cyanide and dynamite fishing. Soon the Garden of Eden was in rapid decline and Angelique Songco had found her raison d’être!

The late 1980’s were turbulent times in the Philippines. With the fall of the President Ferdinand Marcos and the 1986 election of Corazon Aquino – the widow of the assassinated main challenger to Marcos.

Despite the odds against her, Songco marshalled support from the provincial government of Palawan. And managed to get the whole issue of protecting Tubbataha on the new President’s agenda. Aquino recognised the need to “do something”… And in 1988 Tubbataha became the country’s first national marine park. Then, five years later, UNESCO inscribed it as a World Heritage Site.

Conserving Tubbataha – Making it All Work

As wonderful as that story is, creating a marine park and World Heritage Site is really only the start.

Because how can you effectively police and protect a set of isolated reefs some 150kms from the nearest main population centre?

The answer came in 1995 when Songco helped lobby Aquino’s successor… President Fidel Ramos, a former Chief of the Philippines Armed Forces, to make the military responsible for protecting Tubbataha.

Tacit recognition that only they have the resources to enforce the marine park regulations. And a very logical step for Songco, who served in the armed forces for five years before becoming a dive guide.

That decision led to the construction of a small, but self-contained ranger station on Tubbataha’s North Atoll. Staffed by suitably qualified teams from the military living in total isolation on two-month rotations.

The permanent presence allows all the restrictions in place to protect the reefs to be properly enforced. And the results have been stunning with studies of the reefs and atolls showing that by 2015 they have been restored to a near-pristine and truly natural state!

There is little doubt that we humans have collectively inflicted huge damage on our planet and it is easy to feel completely overwhelmed by it all.

My trip to Tubbataha had a double-whammy impact on me. In that initially I was simply stunned at how healthy the reefs were. Everywhere I looked the reefs seemed to be thriving and full of life and I felt incredibly fortunate to just be there.

But as I peeled the onion on why it was so good a second emotion hit me – hope!

Just over 20 years ago the Garden of Eden was being severely damaged by the twin scourges of dynamite and cyanide fishing. Fish-stocks were declining rapidly and it seemed that Tubbataha would go the same way as many other locations in the Philippines.

Then Angelique Songco got mad and decided to try and fix the mess – which tells you two things… We can all do great things if we are determined enough and nature, given some help, can restore itself!

Tubbataha is a truly wonderful showcase that is living proof of that!

Scuba Diver ANZ have published a five-page article of mine on Conserving Tubbataha and you can use the link download a copy. Also, check out the earlier article on on Diving Tubbataha. 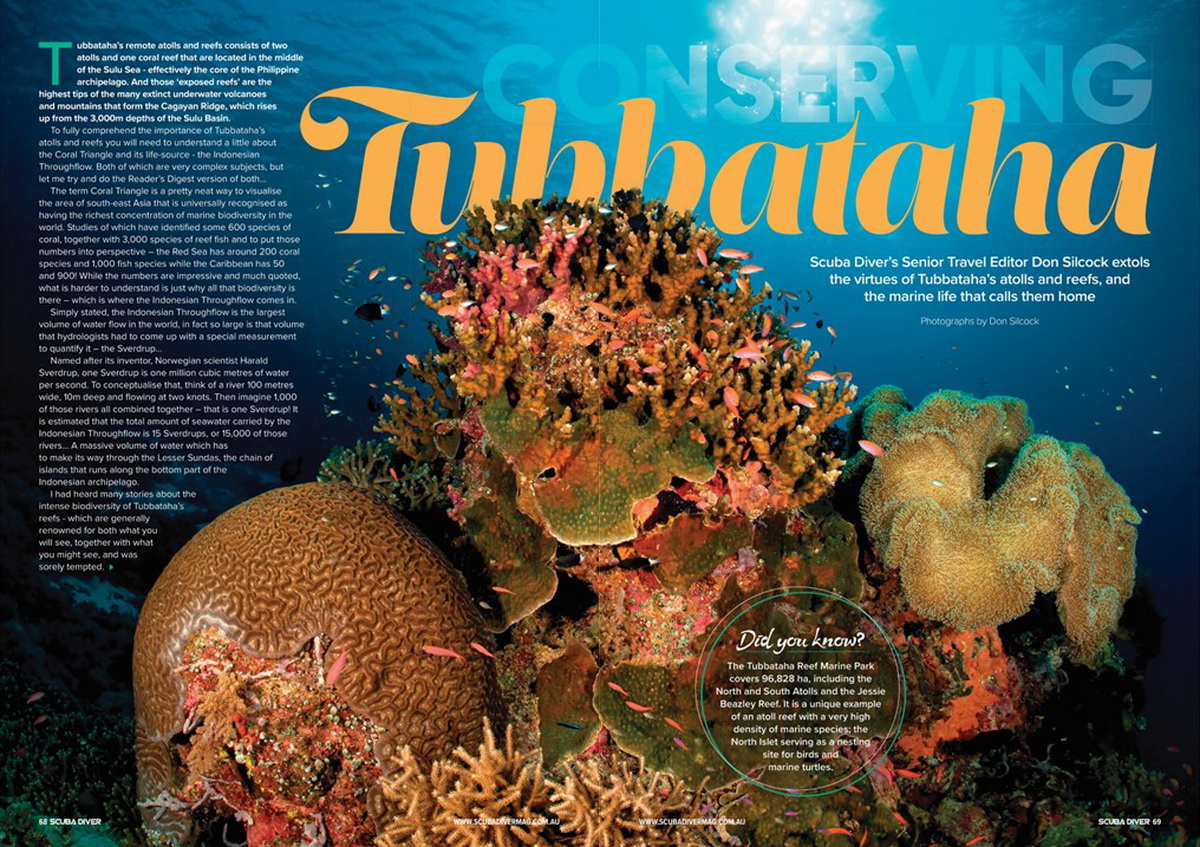