Milne Bay 101… Located around the south-eastern tip of the huge island of New Guinea, Milne Bay is a big place! It covers a total area of some 270,000 km² – roughly the size of the UK.

Centered around the provincial capital of Alotau, the province of Milne Bay is geographically complicated. There is the large area on the “mainland” of New Guinea island and then four main groups of smaller islands: The Trobriands, the D’Entrecasteaux Islands, Woodlark Island and the Louisiade Archipelago.

From a diving perspective, it is probably best to think of the area in two parts. Starting with Milne Bay itself – the large bay on the tip of New Guinea island. Because that’s where all the diving is concentrated.

All the rest of Milne Bay province, which consists of some 600 islands, is rarely if ever dived.

Alotau is the both the capital of Milne Bay Province and the main town in Milne Bay. In fact it’s the only town of any size in Milne Bay…

The town is located in the hillsides of the northern shore of Milne Bay. It’s a small, but safe and pleasant place that became the capital in 1968 when the provincial administrators were moved from the overcrowded former colonial capital of Samarai Island  in the China Strait.

The town has banks, ATM’s, a decent supermarket, hardware stores and a large local market. Plus the main airport for Milne Bay is located at Gurney, about 15km to the west of Alotau.

Milne Bay was a very important base for the Australian Army during WWII.

The base and airstrips were built in dense jungle by American military engineers, defended by Australian soldiers.

The conditions were appalling and all involved knew it was a race against time as the Japanese were preparing an attack.

That attack came in August 1942 and became known as the Battle of Milne Bay.

The Japanese outnumbered the Allied forces and were initially successful with their attack. But by the end of August the Allies had the upper hand and by early September the Japanese withdrew.

Casualties were high on both sides, but particularly so for the Japanese.

The Battle of Milne Bay was significant because it marked the first time that the seemingly invincible Japanese forces were decisively defeated.

The base was subsequently greatly expanded and played a significant role in the war in the Pacific. 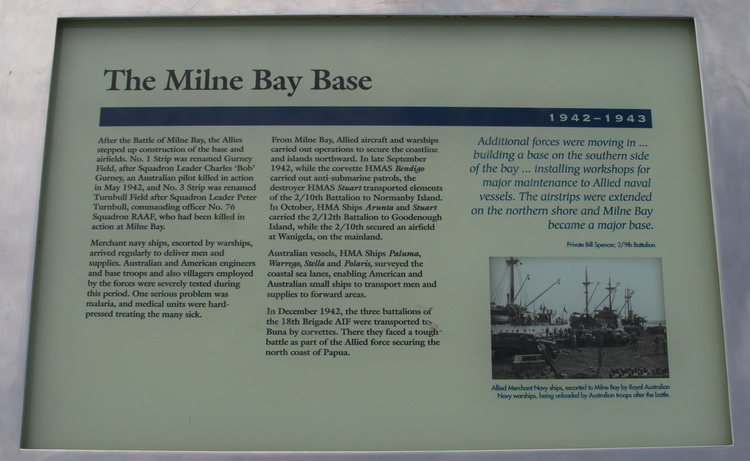