The offshore reefs of Tufi are one of the main draw-cards for divers considering visiting this remote, but incredibly scenic part, of Papua New Guinea.

Located between 5 and 15 nautical miles out from Cape Nelson. The reefs and sea-mounts rise up from the sea bed 200m below and offer some really great diving.

Rarely dived by anybody other that guests at Tufi Dive Resort. They offer a great selection of walls, swim-throughs, hard and soft corals, schooling fish. And.. the chance to see passing open-water pelagics and the occasional great hammerhead shark.

The inner reefs are visited regularly by the resort While the very best time to dive the outer remote reefs is in October and November.

This is the doldrums period between the trade wind seasons when the diving conditions are at their very best with calm seas and great visibility. 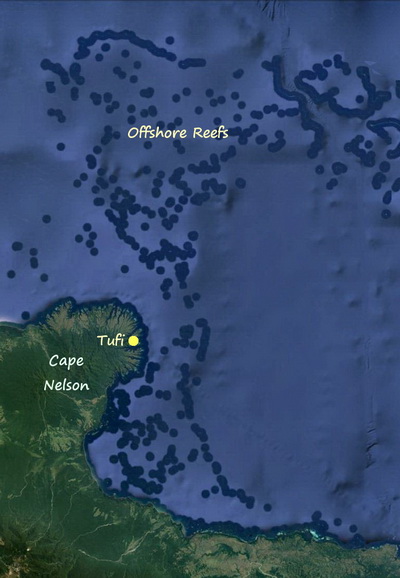 The offshore reefs of Tufi are a mixture of sea-mounts and platform reefs. Bounded as they are by the deep surrounding waters.

Their location means that they sit right in the path of the rich equatorial currents.

Which flow up and down the north-east coast of New Guinea island during the monsoonal seasons.

Only about 25 of the reefs and sea-mounts are within reasonable access time of Tufi and have been surveyed.

While the rest are largely unexplored, but overall the offshore reefs offer some exceptional and adventurous diving.

In the right conditions the diving on some of these reefs is simply sublime.

Most of the reefs are completely submerged. So there is very little if any shelter, which means that good weather is essential to dive them safely.

The resorts dive-boats typically go out everyday to the offshore reefs. However, if the weather looks challenging the sites closer in are the logical choice and those reefs that are farther out are saved for another day…

The vert best time to dive the offshore reefs is in October and November. Which is the doldrum period between the trade wind seasons when the diving conditions both offshore and onshore are optimum.

During the dry south-west monsoon season from May through to September the water in also clear due to run-off reduction but the winds can be strong and it may not be possible to get out to the offshore reefs.

Mullaway is located on the outer rim of the offshore reefs.

Which means that it is about a 1.5 hours journey from Tufi.

Despite the time and distance involved Mullaway is one of Tufi’s signature dive sites and is very popular!

A classic sea-mount that rises up from the sea bed some 200m below, to about 5m on the reef top.

Mullaway is known for its walls which drop down almost vertically to between 30-40m before sloping down to the depths.

The reef is rich with beautiful hard and soft corals teeming with anthias, roaming schools of fusiliers.

Cruising above the reef are the mid-water predators – large schools of jacks and trevally.

One of the best offshore reefs of Tufi, the site is named after a regular visitor from Mullaway in Australia.

Those walls around the reef at Mullaway have a reputation for being the best place to encounter the occasional Great Hammerhead.

Most of those sightings have been on the northern wall where the prevailing current is at its strongest. Creating the kind of rich mini ecosystem that attracts such large creatures. Along with other cruising pelagics such as dogtooth tuna, rays and bronze whaler sharks.

There are two places to anchor at Mullaway. But nowhere to shelter if the wind picks up, so the site it usually only dived in good weather.

Like its next door neighbor Mullaway, Cyclone Reef is on the outer rim of the offshore reef systems.

Spread out over a couple of hundred meters, Cyclone is a large site with three quite distinct and different areas to experience.

Starting with the main reef flat, which is rich with hard staghorn and cabbage patch corals. Plus there are lots of colorful reef fish.

The reef flat is a great place to end your dive as its nice and shallow, plus there is a lot to see and photograph!

Then there is the sheer wall that runs around part of the main reef. Starting in the north and running right down the eastern side.

Close by, and joined by a saddle, is a large bommie.

All three areas offer some great and really diverse diving.

The main reef and the nearby bommie lie north to south. Rising up from the sea bed some 200+ meters below and coming to within 5m of the surface.

The protected lee side of the reef is the location for the anchorage and is an excellent area to snorkel.

The outer reef wall on the western side of the reef slopes down gradually and is an easy and relaxed area to dive.

But it also clearly shows the impact of the heavy dry season seas, with a lot of storm damage

The bommie can easily be circumnavigated in one dive.

There are some nice caves and swim-throughs to explore and the southern wall drops down vertically into the blue.

The site gets its name from Hannah – the tropical cyclone which hit the Cape Nelson area in 1972. When Hannah hit it did so with wind speeds approaching 90 mph. At this specific location those strong winds and very heavy seas created a small island of broken coral.

Cyclone has a big advantage in that it is one of the few outer reefs that also has a sheltered anchorage. Making it the best location to experience what the outer reefs have to offer when the weather conditions are less favorable…

Ellie’s is (for me…) possibly the the best of the offshore reefs of Tufi. It is certainly my favorite site of all the great places to dive in the Tufi area!

A smallish reef site, Ellie’s is located more or less in the middle of the offshore reefs.

It consists of three bommies that rise up from the seafloor some 30m below.

There is much to see at Ellie’s…

The steep walls of the bommies have large gorgonian sea fans feeding on the current.

While out in the blue water there are often passing pelagics and sharks to be seen.

On the eastern side of the middle bommie is a saddle that leads out to a small pinnacle at a depth of about 30m which in my opinion the most picturesque part of Ellie’s.

Time spent on top of that pinnacle is obviously limited because of the depth. But the richness and diversity of the marine growth there is incredible and basically everywhere you look is simply beautiful and a joy to behold! 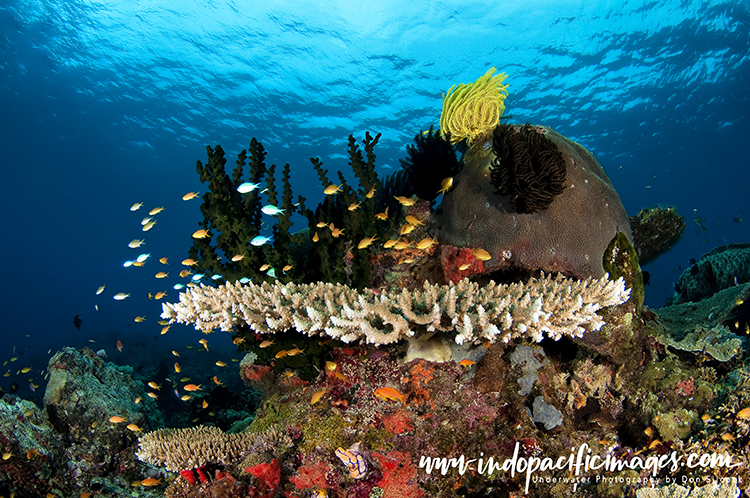 Located among the inner reefs, Bev’s is a relatively short journey from the resort.

It consists of two bommies that are just 5m deep. Which are linked at the top by a saddle at 16m that is rich in soft and hard corals.

The saddle is the best place in the Tufi area to see the quite rare and very beautiful Rhinopias frondosa, or weedy scorpionfish.

There is much to see at Bev’s and the site has a great reputation for manta rays too!

Clancey’s is located in the middle group of reefs near to Ellie’s Reef. It is a very interesting site that combines some spectacular hard and soft corals, together with superb sea fans, on the top of the reef.

Together with some great wall diving around the sides.