Hanuabada is one of only two remaining stilt villages in Port Moresby. With the other being Koki  at the eastern end of Ela Beach. While there is a third stilt village at Tubuseraia on the Magi Highway about 20kms south-east of the capital.

Hanuabada (Great Village) is a Motu village. They, along with the Koitabu tribe, are the original native people of the Port Moresby area. The Motu were originally a sea-going people who lived on the south coast of the main island of New Guinea. The area first settled by Europeans during the colonial period…

The Motu were reknowned for their annual hiri trading expeditions to distant parts of the Gulf of Papua, which were conducted on large sailing canoes called lagatoi.

Basically a multi-hulled raft, the Motu men hand built the lagatoi  by lashing large logs together. Their sails were claw-shaped and made from coconut fiber. With a crew of thirty Motu men was required to sail each boat!

The area of the south coast inhabited by the Motu lays in a rain shadow with a harsh dry season. Which meant that growing enough of the basic staple food sago was very difficult. However the Motu were very skilled in making clay cooking pots – highly prized elsewhere.

So the hiri trade developed and each year the lagatoi  sailing canoes headed westward in to the Gulf of Papua, following the annual south-east  laurabada  trade winds. Taking with them large quantities of clay pots which they would trade for sago.

Their destination was usually a specific village in the Gulf where they were known and trusted from previous voyages.

The outward-bound journey was usually uneventful because of calm seas, and only took about one week.

On arrival the trading was done quickly, however the lagatoi  could not return immediately. Because the crew would have to modify their boats by adding extra hulls to carry the bulky cargo of sago. Plus they needed the seasons to change and the lahara north-west trade winds to start so that they could sail home.

It could take two to three months before the return journey began. And it was with much trepidation that the boats sailed… Because the lahara trade winds are known for heavy seas and big storms. Plus the boats were sailing with heavy cargoes which did little for their overall seaworthiness!

When the lagatoi  canoes did return safely, it was an occasion for great rejoicing – moale.

The annual Hiri  voyages continued until the late fifties when the Australian colonial authorities stopped them following the heavy loss of life after the sinking of a heavily sago-laden and storm-damaged lagatoi.

However a Hiri Moale Festival is now held in Port Moresby each year to celebrate this important part of Motu culture.

Physically located on the northern side of Port Moresby harbor, Hanuabada has a reputation of having retained much of its traditional and conservative Motu culture.

The people are known to be friendly and welcoming. However Port Moresby can be a dangerous place so you cannot just turn up there uninvited and expect to get a red carpet welcome…

You will need to know, or hire, somebody from the village and be invited!

The original stilt houses of Hanuabada were constructed from wood, with thatched roofs. But they were destroyed by fire during WWII and replaced using modern materials supplied from Australia.

As a result Hanuabada has assumed a kind of “pre-fabricated” look… but being on the water has many advantages, such as a degree of natural air conditioning!

Koki stilt village is located at the at the eastern end of Ela Beach. It has somewhat of a mixed reputation… Some sources say it is OK to go there after the general improvements in overall safety in the last few years. 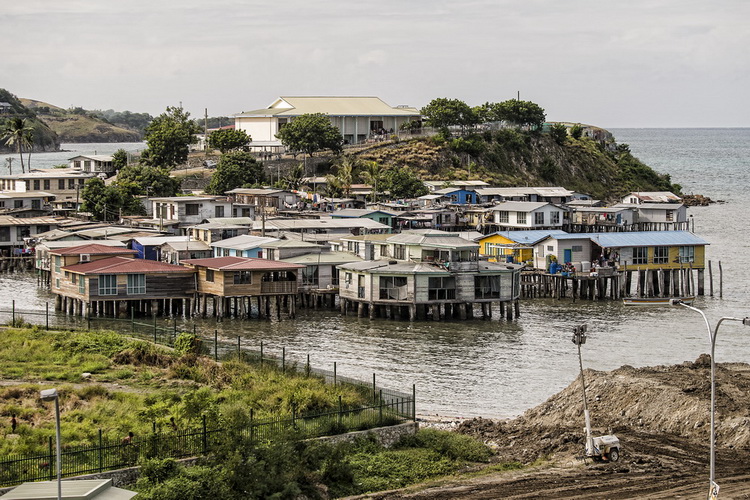 Others will steer you away – so what to do? Last year I spent a few days on business in Port Moresby and in my spare time tried to fill in some of the knowledge gaps I have of the city. Because, like most travelers, I have tended to try and transit through Port Moresby as quickly as I could.

Failing to hire a formal guide who could take me around. I resorted to the time-tested method of asking at guys at the concierge of the hotel I was staying – the Grand Papua. After negotiating a reasonable rate I secured the services of Lucas Killa. A young local guy with the use of a car who wanted to earn some extra money. Figuring that as he was picking me up from the hotel and everybody knew that, I would be pretty safe.

It turned out that he took excellent care of me and was literally watching my back everywhere we went. But when I asked him to take me to Koki he looked at me like I was crazy, making it very clear that the best case scenario would be the loss of my cameras. He did not elaborate on the worst case, so neither did I…

He suggested a compromise and took me up on to a road that overlooks the Koki stilt village and nearby market. Which is the main fresh food and fish market in Port Moresby. Maybe he was being too careful, but I figured that I should take heed the first time around.