Is it safe to go to PNG? That is a question I get asked a lot and the honest answer is no, it is not 100% safe. Yet, where is these days and in my experience the risks are manageable and are far outweighed by the overall experience.

PNG is certainly not without it’s faults. But it is unique country and for the adventurous traveler it offers a pretty special experience.

Although I spend a lot of time in Bali, my home is in Sydney and I have lived there for nearly 20 years now. During which time I can honestly say that I have never had a single situation where I felt threatened or in any real danger.

Does that mean Sydney is 100% safe? No… what it means is that I used my common sense to avoid areas or venues where there could be trouble.

I have been also been visiting Papua New Guinea regularly for over 20 years. I have also never had a single situation where I felt threatened or in any real danger. Also because I used my common sense!

So… should you go to Papua New Guinea? Well, the fact that you are reading this would indicate that two weeks at a beach resort somewhere is probably not your cup of tea. So the short answer (in my opinion…) is yes you should.

Is It Safe To Go To PNG – Port Moresby

Papua New Guinea’s capital Port Moresby  is the only international gateway in to the country. It is also regarded as the most dangerous place in the country. Although Lae and Mt Hagen have poor reputations too.

Therefore the reality of any travel to PNG is that you will have to spend some time in the capital. Whether that is just a couple of hours transit in Port Moresby  to catch a domestic flight to your final destination. Or an overnight stay  because of your connections did not work.

Maybe you want to experience the remarkably good local diving.  With a modicum of common sense, the associated risks can be safely managed if you understand them…

Is It Safe To Go To PNG – Raskols…

That danger is principally from the Raskols that have become a permanent and very negative feature of Port Moresby. And also of Lae and Mount Hagen.

Virtually every expat I have spoken to in Port Moresby seems to have a “near miss” story… Some have stories that are really scary!

But I really don’t think that Moresby is the “near death” experience these stories and the media tend to make it. In reality I believe it is actually the local people that suffer the most from the Raskols.

Because a violent crime against an expat will usually bring severe retribution from the police… Whereas similar crimes against the locals appear to be much more common.

And very little ever seems to be done about them. Apparently very few crimes against expats are planned. Rather they tend to be random and opportunistic occurrences. Whereby a Raskol seizes the chance that has suddenly presented itself.

For visitors to Port Moresby being involved in such a random event is probably the biggest danger you will actually face. And that is only likely to happen if you are particularly careless. Such as walking around unaccompanied with an expensive looking camera or wrist watch. Or maybe a visibly bulging wallet…

Local people in PNG tend to sit on the ground and watch the world go by when they have nothing to do.

This can be very intimidating to the uninitiated visitor who is already semi-paranoid about raskols just waiting to pounce!

While it is unlikely that they will be wearing a T Shirt with “Raskol” on the front to identify themselves. The fact is that you will probably know one should you cross paths with one…

Is It Safe To Go To PNG – Good Sense

So the trick is to use your common sense. Get out and see the things Port Moresby has to offer. But use the guided tours offered by all the hotels to do that.

The guides will know the potential trouble spots. And who the possible trouble makers are and steer you well clear. Just in case you are wondering what a Raskol actually does looks like, check out Australian photographer Stephen Dupont’s image gallery.

Dupont is quite a guy… He specializes in what he calls fragile cultures and marginalized peoples. In 2004 he managed to get to the “Kips Kaboni” (Red Devils) Raskol community and  Papua New Guinea’s oldest gang. They let him to spend time in their midst and document the individuals in the gang.

Apparently it took him several trips to Port Moresby to build the trust needed. But eventually he was able to set up a makeshift studio in their squatter camp in which to photograph his subjects.

Is It Safe To Go To PNG – Safety Tips…

Away from Port Moresby, in the bigger towns such as Alotau in Milne Bay and Rabaul & Kimbe in New Britain I have often wandered around alone and never experienced any problems.

Some excellent general safety tips I picked up from the Lonely Planet are as follows:

– Use a Bilum: Bilums are the locally made colorful string bags that everybody seems to use in PNG. Using one does a lot to neutralize the flashing “I’m a tourist” sign above your head that draws attention to you…

– Raskol money: Have some money ready in your pocket in case you do have a “raskol moment”. Keep the rest of your money well hidden.

– Pay Friday: The locals get paid fortnightly on a Friday and the younger men get on the grog in a big way. Stay well clear… 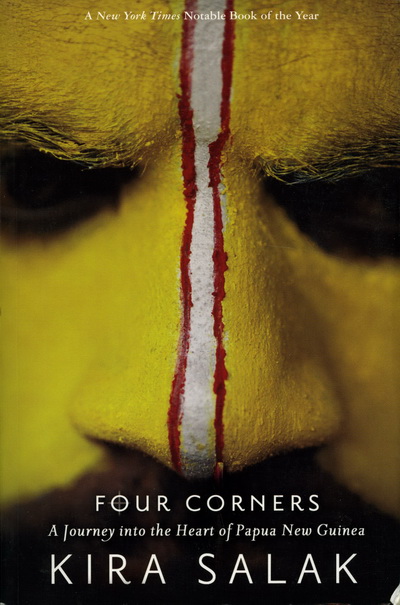 Probably the single most effective book to put the potential dangers of PNG into perspective is Kirra Salak’s excellent Four Corners.

Written in 2001 when she was just 24 years old. The book documents her incredible journey from the south coast of the main island of New Guinea, over the mountain range and all the way to the north coast.

The terrain she crossed and the hazards and dangers she faced are quite amazing. At times almost unbelievable.

That she did at all is an incredible feat in itself. But not only did she succeed against all odds in some of the hardest possible conditions you could imagine. And she did it as a single white female.

It really is an fantastic story. But what makes it such a wonderful book are the insights she provides into some of the local people she met on the her journey who went out of their way to help and protect her.

It made my “adventures” in PNG seem like a trip to Disneyland. I realized that like most things, danger in PNG is a relative thing…

An interesting paper also well worth reading is “Keeping Safe – How international volunteers manage crime & violence in Papua New Guinea” by Joe Weber, who was the Country Director of Voluntary Services Overseas (VSO), a UK based development organisation that provides volunteers in developing countries.

This meant that had the overall responsibility for the safety of the VSO volunteers in PNG. His paper provides a very rational view of the risk and the strategies available to mitigate those risks.

On a recent flight back from Port Moresby I set next to Dr. Olivia Barnett-Naghshineh. Olivia was returning from Goroka, the capital of the Eastern Highlands Province, where she had previously spent a year studying the local women.

We had a really interesting discussion, during which I asked about her experiences of staying safe. Here is what Olivia had to say, which I think is really insightful:

“Papua New Guineans value respect, honest and openness very highly and will treat anyone who is polite, friendly and respectfully with huge kindness. Sometimes a group of people in the street can look hostile as they stare at visitors, but as soon as the visitor smiles at them, there will soon be very smiley people returning the intention. Like anywhere in the world, treat people kindly and not with fear and they will return the favour.

Sharing and gifting are also important to showing humility in PNG, and this will go along way with making good relationships that can keep you safe, and ensure you have an even more wonderful time.

I think one of the common aspects of the various cultures in PNG I have come across is love for other people. Caring for others is a paramount value which has been put under pressure from growing urbanisation and more people being shut out of the growing economy.

Growing inequality has created some issues of crime, but I have also never experienced anything dangerous or scary and suggest listening to local advice always and trusting your instincts rather than listening to any scare stories. Just be humble, respectful, generous and kind and leave any stereotypes heard in Australia or America at the border.”

Papua New Guinea 101... The country is well and truly one of the last frontiers. It has some tremendous scuba diving and many unique and fascinating …