But Wantokism has also become the largest single impediment to the country’s development.

Woven in to that quilt are some 850 different languages. Which is one third of the world’s total languages still in use…

There is also one common tongue – Tok Pisin, the lingua franca spoken by the majority in PNG.

So just like Mandarin in China and Bahasa is in Indonesia, Tok Pisin is is the common denominator in Papua New Guinea.

It functions across all those languages and traditional societies plus the many different ethnic indigenous groups.

In Tok Pisin, wantok means “one talk” – meaning the language of the tribe or clan that a person belongs to. The Wantok system and Wantokism is the traditional welfare system that evolved around that tribe.

In a tribal-based society everything revolves around the relative welfare of the tribe and clan members as a whole. Therefore face-to-face relationships, inter-marriage, kinship and reciprocal exchange are paramount in creating strong ties to keep the tribe together.

Wantokism evolved in PNG as the supporting mechanism for those members less able to looks after themselves. The Wantok system can be thought of as a kind of traditional social safety net that made sure nobody went hungry and everybody had somewhere to live.

It evolved because it was needed and was a good thing! But post-independence PNG is a different place and wantokism has become the lead in the country’s saddlebags. The Wantok system has a significant impact in every area of life in PNG. But particularly so in business and the business of government.

Wantoks who gain a position of responsibility are expected to look after their wantoks… Whether that be in their own small business such as a trade store or small workshop, in an existing business, in the Civil Service or as a politician –

In the business community, wantok business people men or women are automatically expected to make significant contribution. Particularly so when traditional obligations, such as compensation or bride price payments, are needed.

Saying no is simply not an option if the business person wants to maintain their position of respect in the community. Which often leads to money being siphoned out of the business to meet the never-ending obligations. In many cases the Wantok system has lead to bankruptcy.

Wantoks who become senior politicians are expected to contribute even larger sums. And there have been numerous cases where the root cause of false accounting on public works programs has been traced to the need to finance these contributions! 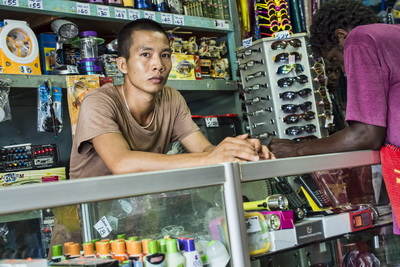 At the opposite end of the scale Wantoks working in the retail sector also have an obligation. Basically they are expected are expected to provide goods at large discounts, or even free, to their Wantoks…

Little wonder then that the Chinese have been so successful in small retail in PNG. They staff the till with family members and guard it’s contents carefully

Here is the link to a paper by Bui Mana. The paper eloquently describes the overall situation with wantoks and wantokism in PNG. While here is another excellent paper written by Grant Walton and David Jackson that details the wantok system in Papua New Guinea.

Papua New Guinea 101... The country is well and truly one of the last frontiers. It has some tremendous scuba diving and many unique and fascinating …