Tofo Dive Sites… There are about 15 significant sites dived on a regular basis in the general area around Tofo.

Those sites can be divided into two main groups. Offshore sites, involving boat journeys of between 30 to 60 minutes. And the inshore ones which are only 10 to 15 minutes away from shore.

The offshore sites are often dived in pairs in the morning when the weather is calmer.

While the inshore sites are typically used when the winds are strong… Or for afternoon dives for those wanting more than two dives a day.

The offshore sites such as Gallaria, Krakatoa and Oasis all have their special things to see. But most divers go to Tofo to see manta rays and and Manta Reef is the signature dive for these encounters.

The inshore reefs such as Salon and Croc Rock are pleasant dives, but pale a little in comparison to the offshore sites! Personally, my three favorite sites are Amazon and The Oasis to the north-east of Tofo and the Manta Reef to the south.

This is a really special place and in the right conditions is simply spectacular. Manta Reef has tremendous overall diversity of marine life, plus  three large cleaning stations. Up to 20 manta rays been seen there having their parasites and dead skin removed by the resident reef fish.

The cleaning stations are on the top of the reef, which is quite flat. While the observation areas are on the nearby walls – below the reef top so that the mantas are not disturbed.

The reef has north and south walls with adjacent pinnacles of rocks creating gullies at depths of 24m to 28m. Which provide shelter for large schools of yellow snapper, barracuda, bigeyes and fusiliers. Plus  hundreds of bright blue, red-tooth trigger fish, tiny goldies and fairy basslets – to name just a few…

Huge potato groupers can be found in the overhangs and small caverns. Along with large trumpet fish, green turtles and schools of sweetlips.

The list of marine life to be seen goes on and on. With the cracks and crevices of the reef home to scorpion fish, many different types of moray eels, crocodile fish, Spanish dancers and a whole array of nudibranches and cowries.

Because of the sheer diversity of the marine life on Manta Reef a standardized route has been established. This allows divers to visit the key spots on Manta reef while minimizing the overall impact on the superb ecosystem.

Amazon Reef is the farthest of the Tofo dive sites site that are dived regularly. It involves a long boat ride of almost 60 minutes, so it can only be dived when the weather is good as there is nowhere to really shelter on the way…

But its a really great site and well worth the journey time to get there.

The site is a horseshoe shaped reef that is reminiscent of an amphitheater. The maximum depth is 28m on the sandy/rocky bottom inside the horseshoe, while the reef top depth varies between 22m and 24m. 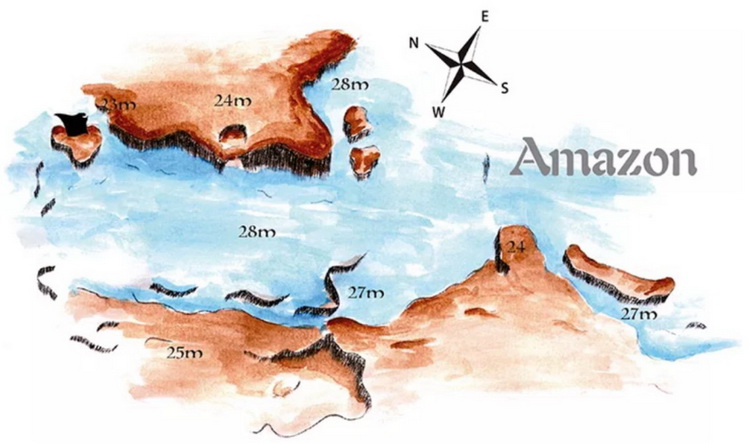 Amazon is an excellent site for spotting white tip reef sharks and leopard sharks, along with large loggerhead turtles. Schooling barracuda circle above and large table-sized fantail rays are often seen around the borders of the reef, along with devil rays and the occasional giant manta.

There is a stunning array of beautiful reef fish in large numbers plus blue-fin travelly and yellow-fin tuna pelagics. And all together it’s a really great site!

The Oasis is another excellent reef to the north-east of Tofo – close to Amazon. So the two are often dived together on one trip, providing the potential for a really tremendous day of diving!

The site is a stunning reef at around 24m with numerous overhangs and shallow caverns with a variety of excellent hard and soft corals.

There are two main cleaning stations that attract manta rays and it is often possible to see leopard sharks resting on the sandy bottom.

It is also quite common to see white tip, black tip and silver tip reef sharks at the Oasis all of which adds to the excitement of the site! Other large rays such as devil rays, blotched fantail rays and Jenkins whiprays are also quite common. While large giant and honeycomb morays eels can be found in the reef crevices.

Shoals of bigeyes, yellow snapper and goldies frequent the reef and often schools of barracuda can be seen above the reef in the blue.