Tiger Beach… Simply stated this shallow sandy area, some 30km north-west of West End on Grand Bahama, is like nowhere else. And, without doubt, it is the best place in the Bahamas to experience sharks – in particular the Tiger Shark.

First dived back in the early 1990’s. The area was known as Dry Bank and had a strong reputation among big-game fishermen for shark action. Only much later did it become known as Tiger Beach. Basically because the first published shark photographs looked like they had been taken at a beach…

Arriving for the first time at Tiger Beach is somewhat of a soul-searching experience. Because it’s one thing to read about the large number of sharks that congregate there. But quite another to actually be there preparing for that first dive!

Particularly so when you realize just how many sharks there are! Many of which are so acclimated, that the arrival of the boat is their signal to gather. It is not unusual for up to a dozen 2-3m sharks to be circling the back of the boat…

The key to safely experiencing the incredible shark action that Tiger Beach is quite simple… Listen carefully to the pre-dive safety briefing, particularly the initial one. And then follow those instructions – to the letter!

The briefings provided on both my trips were extensive and exemplary (different operators…). With everything clearly explained in a logical and non-sensational way. We were told how to prepare to go in the water. How to actually enter the water and then what to do when underwater. Plus we were closely watched and monitored throughout.

But… rolling in off the back of the boat for the first time. After waiting patiently for a gap in the passing fins. Was all together, somewhat of an out-of-body experience! 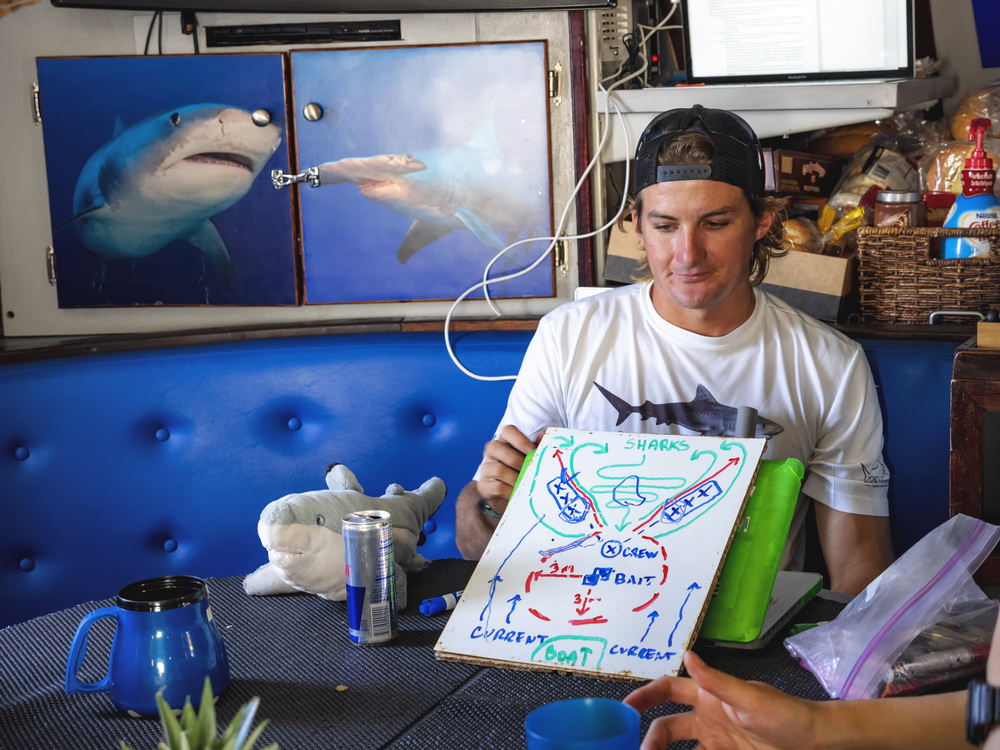 The Eye of the Tiger…

Once underwater however, nerves settle and an awareness starts to form for the sharks and their behavior patterns. From the pushy way the Caribbean Reef Sharks approach and tend to work in a bit of a pack. To the sneaky way the large Lemon Sharks approach low to the bottom. Complete with a leery look straight out of one of those horror movies.

But that new awareness fades to grey when the first Tiger Shark arrives. Tigers are large and formidable creatures with a very commanding presence. One that indicates they know their place at the top of the food chain. They move slowly and confidently, checking out what is going on. And the other sharks clearly defer to them.

As is explained at the initial dive briefing, there are basically two types of sharks at Tiger Beach. Something that has nothing to do with specific species… Rather it is all about the potential damage a bite could inflict! There are large sharks – basically Tiger and Bull Sharks. A bite from which would almost certainly be life-threatening.

Then there are the “small sharks” – which are all the rest… A bite from which would probably be containable by the crew. Although the subsequent medivac might affect your retirement plans!

While the sheer number of sharks at Tiger Beach is initially overwhelming. The reality is that (in all probability…) there is limited danger from the “small sharks”. And the only real chance of being bitten is if you break the cardinal rule of getting too close to the bait box.

They behave very much like hungry dogs and are much more interested in what may be on offer. Which is why you don’t want to get too close to the bait box!

Tiger Sharks, on the other hand, are a different ball game… They are intelligent, curious animals that will often approach divers – particularly so at Tiger Beach! Probably because they sense the tiny electrical signals emitted by our instrumentation and photographic equipment.

They are also known to “bump” with their snouts as they try to understand that stimuli. And there is always the chance that they will use their mouth to do that. Which, given how powerful their jaws are, means that even a gentle nip would be life-threatening.

So you should always know where the Tiger Sharks are and you should always face them. Literally keeping the eye of the tiger in view at all times. Photographers are instructed to use their cameras as a shield – with the strict instruction to let go if a tiger decides to do a taste test. Remember, it’s not about hunger – they are simply curious.

Bull Sharks are also need to be watched carefully as they are both dangerous and sneaky.

Tiger Beach – How It Works

The general area that is Tiger Beach is what you might call “sharky”…. In other words there are a lot of sharks in the neighborhood! To get them to congregate in one location a bait-box is used. Which consists of plastic milk-crates packed with filleted fish carcasses, then “sealed” with a thick plastic top held in place with numerous cable ties. 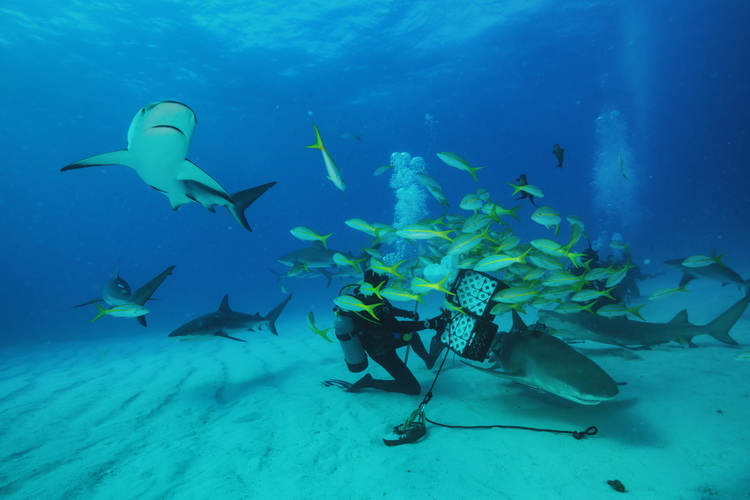 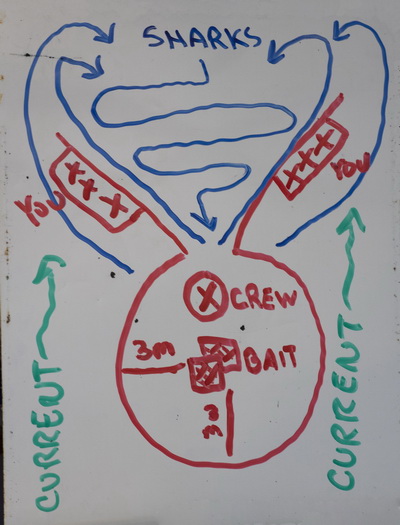 In the water the scent of the dead fish percolating out from the bait-boxes attracts any sharks in the area. But it does not whip them into the frenzy that shark-feeding tends to do.

The boxes are positioned in the current so that the scent of the dead fish is carried downstream. And the sharks swim in to the current up the “runway” to the bait-box.

The guest-divers are positioned at 45 degrees to the left and right of the bait-boxes to get good views of the sharks as they come up the runway.

How Dangerous Is It?

I have been asked this question many times… The honest answer is undoubtedly there is a level of danger from being in open water with a large number of sharks. But the real question should be is that level of danger manageable… and my opinion is yes, it is.

The key to it is making sure that the participating divers understand and follow both the Rules of Engagement and the instructions provided at the initial briefing. And that was very much the case on the trips I have personally done

In actual fact, I think the most dangerous part of diving Tiger Beach is complacency. Because once you have been there a couple of days, it is easy to start thinking you are in some kind of petting zoo… Sharks are everywhere, but they seem to avoid you and a feeling of superiority and invincibility starts to build.

That is the dangerous bit, because these are wild animals – they grace you with their presence. But the overall engagement is very much on their terms. And they can switch from docile to threatening in a millisecond.

That said, if you want to experience sharks up front and personal, Tiger Beach is the place. There is simply nowhere else like it!