Timor Leste Overview and History… First colonized by the Portuguese around 1520, the country is officially known as Timor Leste.

But more commonly as East Timor and it has had a long and troubled history. With an incredibly traumatic birth as an independent country.

No visit to the country should really be considered without a basic understanding of these events. Because they really are fundamental to the ethos of Timor Leste.

The Portuguese first landed near Pante Macassar on the north coast of the island. In what is now the enclave of Oecusse in the Indonesian western half of the island.

The were actually looking for the fabled spice islands of the Moluccas – the source of the incredibly lucrative spice trade… When they stumbled upon the island of Timor and its vast stands of sandalwood trees. Highly prized for their aromatic oil.

By the end of the 16th century Holland, in the form of VOC – the Dutch East India Company, had arrived in the area. Armed with bigger, better ships and guns, together with much stronger financial backing than the incumbent Portuguese. The Dutch quickly dominated the area from their main base in Batavia – now called Jakarta.

By 1613 they had gained control of the western half of Timor. Forcing the Portuguese in to the eastern half and the two countries continued to skirmish until 1860. When, in true European colonial fashion, this defacto arrangement was formalized with a treaty partitioning the island. With the western half becoming Dutch West Timor. And the east becoming Portuguese East Timor, together with the enclave of Oecusse.

Then in 1949 the Dutch formally withdrew from the East Indies and the Republic of Indonesia was born. West Timor was incorporated in to the new country, while East Timor remained under Portugal’s control. The Portuguese departed abruptly in 1975 after political turmoil and a military mounted coup d’état in Lisbon. Effectively abandoning the territory after 455 years of colonial rule.

The sudden withdrawal of the Portuguese left East Timor extremely vulnerable. And on the 16th July 1976, just nine days after the Democratic Republic of East Timor was declared an independent nation, Indonesia invaded and annexed it. 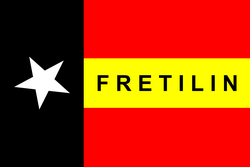 With the benefit of 20/20 hindsight… It is tempting to view the Indonesian invasion through the prism of Realpolitik – as the specter of communism was still stalking South-East Asia.

The left-leaning Fretilin government appeared to be a potential communist state. President Suharto of Indonesia was the west’s new best friend after the troubled years under his mercurial predecessor Sukarno.

But that ignores the broader reality. It also does little to mitigate the results of the invasion… Or the 200,000 East Timorese that Amnesty International estimated died from either military action, starvation or disease from 1975 through to 1999 – roughly one third of East Timor’s population.

Or the  estimated 300,000 East Timorese the U.S. Agency for International Development estimated were moved into camps controlled by Indonesian armed forces.

The critical turning point for the independence movement in East Timor came with the Dili Massacre in 1991.

The cold-blooded slaughter of at least 250 East Timorese by the Indonesian military was witnessed by two American journalists, Amy Goodman and Allan Nairn.

It was also caught on videotape by Max Stahl, who was filming undercover for Yorkshire Television.

The video footage was smuggled in to Australia, despite the best efforts of the authorities in Darwin to seize it. In January 1992 the footages was released publicly in the UK documentary In Cold Blood: The Massacre of East Timor.

The graphic footage and eye-witness reports resulted in global outrage. Together with a ground swell of support for the charismatic leaders of the independence movement – Xanana Gusmão and José Ramos-Horta.

The fall of Indonesian President Suharto in 1998, and the elevation of the unpredictable B. J. Habibie, to replace him was the trigger for a UN-sponsored agreement between Indonesia and Portugal that allowed a UN-supervised referendum in August 1999.

The result of the referendum was a resounding vote for independence. An outcome that although widely expected, was taken very badly by the Indonesian military. Who promptly retaliated by organizing and sponsoring anti-independence Timorese militias.

Those militias implemented what was effectively a scorched-earth campaign of retribution> Killing over 1,400 Timorese and destroying around 70% of the country’s infrastructure. Including homes, irrigation and water supply systems and schools. Together with virtually 100% of the country’s electricity generation and distribution system.

The arrival of Australian-led peacekeeping troops – the International Force for East Timor (INTERFET) on the 20th September 1999 brought the violence and destruction to an end and on the 20th May 2002, Timor-Leste was formally recognized as an independent state with Xanana Gusmão sworn in as the country’s first President.

Diving Timor Leste - also known as East Timor... and whatever you call it this is a quite special country. One that suffered so much to gain independence …

Scuba Diving in Timor Leste... There really is some excellent diving to be had in Timor Leste! With sites ranging from beautiful bommies and coral …

The Complete Guide to diving Atauro Island in Timor Leste. The island of Atauro is located just off the coast, to the north of Timor Leste's capital …

Timor Leste - Dive Sites East of Dili... As you head east out of Dili, along the scenic coast road towards the town of Manatuto, you will pass numerous …

Timor Leste – Dive Sites West of Dili... The coast road westwards from Dili takes you to the small town of Maubara. Which hosts the two main dive …

Dili Dive Sites... There are three local sites in Timor Leste's capital city that are dived quite regularly. All three are quite different and offer …

Timor Leste Overview and History... First colonized by the Portuguese around 1520, the country is officially known as Timor Leste. But more …