Swimming with humpback whales in Tonga is truly a special experience. This island nation is one of the very few places in the world where you are allowed in the water with humpback whales. And experiencing these large, inquisitive and mild-natured animals in the unique setting of the Tongan archipelago is pretty unique!

Often referred to as gentle giants. Simply being in the water with humpback whales is an incredible, if initially somewhat overwhelming, experience.

When the King of Tonga banned whaling completely in 1978 it was a quite unpopular decision. Because in a country that has virtually no industry and where subsistence living is the norm. Remittances from expatriate Tongans are a principal source of income. And so the humpback whales were perceived as a plentiful natural resource that provided valuable additional sustenance and income.

Despite on-going pressure from some sections of the population (together with targeted influence from the main whaling nations…). The ban on whaling has stayed in place and given the increasing revenue from whale watching in Tonga it is unlikely (hopefully…) it will ever be rescinded.

It has been estimated that each humpback that returns to Tonga every year of its 45-50 year lifespan is worth US$1m in whale-watching revenue. Clearly demonstrating that live whales are considerably more valuable than dead ones!

The government granted the first permits for whale watching in Tonga in 1992. And somewhat controversially authorized operators to conduct in-water “swim-with” encounters. Quite why they took that big step is not known, but the probability is that it was done to give Tonga a competitive advantage.

Tonga is a long way from everywhere and lacks the cachet of Fiji (it’s closest neighbour tourism wise) and its posh resorts. So offering a unique wildlife experience like swimming with the humpbacks makes a lot of sense from a marketing angle.

However what does it do to the whales? Many have made the point that given the slow recovery rate of the “Tongan Tribe” there are valid concerns that such interaction stresses them – particularly the mothers and their calves. 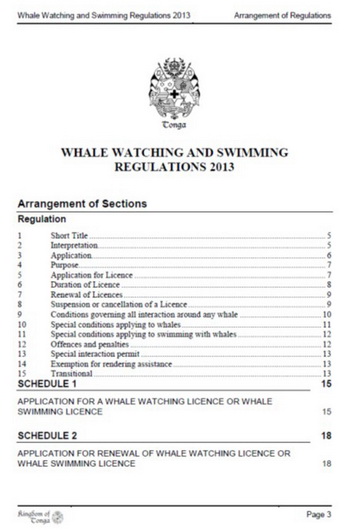 There are a very clear set of rules and regulations in place for whale watching and whale swimming in Tonga.

They govern the number of boats that can be near the humpbacks. How close they can go, how long they can stay and the overall interaction with the animals.

As such those rules and regulations are very clear. But the counter argument is that they rely on self-regulation and nobody is out on the water checking…

My experience was that the rules are followed. My guide, together with the crew that supported him, really did care about the welfare of the whales. Particularly the mothers and their calves.

Any signs of stress at our presence in the water was the cue to immediately back off and leave them alone.

Back To: Humpback Whale Swimming in Tonga

The Humpback Whales of Tonga... A complete guide to help you plan that once in a lifetime trip to see the Tongan Tribe of southern …

The Tongan Tribe of Humpback Whales... Every year, as the cooler winter months come to the South Pacific. The waters of the island nation of Tonga play host to …

Tonga humpback whale encounters are special and quite unique experiences... They really do rate up there among the best in-water interaction …

Humpback Whale Swimming in Tonga... In a country with no major heavy industries and only a limited agricultural sector. Humpback whale swimming in …

The Tongan humpback whale migration begins when winter descends on the Antarctic. And by May, as the average day-time temperature falls to around …

Tonga 101 - the Pacific island nation of 170+ islands stretched out across an 800 km long archipelago... Physically and culturally located on the …

Tonga's Polynesian culture is worth spending a bit of time to understand... The country is an interesting place with a very "South Pacific" laid-back feel to …