Cuttlefish conservation in Whyalla has been somewhat of a long, but ultimately (for now at least…) successful journey.

Talk to the local divers who have been around for a while and they will tell you an interesting story. Incredibly, they did not think there was anything that special about the annual giant Australian cuttlefish aggregation.

They assumed that similar events must be occurring elsewhere… Yet, as word spread, marine biologists and scientists from around the world came to see for themselves. And as they did, the exceptional nature of the aggregation became clear.

Basically nothing like the Whyalla aggregation is known to happen anywhere else in the world! A great story, no doubt… But if it were not for the tremendous efforts of some of those local divers. And nature’s amazing capability to restore itself when we get out of the way. The chances are that it would now be significantly different story!

Cuttlefish Conservation in Whyalla – But Why Whyalla?

In all probability the annual aggregation has been happening for hundreds, if not thousands, of years. The giant Australian cuttlefish is a short-lived animal with a life-cycle of one to two years. It is also semelparous, which means it has a single reproductive episode and then dies. While us humans (and most animals) are iteroparous. And therefore capable of multiple reproductive cycles over the course of our lives.

The main aggregation area around Point Lowly and Black Point is perfectly suited for the purpose the cuttlefish have adopted it for. Because it’s relatively sheltered and, unlike much of the upper Spencer Gulf which is mainly sand, sea grass flats and mud banks. There are numerous shallow rocky reefs which are perfect places for the females to hide their eggs.

So, here is a species that has evolved and thrived in a very specific manner. Since it has the almost perfect location to ensure its propagation – then along comes man…

1997 was the year that things changed significantly for the giant cuttlefish of the upper Spencer Gulf. About 250,000 of them, roughly 250 tonnes, were taken during the annual aggregation by commercial fishermen for export to Southeast Asia.

Up until 1997 there had been very limited recreational and commercial fishing of the cuttlefish. But, so lucrative was the 1997 catch, that the word spread. And in 1998 a much larger contingent of boats arrived in Whyalla even before the cuttlefish did!

Within 4 weeks an estimated 150 tonnes of cuttlefish had been harvested. The stock was so devastated there was basically not much left to catch!

After much local lobbying the South Australian Primary Industries Minister stepped in. And, in a widely applauded decision, closed the area to fishing until September 1998. Plus, a three-year assessment of the overall situation was ordered. 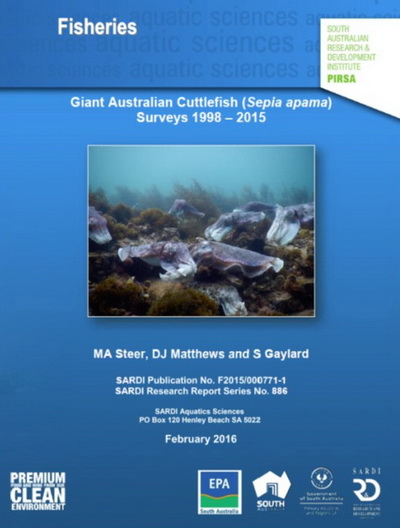 In 1999 SARDI (South Australian Research and Development Institute) assessed the upper Spencer Gulf population at 182,585. While their subsequent surveys in 2000 and 2001 showed similar, but slightly less numbers.

SARDI commenced their surveys again in 2013 and recorded a total population of 13,492…

Cuttlefish Conservation in Whyalla – The Numbers…

Those terrible numbers in 2013 prompted a total ban on catching cuttlefish in the upper Spencer Gulf. Significantly the SARDI survey in 2014 recorded a population of 57,317 in 2014 and then 130,771 in 2015. Which would indicate that the total ban is working.

But the total population is still well below where it was after the terrible events of 1997 and 1998.

So for now at least, it looks it looks like the immediate danger may have passed. And we can thank the tremendous lobbying efforts of the local Whyalla diving community for that!

Back To: Giant Australian Cuttlefish Guide

The Giant Australian Cuttlefish, Sepia apama, is the largest cuttlefish in the world. Fully grown, they can reach half a meter in overall length and weigh …

It has been described as “the premier marine attraction on the planet”. And yes indeed... the annual Whyalla Giant Cuttlefish aggregation really …

Cuttlefish conservation in Whyalla has been somewhat of a long, but ultimately (for now at least...) successful journey. Talk to the local divers …

Photographing Giant Australian Cuttlefish... The annual aggregation in Whyalla is for me right up there with the best underwater photography …

Overview of Whyalla and Diving Logistics... A trip down to South Australia for the annual cuttlefish aggregation is really quite …