The Florida Manatee… Kings Bay in Crystal River is probably the best place in the world to see and photograph the quite unique creature that is the Florida manatee. Because every winter, as water temperatures in the Gulf of Mexico drop to the low 70’s Fahrenheit. Hundreds of Florida Manatee migrate up the Crystal River to seek refuge in the warm waters of Kings Bay.

The peninsular that makes up most of the state of Florida is formed by a large plateau of karst limestone. Which sits on a massive subterranean platform of bedrock which stretches far out in to the Gulf of Mexico.

Within that limestone is one of the world’s most productive aquifers – the massive Floridan Aquifer.

And instead of running off into river systems, the state’s regular and heavy rainfall percolates down in to the many underground chambers that form the acquifer.

As new water makes its way in to those underground chambers. Hydraulic pressure forces previous rainfall out in areas where those chambers are closest to the surface. Such as Kings Bay in Citrus County.

The water that emerges in those natural springs is extremely clear, having been thoroughly cleaned by the percolation process.

In an area covering about 1 square mile. Kings Bay has between 70 to a 100 natural springs (depending on whose opinion you accept). 15 of which are significant “first magnitude” ones.

Combined they pump out some 300 million gallons a day. All at a constant temperature of 72 deg F, filling the bay with warm water. And forming the head waters of the Crystal River which flows out in to the Gulf of Mexico.

This constant flow of warm water is the reason why hundreds of the Florida manatee arrives there every winter.

For, despite its rotund appearance, the Florida Manatee has virtually no body fat or blubber to keep it warm. At water temperatures below 68 deg F manatees simply cannot maintain their core body temperature. Unless they find a source of warmth, they will die of cold stress!

The warm waters of Kings Bay allow the manatees to restore their core temperature and survive the cold snap.

The Florida Manatee is listed as “endangered” and fully protected by State and Federal legislation. But in Crystal River tourists are still allowed to enter the water with them and enjoy limited interaction.

Crystal River is simply the only place in the USA where that is possible! But on busy days conditions are far from ideal and quality interactions are highly unlikely 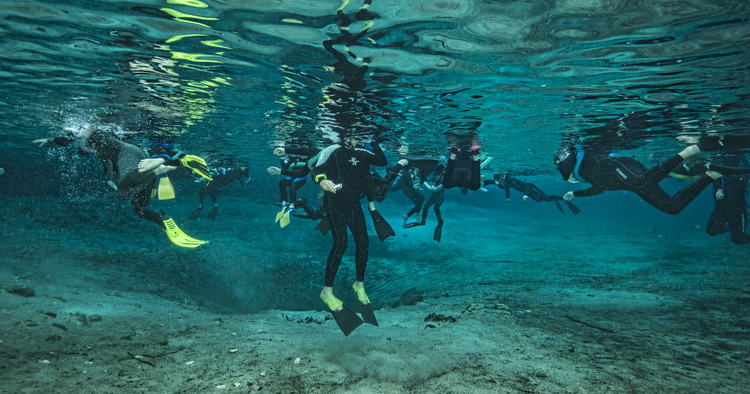 I spent 10 days in Crystal River photographing and experiencing the Florida Manatee first hand. In the water at 07.00 every morning and several times throughout each day. My encounters and interactions with the Florida manatee in the Three Sisters Spring and canals of Kings Bay varied…

On one end of the scale it could be called a “drive-by manateeing” with the manatee clearly not interested. Somewhere in the middle was watching significant numbers of manatees sleep in the springs and sanctuaries. Which is not exactly the most interesting thing in the world!

Then there was those incredible moments, usually fleeting, where a manatee would approach to check you out. You could easily fall in love with them at that point in time – they are so cute.

They really are a unique creature! I documented the whole experience in the compete guide to the Manatees of the Crystal River as detailed on the sidebar of this page.

I have also wrote an extended article for the highly regarded Anima Mundi wildlife magazine. Which also got me the front cover image!

You can download the Manatees of the Crystal River article on the link.

Back To: Compete Guide to Crystal River Manatees 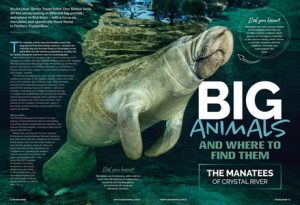