Diving Tulamben… Simply stated, Tulamben is scuba diving. And this small town on the north-east coast of Bali owes its relative prosperity to the constant flow of divers. Who come from all over the world to experience its principal attraction – the Liberty shipwreck.

While diving may be it’s life-blood. Tulamben’s life-source is Mount Agung, the large volcano the town sits in the shadow of.

Tulamben’s life-blood and life-source are inextricably linked… Because it was the massive eruption of Mount Agung in 1963, and the subsequent earthquakes, which created the shipwreck. Physically lifting the grounded remains of the Liberty from Tulamben beach. And rolling it unceremoniously down the slope to its final resting place some 40m offshore.

The Liberty was left on its side with its back broken. With the stern just 3m below the surface and the bow down in about 28m.

The eruption of Mount Agung was a major disaster for the people of northeast Bali. With an estimated 2000 people believed to have died and around 100,000 made homeless. It occurred on the 17th March 1963. But the volcano had become active again the previous month. When, after laying dormant for almost 300 years, it started to rumble ominously.

The eruption produced rivers of lava that poured down the slopes of Mount Agung. Decimating huge swathes of northeast Bali in the process. Much of that damage is hard to tell these days when viewed at ground level. As it is now mostly covered over by vegetation. But that took a long time to happen. Because, unlike the rest of Bali which enjoys a lot of rain, Tulamben does not. As it sits in the rain shadow of Mount Agung.

The Google Earth view below does however illustrate those lava flows. And one can only imagine the combined destruction wrought by them and the earthquake on the local population. 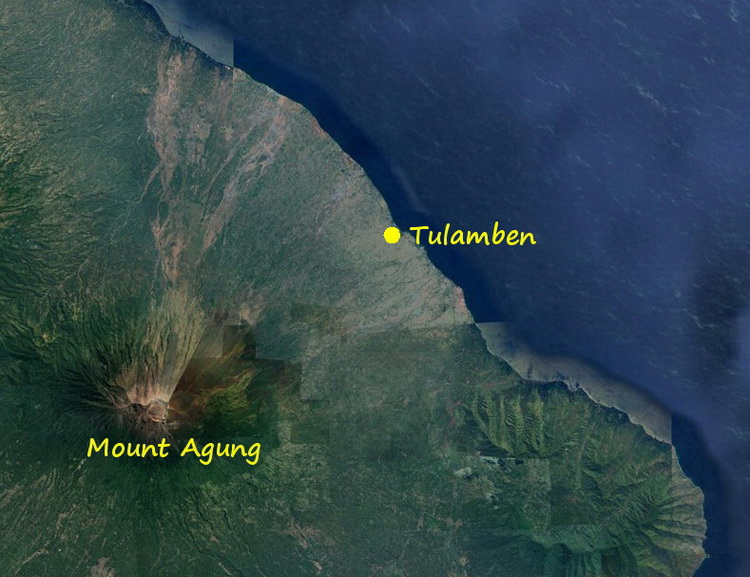 Diving Tulamben – How It Started…

Diving Tulamben began around 1979 when some local diving pioneers discovered what an excellent wreck site the Liberty had become in the 16 years since the explosion of Mount Agung.

Back then there was virtually no accommodation available in Tulamben and no way to charge cylinders or hire equipment. So if you wanted to dive the Liberty it meant a long day trip from the south of the island. Bringing everything required with you. But as the word spread about the wreck, more and more divers made that day trip.

Leading to the first diving resort, Dive Paradise, opening in 1986 – allowing overnight stays and extended diving of the area. Over the years this has grown significantly and there are now several well long-term resort operators. Such as Mimpi, Matahari, Tauch Terminal and Tulamben Wreck Divers established in “downtown” Tulamben. All offering both day diving and extended stays all with experienced guides.

There has also been a significant increase in accommodation built right by the wreck. And there are now villas on the beach just west from the main entry point.

Plus slightly further west, and claimed to be within 150m of the wreck, is the Liberty Dive Resort which opened in 2011.

It is really amazing to see how much Tulamben has grown over the years. To the point that it is now prime real estate and all because of the Liberty wreck!

Many of the tourists who dive the Liberty wreck come to Tulamben for the day. Usually leaving their hotels in the south by six in the morning to make the 3-4 drive to Tulamben.

So many day divers make the trip that a dedicated amenities area has been built near the beach.

This allows the buses and cars used to transport everybody to park in an orderly manner. Plus there is a shower and toilet area so that gear can be washed down, salt rinsed of bodies and calls of nature answered before the long trip back south. 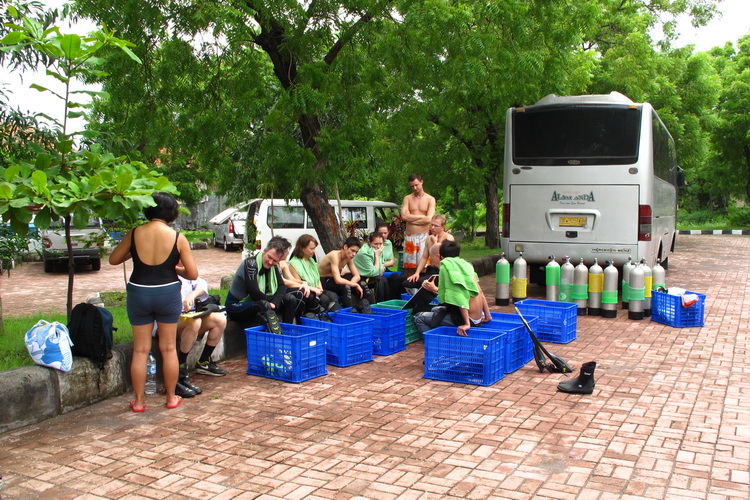 Although the Liberty wreck is why most divers go to Tulamben, the area is very rich and really deserves more time if you can spare it. Tulamben Bay is nourished by eddies from the Indonesian Throughflow. Which means that it receives a flow of water extremely rich in organic nutrients together with planktonic eggs and larvae.

It is this flow of water, together with the run-off from from Bali’s rich farmlands, that create the conditions that transformed the Liberty wreck from a rusting hulk in to a magnificent artificial reef in a matter of a few years. That same flow of water has also created some other really good dive sites in Tulamben Bay. So stay a bit longer and sample them for yourself!

The main sites in Tulamben Bay besides the Liberty wreck are the Reef – often referred to as Paradise Reef because Dive Paradise was the first resort in Tulamben. The Drop-Off at the southern tip of the bay and Batu Kelebit round from the southern headland.

All those sites deserve significant attention and are good dives. Particularly Batu Kelebit which has an awesome reputation for being the place to see the “big stuff” when the conditions are right.

Tulamben Bay is a very rich and bio-diverse area. And if you stay long enough you would ultimately see a tremendous selection of what the Indo-Pacific region has to offer. From sharks, mola-molas, mantas and other pelagics cruising around the Liberty wreck, the Drop-Off and Batu Kelebit. To pygmy seahorses, ornate ghost pipefish and coral crabs to name but a few on the wreck and the main reef.

But you are likely to miss the majority of these is you are diving with out a guide. The Tulamben dive-guides know these sites well plus where and when to look for what is there. And they know what divers and underwater photographers want to see…

So do yourself a favor and get a good guide – it’s money well spent!

The very best time for diving Tulamben Bay is October and November. After the southeast (dry season) monsoon has ended, but before the northwest one (wet season) has begun. Because that is when you will get the calmest conditions

The period at the the start of the southeast monsoon in May, June and through to about mid July also offer good conditions. But after that for about 2 to 2.5 months high winds create rough seas and poor conditions. Around the end of September the conditions start to improve again.

Generally from December through to early April, when the northwest monsoon is at its peak, there are strong winds and rough seas.

One of the most interesting aspects of diving Tulamben are the female porters that carry your dive equipment down the beach.

Without fail, everybody who goes to Tulamben is astonished at how it works!

The beach at Tulamben is not white sand, in fact it’s not sand at all… Instead it consists of black volcanic stones formed when the lava from Mount Agung’s explosion cooled and then cracked. Their edges rubbed smooth and slippery by the daily tides that roll the stones up and down the beach.

They are really tough to walk on, even when you are not carrying anything.

So when you first see a petite Balinese lady, walking down the beach with two complete scuba rigs balanced on her head it’s quite a surprise! Often she will be accompanied be her daughter doing the same – sometimes complete with a baby…

They are from the “Diving Helper Club” – an initiative started by the villagers when divers first appeared in any number at Tulamben. Initially is was a group of 30 women who arranged to have 20 of their numbers always available on any given day. But the sheer number of people who are diving Tulamben means that there are now many more village women working as porters.

The system works really well, whether you are day diving or staying at one of the resorts. As the porters just seem to appear when they are needed – nonchalantly hoist at least two sets of gear on the heads before heading off down the beach.

The group operates as a collective and pool their earnings and tips. With their fees are paid by the resorts and dive operators. So make sure you give them a reasonable tip, because they really deserve it!