The B25 Mitchell Bomber Wreck… Like the ghost from the past that she is the “Pistoff” wreck lays in about 17m of water.

Some 200m off the beach near Wanigela in Collingwood Bay. About 32km south-west of Tufi and Cape Nelson.

Sediment from the nearby river mouth gives the surrounding water a strong grey-green cast.

The visibility around the wreck is not good…

But the sediment also creates a mist like impression that adds to the overall ethereal atmosphere.

The plane is a B25C Mitchell bomber. Quite why it’s crew of seven christened it with such an unusual name is not recorded. And it will probably never actually be known after all these years.

But, that said, I think we could all make a reasonably accurate guess…

The bomber was one of 12 US aircraft taking part in a coordinated attack on shipping in the Lae area on the 8th of January in 1943 – when five Japanese Zero fighters arrived to defend the naval vessels.

In the ensuing air battle Pistoff’s right engine was hit and badly damaged. But her pilot, 1st Lt. William R Lett, managed to escape from the attacking Japanese Zeros and head south down the coast. 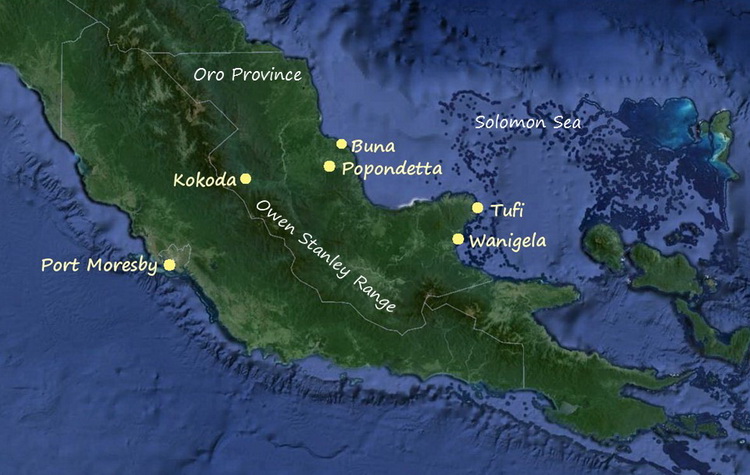 Lett tried to get the plane back to base. But the damaged engine was leaking fuel badly and he was forced to look for a place to land.

The shallower waters of the bay must have looked a much better option than the deep waters and fiords of Cape Nelson.

Lett managed to put Pistoff down safely with only one crew-member slightly injured in the ditching. And local villagers paddled out to help the crew get to the shore.

Pistoff lies on a flat sandy seabed. The plane is remarkably intact apart from the front nose cone with its twin machine guns, and the cockpit canopy, which are both missing.

Both engines of the B25 Mitchell Bomber wreck are still attached to the wings. Albeit with propellers that are badly bent from the crash landing. While the distinctive rear tailfins continue to stand proud. Although both are now heavily encrusted with marine growth.

The best way to dive the wreck is to start at the blunt front end left by the sheared off nose cone. Which is now home to a small school of glassfish that wrap it in a silvery mantle.

The missing cockpit canopy means that the pilot and co-pilots area plus the plane’s controls can be seen clearly.

A little bit further down the top of the fuselage is the rugby ball shaped radio pod that has been colonized by two large clams, a sponge and a small school of fish. While down near the tail is the large rear gun turret complete with it’s twin heavy caliber machine guns.

Neither of the side doors are open. It appears that the crew must have kept them closed to keep the plane afloat for as long as possible after it ditched. Making their exit through the open cockpit canopy.

Because of the low visibility in general area near the river mouth, there is very little chance of spotting the wreck from the surface. But Tufi Dive have the GPS coordinates, which makes locating the plane significantly easier.

All wrecks are interesting and aircraft ones particularly so. But Pistoff and it’s ghostly environment makes for a quite unique experience. So if you get the chance to dive it, take it….

The History of the B25 Mitchell Bomber

The B25 Mitchell Bomber was designed & built by North American Aviation at it’s Kansas City and Inglewood, California factories.

Named after General Billy Mitchell, a pioneer of U.S. military aviation. The B25 was a great success and nearly 10,000 of them were built. With versions of the plane seeing duty in every theater of WWII with most of the Allied air forces. And many planes continuing in service for nearly 40 years.

The B-25 first gained fame as the bomber used in the April 1942 Doolittle Raid on Japan. Which was the first attack on the Japanese islands and just four months after Pearl Harbor. Lead by the legendary Lieutenant Colonel Jimmy Doolittle, sixteen B-25’s were launched from the U.S. Hornet aircraft carrier and successfully bombed Tokyo and four other Japanese cities,

Although only limited damage was done… The raid was a huge morale booster for the U.S. forces and a big surprise for the Japanese. Who had believed that their homeland was completely safe from attack, and were then forced to divert troops for the home defense for the remainder of the war.

Originally designed to bomb from medium altitudes in level flight. The B25 was the first bomber to attack and destroy Japanese ships using a technique developed by the United States 5th Army Air Force called “skip bombing”.

The technique required considerable skill. As it involved the aircraft flying at very low altitudes of around 60m above sea level. At speeds from 200–250 mph to release a “stick” of two to four bombs, with four- to five-second time delay fuses. The release had to be made very close to the target so that the bombs would “skip” over the surface before hitting the target.

The Mitchell Bomber proved to be a very sturdy & reliable aircraft that could withstand tremendous punishment. One well-known B-25C of the 321st Bomb Group was nicknamed “Patches” because its crew chief painted all the aircraft’s flak hole patches with high-visibility zinc chromate paint. By the end of the war, this aircraft had completed over 300 missions, was belly-landed six times and sported over 400-patched holes.

Today, many B-25s are kept in airworthy condition by air museums and collectors.

Tufi scuba diving offers a pretty special combination of options. Ranging from critter hunting in the accumulated flotsam and jetsam around the main …

The offshore reefs of Tufi are one of the main draw-cards for divers considering visiting this remote, but incredibly scenic part, of Papua New …

The B25 Mitchell Bomber Wreck... Like the ghost from the past that she is the "Pistoff" wreck lays in about 17m of water. Some 200m off the beach near …

Diving Tufi Jetty... House reefs are a bit like next door neighbors. Nearly everybody has one but how much time do you really want to spend with …

Tufi WWII PT Boat Wrecks... At the end of 1942, the Allied campaign to defeat the Japanese invasion of PNG was focused on the beachheads of Buna, …

Diving Tufi Fjords... The deep fjords of Cape Nelson are very much the visually defining feature of this area of Papua New Guinea. They are quite unique …

Tufi Dive Resort... It's hard to imagine a more picturesque setting than the one enjoyed by this resort. As they say in the real estate game - location, …

Oro Province, or the Northern Province as it is often referred to, is located on the north coast of PNG’s main island of New Guinea. It has some of Papua …