Port Moresby 101… The capital city of Papua New Guinea and the principal international gateway in to the country. Port Moresby is located on a quite spectacular headland that faces out in to Gulf of Papua.

POM, as it is often described locally, is the largest city in the South Pacific with a population of around 350,000. The city has what you might call an image problem… With a firmly entrenched reputation as a violent and dangerous place. Where the streets are not safe to walk on, and venturing out on them is basically taking your life in your hands…

While it is true that Moresby can be dangerous and I have to say that it is not my favorite place… My overall experience is that it is far from being the hell-hole that the tabloid media love to paint it. And a modicum of common sense will keep you safe and sound!

So, if you are looking at a trip to Papua New Guinea. The bottom line is that you should not let the poor reputation of Port Moresby stop you from going!

The country has a tremendous amount to offer, both above and below the water. And an overnight stay in the capital is not the near-death experience it might appear to be.

In reality there are actually two Port Moresby’s… The downtown and beach side suburbs where expats and rich locals live, which is also where most of the main hotels are.

Here the average three-bedroom house costs in excess of $750,000 and rents for a two bedroom apartment can easily exceed $2500 per week. Expensive by any standards, but totally out of the question for ordinary locals where the average weekly salary is less than $200.

These are areas where violent crime is always a possibility. But actually only occurs occasionally and usually with severe (ex-judicial) retribution by the police when the perpetrators are caught.

Then there is the other Port Moresby, where the locals live. And nowhere is the inequality between the minority who have, and the majority who do not, better illustrated than the side-by-side suburbs of Ela Beach and Koki.

Ela Beach is pictured above and is now a very desirable part of Port Moresby. While just over 1km down the road is Koki, one of only two remaining stilt villages.

Then there are the squatter camps where violent crime, particularly against females, is often systematic and very much a part of daily life. The situation is at its very worse in the camps like Six Mile that occupy the edges of Port Moresby.

These squatter camps are basically the only housing option for the many people who have migrated to the capital. Some find employment, but most don’t in a city where formal unemployment is said to be at least 60%.

The violence emanates principally from the Raskols, or crime gangs. These have become a permanent and very negative feature of Port Moresby. And some other major towns such as Mount Hagen & Lae.

The Raskol phenomena started in the early 1960’s, with disenchanted youths unable to find meaningful employment in Moresby. They gained increasing notoriety in the 1970’s. As more and more people moved there looking for work as the country approached independence in 1975.

If you are interested in learning more about how the Raskol gangs originally formed and then grew over time. Here is a link to a good paper called Rascals in Parasdise by Nand Nibbrig for Pacific Studies, which  provides some very good background information.

For a visitor to Port Moresby, probably the most worrisome aspect is a random encounter with Raskols.

However, unless you are particularly careless and like to walk around unaccompanied.

Or maybe with an expensive looking camera, wrist watch and a visibly bulging wallet…

Then the chances of such an encounter happening are actually quite slim.

Very few crimes against expats in Port Moresby are actually planned. Rather they tend to be random and opportunistic occurrences. Where a Raskol seizes the chance that has suddenly presented itself.

How to Spot a Raskol?

Local people in PNG tend to sit on the ground and watch the world go when they have nothing to do. Which to the uninitiated visitor who is already semi-paranoid about raskols just waiting to pounce, can be very intimidating!

While it is unlikely that they will be wearing a T Shirt with “Raskol” on the front to identify themselves. The fact is that you will probably know one should you cross paths with one.

So the trick is to use your common sense and get out and see the things Port Moresby has to offer. But use the guided tours offered by all the hotels to do that. As they will know the potential trouble spots, who the possible trouble makers are and steer you well clear. 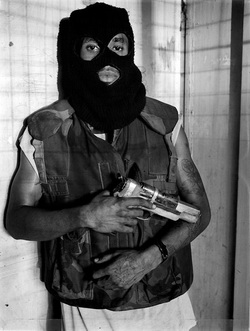 Just in case you are wondering what a Raskol actually does looks like. Check out Australian photographer Stephen Dupont’s image gallery.

Dupont is quite a guy – he specializes in what he calls fragile cultures and marginalized peoples.

Back in 2004 he managed to get connected with the “Kips Kaboni” (Red Devils) Raskol community and  Papua New Guinea’s oldest gang.

Over time he was allowed to spend time in their midst and document the individuals in the gang.

Apparently it took him several trips to Port Moresby to build the trust needed, but eventually he was able to set up a makeshift studio in their squatter camp in which to photograph his subjects.

Back To: The Complete Guide to Diving Port Moresby