Kimbe Bay Seamounts… These three sites are the most exciting, exhilarating and, from time to time, challenging dives in Kimbe Bay.

Bradford Shoals, Inglis Shoals and Joel’s are located in the deepest areas of the bay, close to the open waters of the Bismarck Sea.

And all three are vibrant, self-contained, ecosystems that act as beacons to the larger, roaming creatures of the sea.

Because of where they are, good weather is required to dive them. Plus they are more subject to currents than the Kimbe Bay reefs.

But if the stars align and you can dive the seamounts – don’t hesitate! 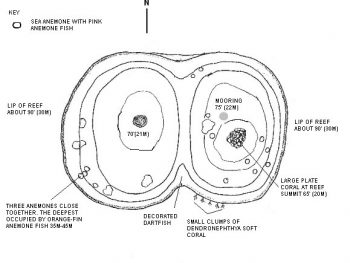 Because of its location near the mouth of the bay and the 2000m deep water all around it. Bradford Shoals is considered by many to be the signature dive of Kimbe Bay. As it has the best chance to encounter large pelagics and marine mammals entering from the Bismarck Sea to the north

Its twin summits, where you start the dive, are at a depth of some 20m… And both summits and their flanks are richly coated in flat plates of hard corals.

Those plate formations are a nature’s way of adapting hard corals so it can grow at depth. With the larger surface area maximizing the value of the reduced sunlight at depth.

Surrounded by deep blue water and quite distant from the nearest reef structure, Bradford acts as a magnet for big fish and pelagics.

No guarantees of course… but on almost any given day you are almost certain to see large schools of barracuda, big-eye trevally, dog tooth tuna, unicorn fish and fusiliers.

Plus skittish white-tip reef sharks, cruising gray reef sharks out in the current.

And… the chance to see a great hammerhead on an occasional foray up from the deep.

Schooling barracuda are a permanent feature of all three Kimbe seamounts. But at Bradford Shoals the sheer size of the school and their acceptance of divers, makes the whole experience really quite exceptional! 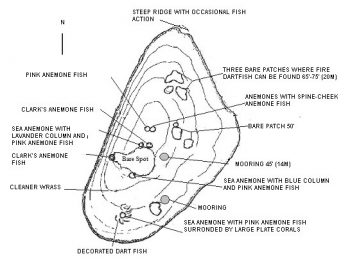 Inglis is an easier dive than Bradford Shoals because the top of the seamount is shallower at 14m.

Plus all the action is concentrated around that peak and its sloping sides, which drop down quite rapidly to about 25m.

Where a narrow lip runs around the seamount, before sheering vertically down into the depths of the bay.

There is much to see in and around the sides of the seamount.

But at its best, it will be the area around the crest of Inglis that will ingrain itself in to your long-term memory!

Circling in the open water will be the main tenants of the shoal – the resident school of barracuda.

With numerous anemone fish, beautiful sea fans and friendly bat fish, while the occasional passing dogtooth tuna or bigeye trevally will add to the overall excitement. 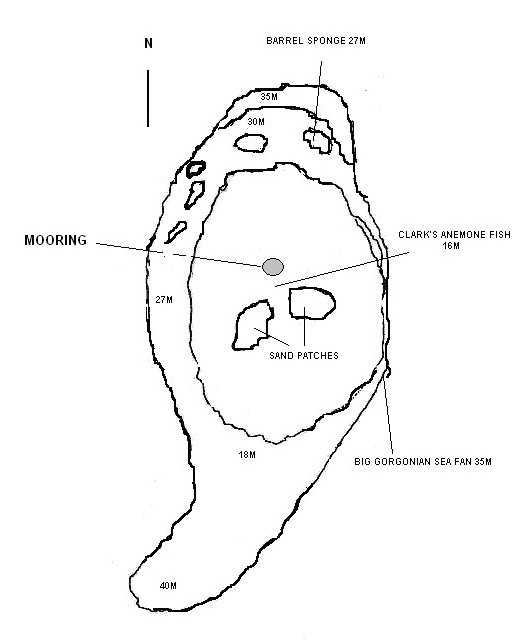 Joel’s rises up from the deep waters on the western side of Kimbe Bay and is relatively close to Inglis Shoals.

The top of its pinnacle is in 16m and the accessible overall area that can be dived is relatively small.

So it is possible to swim right around Joel’s and there are many things to see as you do that.

The southern side of Joel’s slopes down gradually to a depth of around 40m. While the rest of the seamount quickly tapers down to about 35m.

From 40m the sides of the seamount plunge almost vertically down into the depths of Kimbe Bay! Joel’s has also has a large resident school of barracuda which patrol the site and are quite used to divers.

Exploration of the top of the seamount is best saved to the end of the dive, after the circumnavigation… And, again there is much to see including three different types of anemone fish near the permanent mooring.

But, be very careful on the top as there is a large area covered with stinging Corallimorphariam!