ONEUW One160X Strobe Review… This is a first impressions review of my personal experience with this new Italian strobe. As explained below, I bought the strobes myself through my diving buddy and fellow underwater photographer Filippo Borghi. And the purpose of this review is to share my initial experience with some new and really excellent technology.

It’s no secret that Italians are, by nature, passionate and enthusiastic people… So when the first message arrived from my great friend Filippo Borghi extolling the virtues of the new strobes he had been testing – quite frankly I took it all with a pinch of salt!

But the messages kept on coming! So, I tried putting it all down to the fact that these new strobes were made in Italy and Filippo was just being patriotic. Still the messages kept on coming.  And it seemed that we simply MUST buy a pair each for our upcoming trip to South Australia to photograph the Leafy Seadragons and Giant Australian Cuttlefish!

The last thing I needed at that point in time was more strobes for my already considerable collection. But Filippo prevailed and before I could say Ciao I was sending him a not insignificant amount of money. Fast forward to the 1st of June and Adelaide airport as we meet up to start our epic road trip around South Australia. And I am reassured as Filippo assures me that the “babies” are safe and sound in his suitcase!

It is very clear when you first see the ONE160x strobes that they certainly appear to have been very well made. Everything about them looks really good.

My background is mechanical engineering, so well-made stuff automatically catches my attention. But I have to say that all the things I had “invested” in through Filippo really did look great when I inspected the babies for the first time! 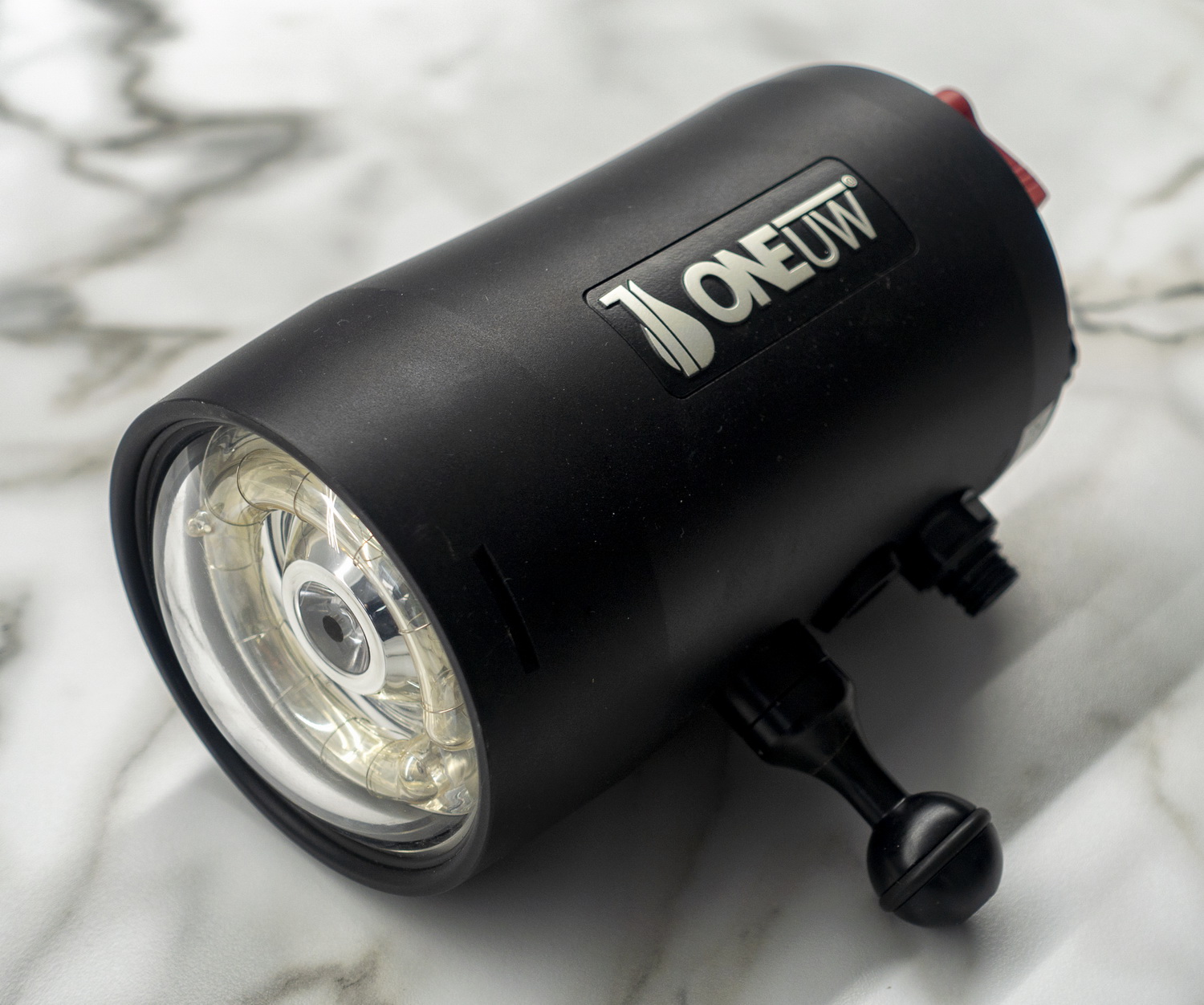 The attention to detail apparent in the design, manufacturing and delivery of what I had bought was very impressive. From the neoprene covers on the strobes themselves, not to mention the ones for the dome elements and those for the batteries. The additional O rings on the special strobe cables. The locking mechanism on the battery cover to the actual black finish on the strobes themselves, it all said quality.

But I have to say that as good as it all looked, memories of my youth in the UK and that wonderful Alfa Romeo that I was so proud of many years ago disturbed my sleep patterns the first night in South Australia… Like my new strobes, that Alfa was the most incredible piece of engineering I had ever owned. But man… it nearly bankrupted me trying to keep it on the road!

I used my new strobes every day for the next 15 days as we explored the wonderful jetties of South Australia. And then immersed ourselves in the incredible spectacle that is the annual aggregation of Giant Australian Cuttlefish at Whyalla. Here is what I took away from that experience: 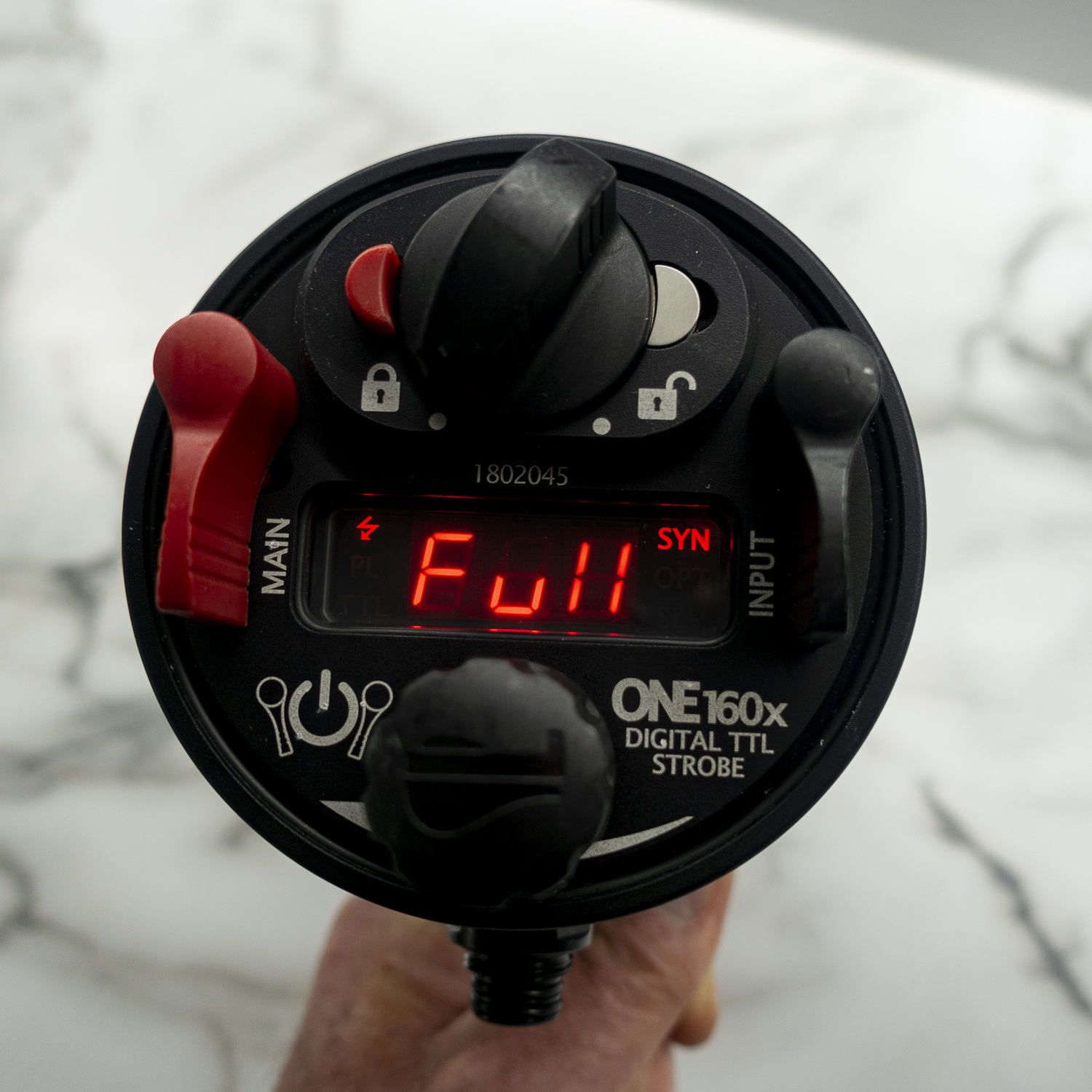 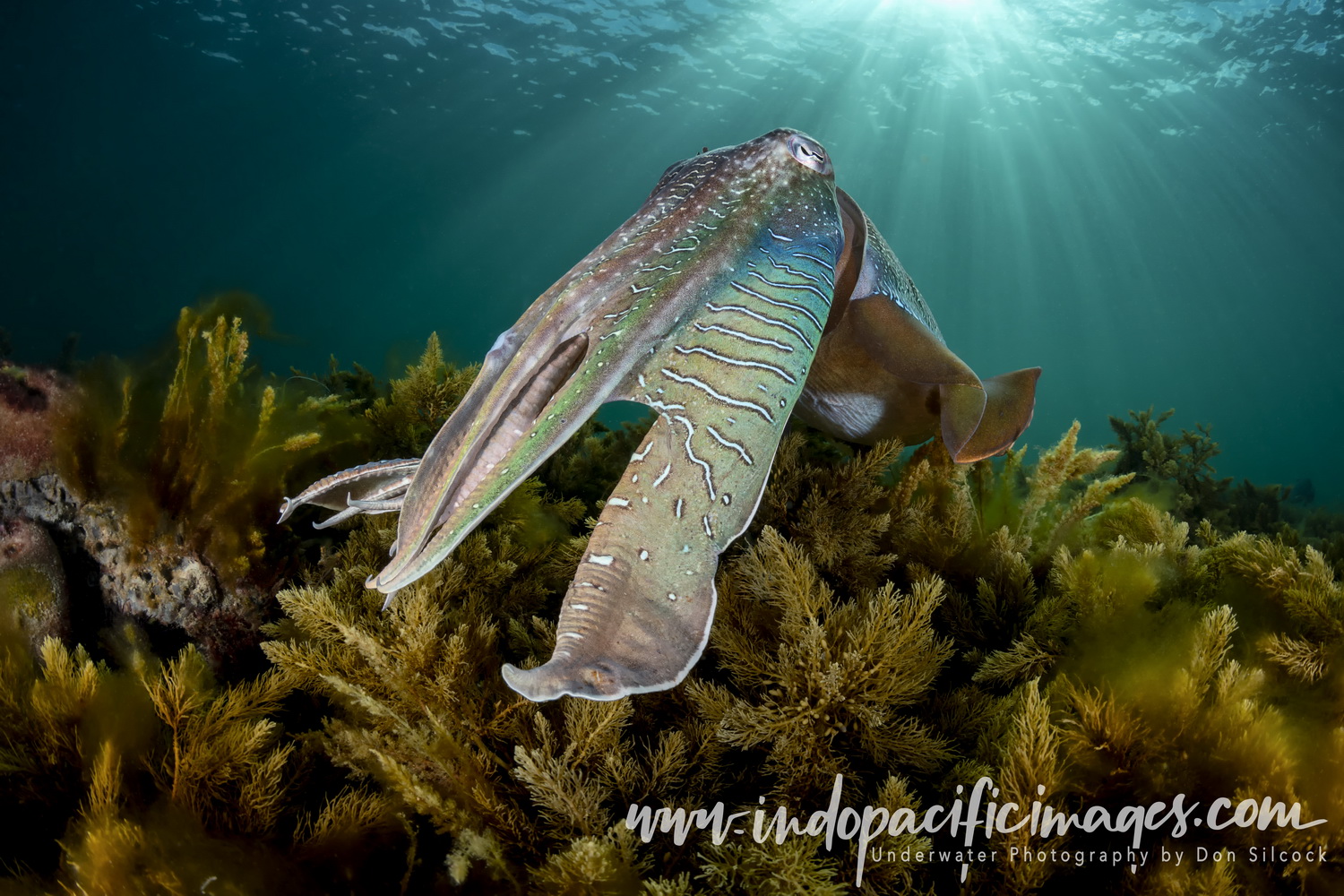 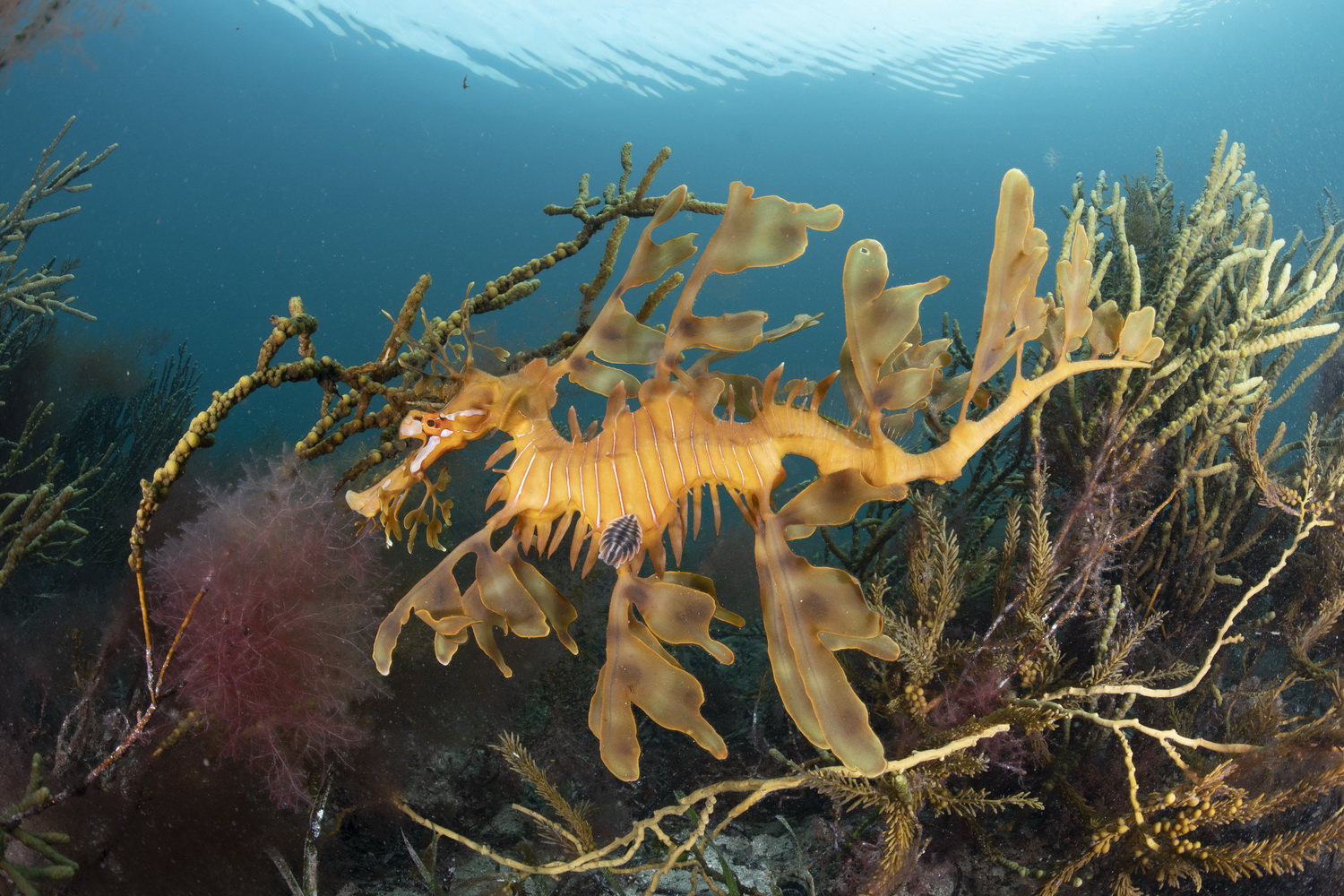 I found this quite amazing as I was using the same technique I always use. With strobes well back behind the housing handles and angled out slightly. Again, I am not privy to the physics but I believe that the domed front element plays a major role in this. Shown below is a 100% crop of the top left corner of the unprocessed JPEG and the lack of backscatter! 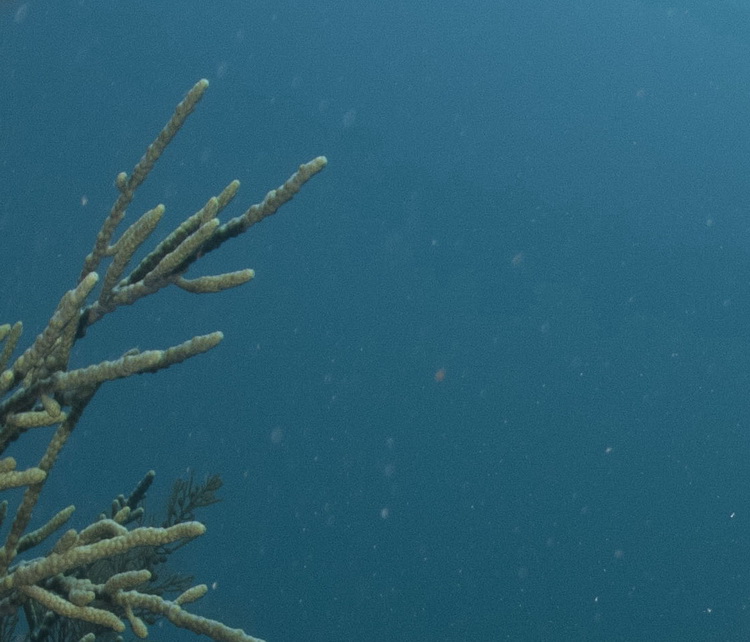 With the two new One160x strobes I am now the owner of 16 strobes! Yes, I know… but I have a reasonable excuse as I live in two places (Sydney and Bali – it’s not as grand as it might sound) so I have gravitated to having sets of gear in both places.

For general wide-angle and travel I use Ikelite DS160 strobes. And for “big animal” photography I use Sea & Sea YS250 strobes. While for macro I use Inon strobes. None are perfect, but my benchmark for overall power, beam coverage, recycle time, reliability and durability has been the YS250’s. And I have four of the monsters – two in Sydney and two in Bali.

The really great thing about the YS250’s is the way they can illuminate big animal subjects (albeit at about ¼ to ⅓ power) at the 10 fps capability of my Nikon D500. I appreciate that you probably don’t need that capability so often. But when you do – you really need it! The BIG question in my mind once I got back from South Australia was could the One160x strobes replace my YS250’s and DS160’s?

Physically they are a bit smaller and lighter than the Ikelites and seem like miniatures compared to the YS250’s! So, I decided to test the One160x against the YS250’s…

Here is how I did my testing:

Obviously not an exact correlation on the strobe power settings. But I typically use ¼ power with the YS250’s and big animals and I get very reliable exposures at 10FPS. However, I have never actually tested the performance before. What I found when I did test was that at ¼ to ½ power setting the YS250’s were able to recycle and fire consistently for the full 10 frames. See below… 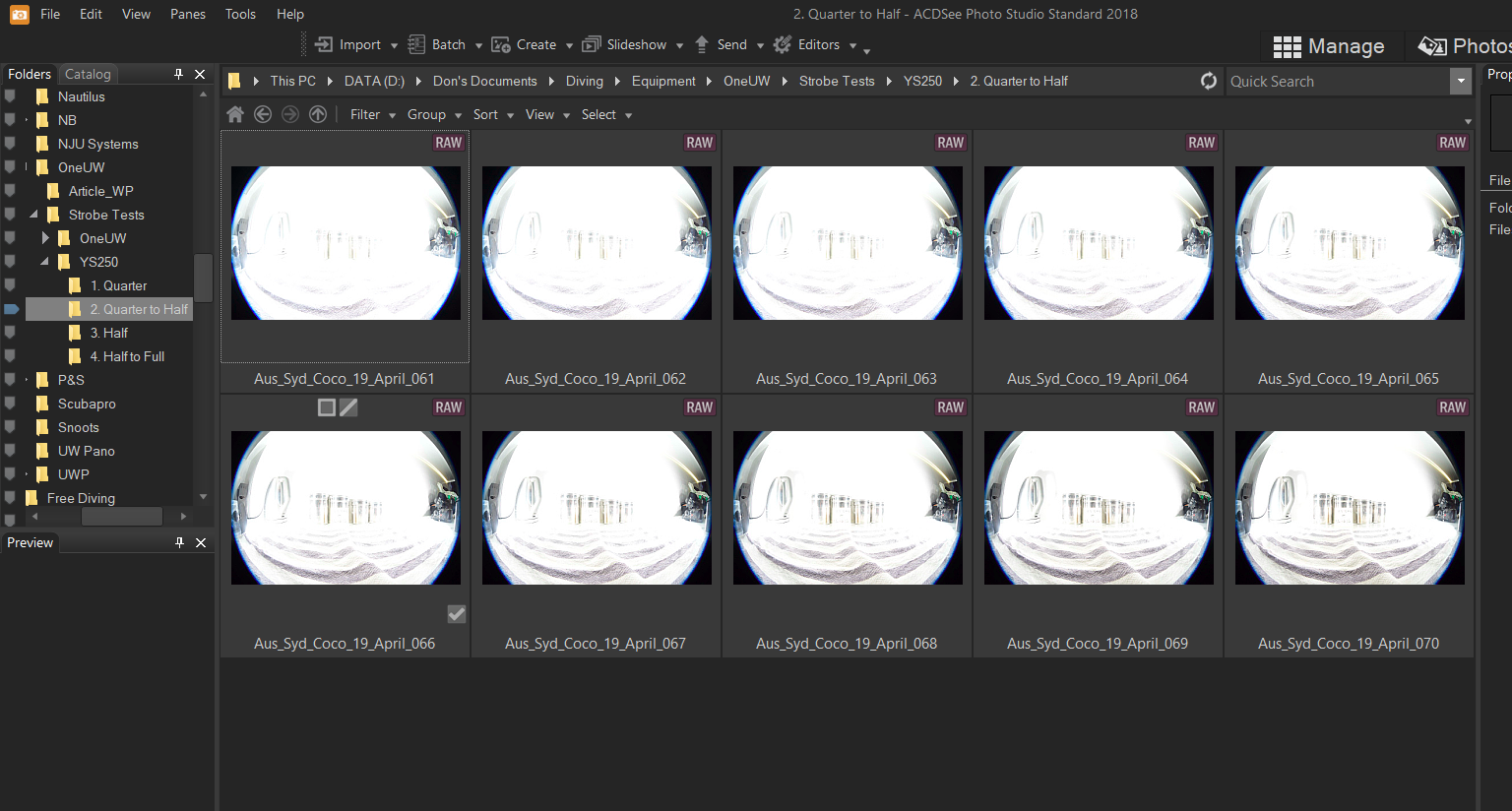 At ½ power on the YS250’s they were able to recycle and fire consistently for the first 8 frames. Then there was a slight reduction in power on the last two frames – see below… 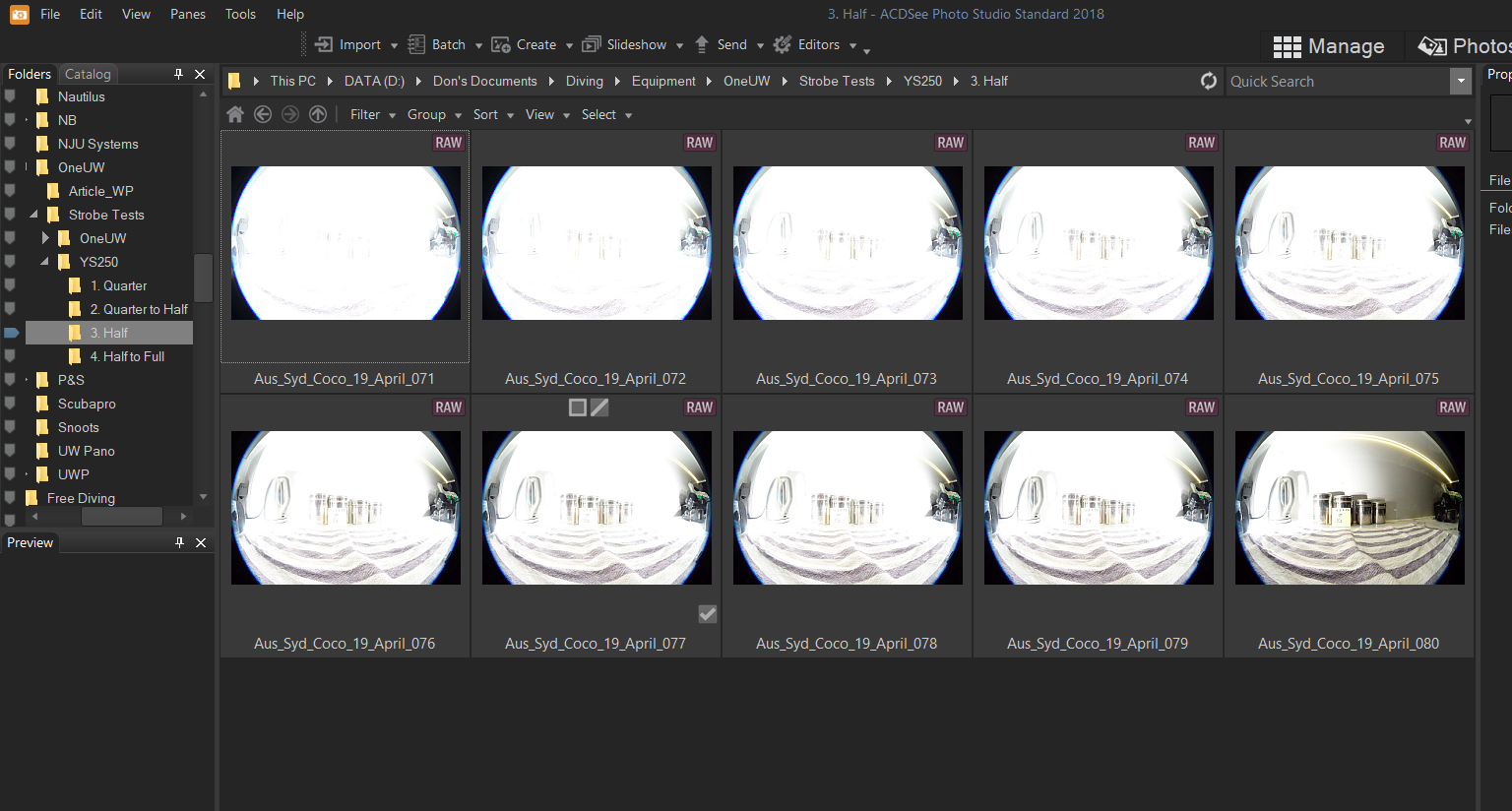 At ½ to Full (¾) power every third exposure was dark with the YS 250’s unable to recycle in time, so two out of three frames were good and the third was not. 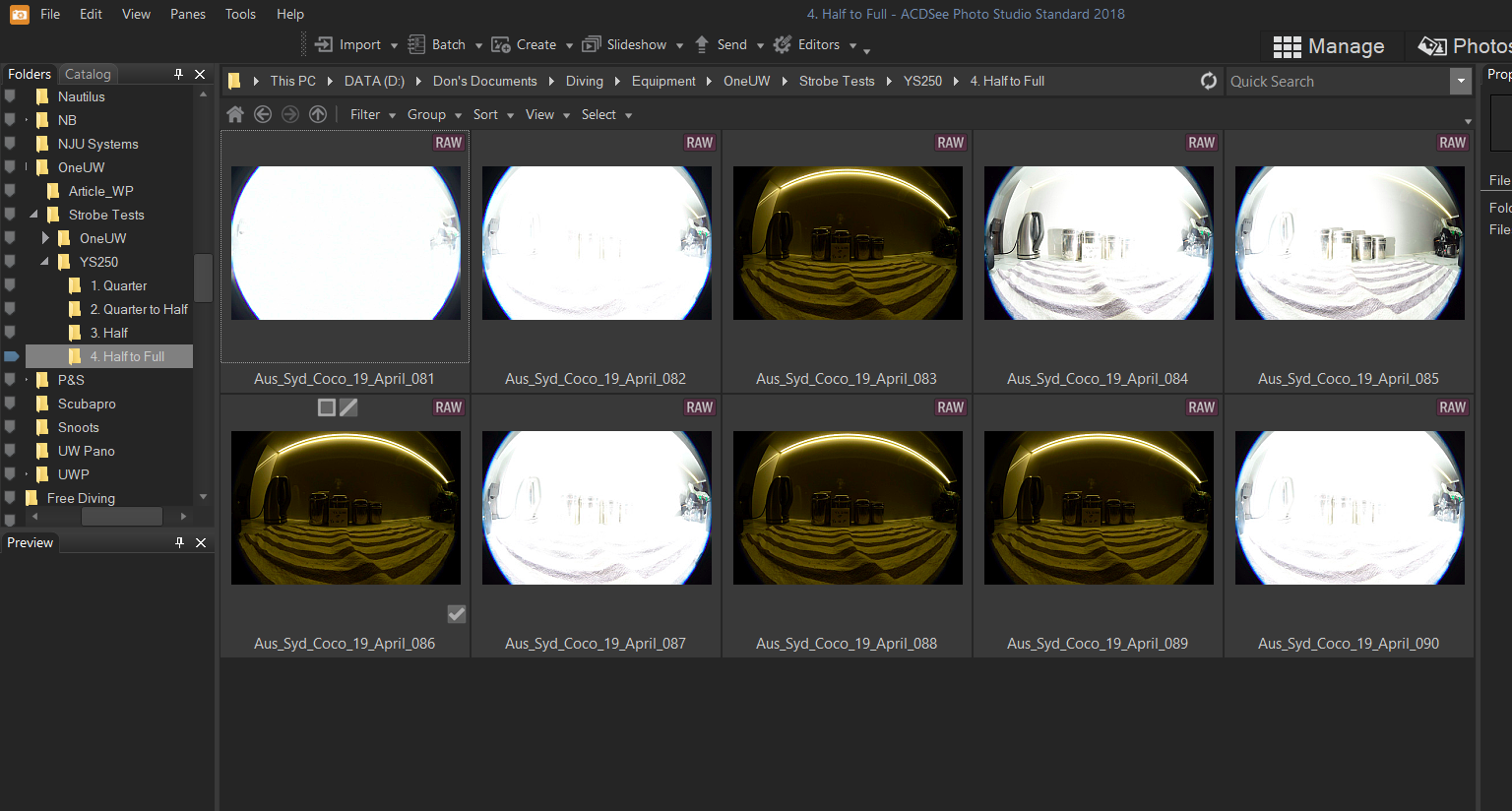 On the One160x strobes, they were able to recycle and fire consistently at 10 FPS until I got to the -3 stop setting. See below @ -4 stops… 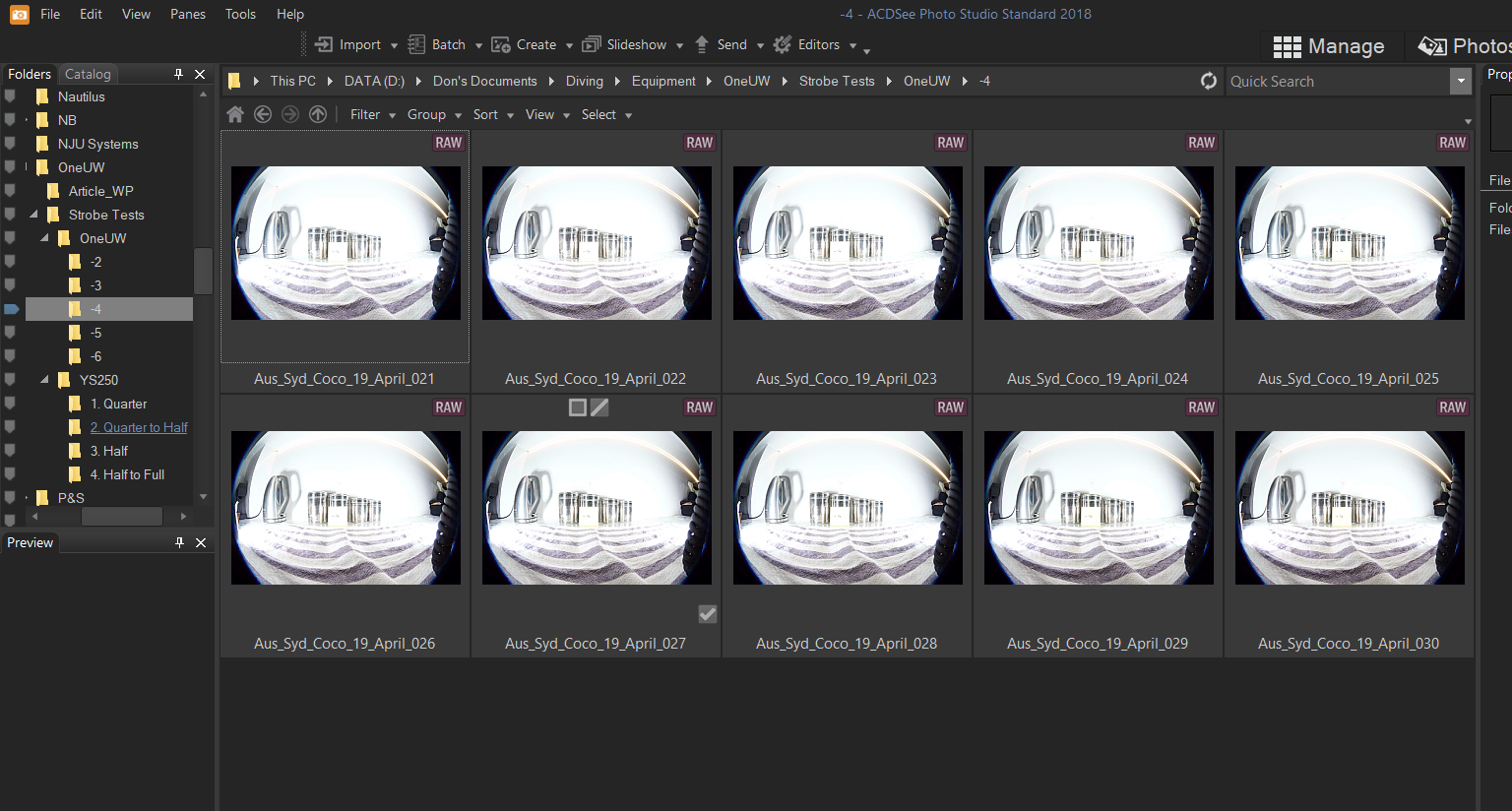 The -3 stops setting is half power in my calculations and the first 5 frames fired consistently. Then frames 6 and 7 showed a slight reduction in exposure. Frame 8 did not recycle and frames 9 and 10 were almost back to firing consistently. See below… 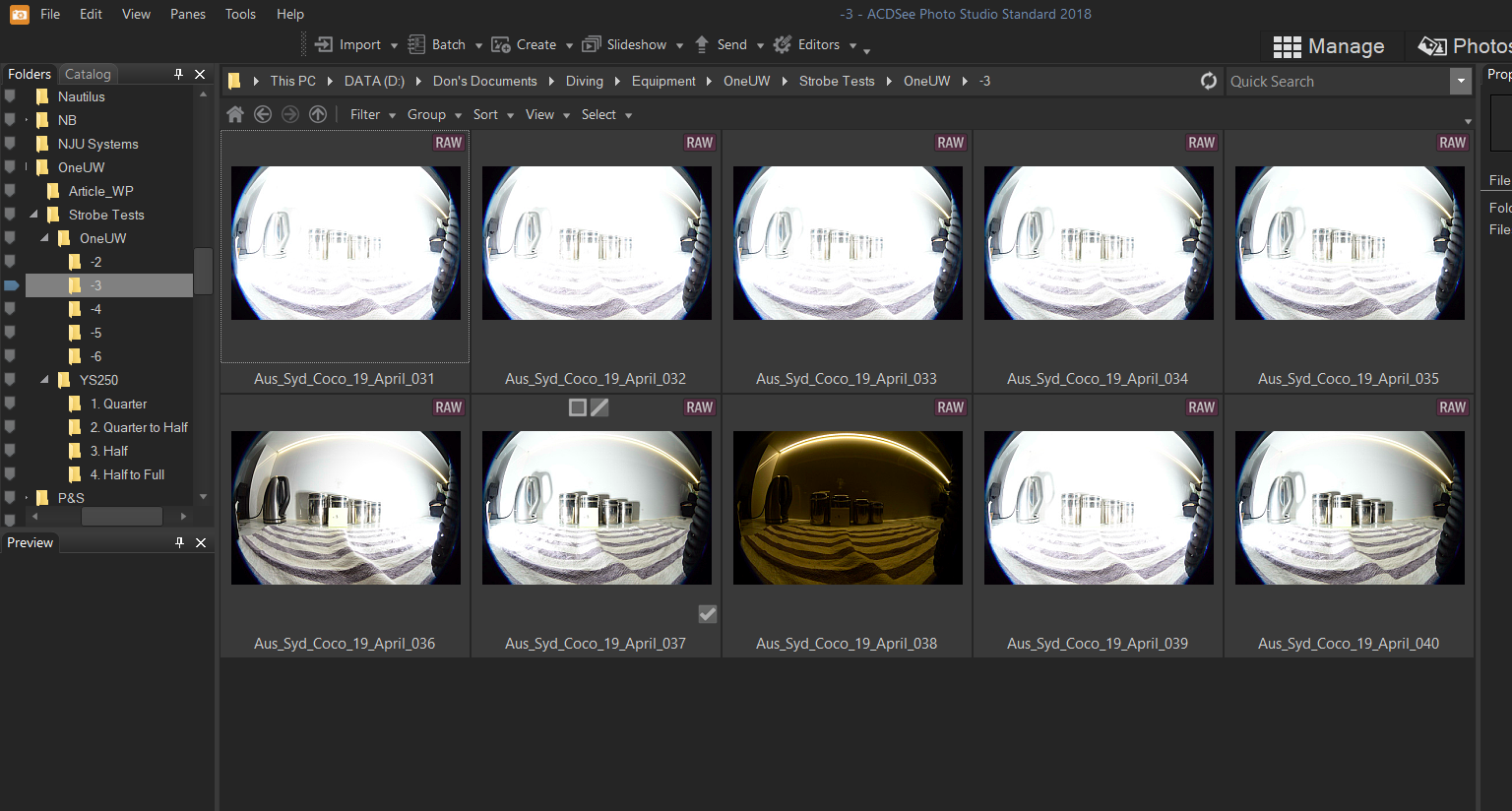 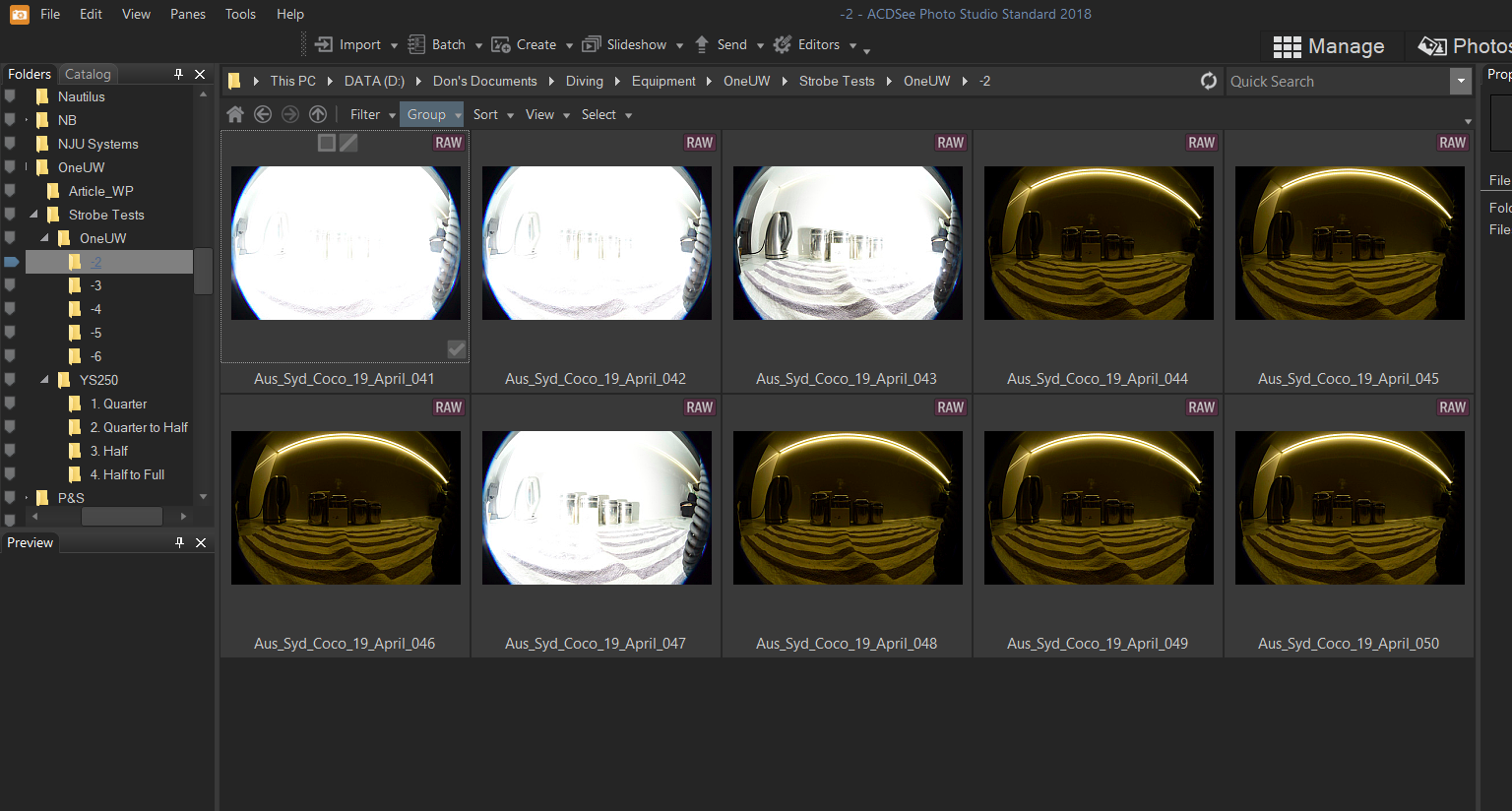 So… the way it looks to me are that the YS 250’s just begin to falter at ½ power, but are very consistent below that. While the One160x’s are also very consistent up to their half power settings. And then also start to falter but more so than the YS250’s.

Which effectively indicates that both strobes are reasonably equal in overall power. Both able to keep up with high frame rates when kept at a ¼ or even ⅓ setting.

The overall experience with the One160x strobes was a revelation to me! And I have to say it… Filippo was 100% correct!! The ONEUW One160X strobe is an incredible device. One that opens up all sorts of creative opportunities that I simply did not have before.

Several other European strobes are firmly positioned at the top end of the market. I have no personal experience of any of them. So I cannot offer an opinion apart from the fact that I have always choked at the last minute when looking to buy them…

So, what am I going to do? Well, I am going to keep a pair of YS250’s and a couple of Inon’s. Then sell the rest and spend the proceeds on a second pair of One160x’s.

Why? Well as the saying goes, don’t spend your money on a new camera – buy better water to dive in. I am going one step further and I am going to buy buying better light!

Back To: Equipment Reviews Main Page

D500 for Underwater Photography
Next Post: Milne Bay – Where It All Began 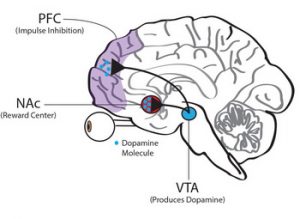 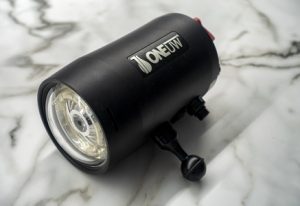 ONEUW One160X Strobe Review... This is a first impressions review of my personal experience with this new Italian strobe. As explained … 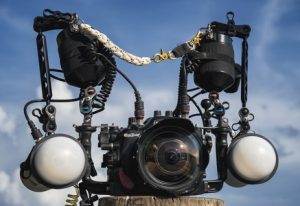 Nikon D500 for Underwater Photography - A Mid-Term Review... How time flies - just over two years ago I wrote a first impressions review of … 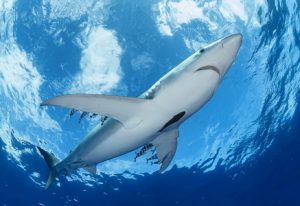 The Nikon D500 Underwater... Why Nikon never released a D400 follow-up to the successful D300 “prosumer” DSLR will probably never be known. …