Where to Dive in East Timor… On the 20th May 2002, a new country was born to the north of Australia. It was a very painful experience for its people, one they had fought long and hard for. Earning the respect of even those who had opposed its separation from Indonesia.

The country, Timor Leste, emerged from centuries of foreign rule – 455 years as a colony of Portugal. And then 24 years under Indonesia after it was “annexed” by its much larger neighbor.

In what is a long and sorry tale of colonial exploitation, followed by brutal Cold War “realpolitik”. Timor Leste arrived in the world in a pretty sorry state. With the land stripped of its rich and highly prized sandalwood and its infrastructure destroyed by the departing Indonesians.

But it was free and independent at last… and in the 18 years since then, Timor Leste has done its best to moved forward and start to realize its full potential. With scuba diving seen as a key component of a sustainable tourism industry the country wants so much to develop!

Where to Dive in East Timor – What’s Special?

A quick look at the map, combined with a basic understanding of the phenomenal force of nature that marine scientists call the Indonesian Throughflow. Is enough to tell you that the northern coast of Timor Leste holds considerable promise!

To the north of Timor Leste are Alor and Wetar. The most easterly of the chain of islands called the Lesser Sundas. which form the southern boundary of the huge Indonesian archipelago. 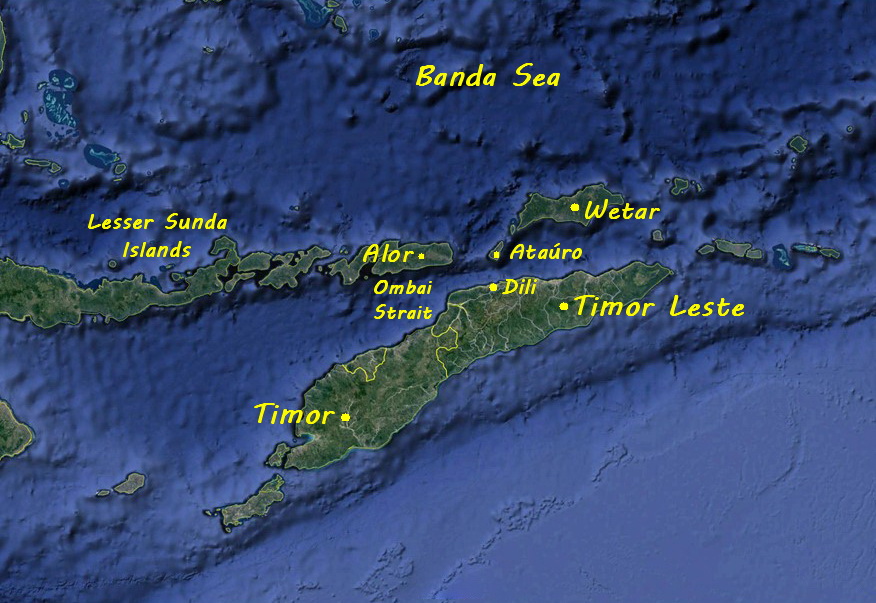 Further north still are the deep basins of the Banda Sea, layered with the rich  phosphorus & nitrogen laden detritus of the sea. And, as the mighty Throughflow surges south towards the shallower waters of the Lesser Sundas, it creates upwellings that suck up those nutrients from the depths below.

Between Alor, Wetar and Timor Leste is the Ombai Strait, one of the three main passages through the Lesser Sunda islands and those nutritive-dense waters create and sustain the incredible biodiversity of that area.

Where to Dive in East Timor – Main Locations

Timor Leste’s diving locations can be broken down into three main areas, consisting of those in and around the capital Dili, the coastal locations up to 2 hours’ drive to the east and west of Dili and the large island of Atauro to the north of Dili.

There are three sites that are dived regularly in Dili – the Pertamina Jetty near the center of the city, Tasi Tolu on the western outskirts and nearby Dili Rock.

All are shore dives and both Pertamina Jetty and Tasi Tolu are muck/critter sites. While Dili Rock is a mixture of critters and coral gardens.

Tasi Tolu takes its name from the three fresh water lakes below the nearby foothills. And is a flat patch of marine growth in about 15m of water just off the beach.

It would be very easy to miss, or simply ignore, that patch if you were not guided. Which would mean missing out on the wide variety of resident photogenic critters!

Dili Rock on the other hand is a much prettier site. Its coral gardens are a delight to photograph, but you won’t find exotic critters there…

While Pertamina Jetty is the wreck dive you do when there isn’t an actual wreck… As the name suggests it is the jetty used to import fuels and refined products from the Indonesian national oil company Pertamina.

It can only be dived when there are no tankers moored there. But it’s an interesting dive and has a lot to see and photograph.

There are numerous dives sites heading east from Dili. All of which are shore dives reached by short paths from the main road. And involve getting kitted up under whatever shade is available and then walking down the beach.

All the sites have sheltered entries, so actually getting in to the water is easy and exposure to the strong currents of the Ombai Strait is gradual and manageable.

My personal favorites to the east of Dili were Secret Garden, Marble Rock and Dirt Track. With Secret Garden standing out because its small, but superb, sponge garden . Together with its resident colonies of photogenic purple anthias and silvery glass fish.

There are two main dive site areas to the west of Dili – Bubble Beach and the picturesque town of Maubara.

Bubble Beach is reputed to be one of the best dives in Timor Leste, but unfortunately access from the shore is not possible anymore as the area had been fenced off because the “bubbles” are believed to be natural gas leaking up from the deep water gas reserves that hold the key to Timor Leste’s future prosperity.

There are two sites at Maubara – the Church and the Fort. With the former offering some superb diving around the numerous bommies on the sloping coral slope. First impressions should be ignored though, because the shallower parts of the slope are not particularly appealing.

But as you go deeper at around 15m they come to life. Positively abounding with marine life that is nourished by the strong currents that sweep the site.

My favorite bommie was about 200m to the north-west of the main entry point straight down from the car parking area near the church. It is at around 19m in depth and was simply teeming with life.

The large and visibly stunning island of Ataúro lays 30 km due north of Dili and suits right in the path of the Indonesian Throughflow as it flows into the Ombai Strait.

The area has a reputation as a “marine mammal superhighway” because of the regular sightings of pelagics, dolphins and numerous whales including the mighty blue whale and the incredible sperm whale!

While the sightings are very real, encounters with those creatures are unlikely near the island while on scuba… A dedicated trip with a fast boat to get in position ahead of the migrating animals would be needed and the encounters would be on snorkel at, or near the surface – something I am hoping to do later this year…

Ataúro suffers from a lack of rainfall, which means that life is hard for the permanent residents of the island and development is significantly slower than on the mainland. But the lack of run-off from the island means that the visibility around Ataúro is exceptional.

The diving at Ataúro is concentrated along the west and east coasts of the island, with the west’s defining feature being its dramatic steep walls that descend in to the depths of the Ombai Strait. While the east coast is more scenic, fringing reefs that slope down gently.

Where to Dive in East Timor – What’s in a Name?

Timor Leste, East Timor or Timór Lorosa’e… Geographically the country is located in the eastern half of the island of Timor – the western half is very much part of Indonesia.

Officially the country is Timor Leste – a name derived from timur, the word for “east” in Bahasa Indonesia, while in Portuguese Leste is also “east”, so Timor Leste means “East East”

Where to Dive in East Timor – In Summary…

As divers we tend to be constantly looking for new and exciting places to try. And Timor Leste offers an interesting mix of things to see both above and below the water.

Very much in the mode of a developing country, Timor Leste’s rough edges add to its charm. And the sheer determination of its people to overcome the country’s colonial past and the brutal years of the Indonesian occupation are simply admirable.

If you do decide to go, do yourself a favour and allow some extra time to do some land-based exploring. Enjoy the country as it is now because it won’t stay like that forever!

Diving Timor Leste - also known as East Timor... and whatever you call it this is a quite special country. One that suffered so much to gain independence …

Scuba Diving in Timor Leste... There really is some excellent diving to be had in Timor Leste! With sites ranging from beautiful bommies and coral …

The Complete Guide to diving Atauro Island in Timor Leste. The island of Atauro is located just off the coast, to the north of Timor Leste's capital …

Timor Leste - Dive Sites East of Dili... As you head east out of Dili, along the scenic coast road towards the town of Manatuto, you will pass numerous …

Timor Leste – Dive Sites West of Dili... The coast road westwards from Dili takes you to the small town of Maubara. Which hosts the two main dive …

Dili Dive Sites... There are three local sites in Timor Leste's capital city that are dived quite regularly. All three are quite different and offer …

Timor Leste Overview and History... First colonized by the Portuguese around 1520, the country is officially known as Timor Leste. But more …