Diving Milne Bay in PNG… This large bay on the eastern tip of the Papua New Guinea’s “mainland” is what first brought the country to the attention of travelling divers and underwater photographers around the world.

The first articles and images started to appear in the mid-1980’s. Still the very early days of liveaboards in exotic locations that few people had actually heard of…

And yet here was this British ex-schoolteacher on board a locally built, custom dive vessel exploring a place called Milne Bay in a country named PNG.

His name was Bob Halstead. And together with his then wife Dinah, they established the first liveaboard operation in Papua New Guinea.

Their boat, the MV Telita was shall we say compact… But it enabled them to get to and dive the many reefs and islands that form Milne Bay.

Bob, who passed away in December 2018, was always forthright in his opinions. And seemed to relish being controversial… Or as someone once described him “not always right, but never in doubt”.

But there was absolutely no doubt that he could take great underwater photos and captured superb images of the sites he and Dinah found in Milne Bay. Using them to illustrate the numerous articles published in the global diving media. Effectively establishing Milne Bay as a “must-do” dive location.

Other adventurers followed Halstead… Most notably Rob van der Loos with his boat MV Chertan. And the rest, as they say, is history!

So… Why is Milne Bay Special?

Papua New Guinea is one of the six countries that form the Coral Triangle. The region of the Indo-Pacific widely acknowledged as the richest known area of marine biodiversity in the world.

Studies of the Coral Triangle’s marine biodiversity have categorised more than 600 species of coral, together with 3000 species of reef fish. To to put those numbers into perspective… The Red Sea has around 200 coral species and 1000 fish species while the Caribbean has 50 and 900!

The lifeforce of that intense biodiversity are the nutrient rich, but incredible complex, regional and equatorial currents that nourish and sustain it all and also distribute the resultant eggs and larvae.

Of those six countries, only PNG is touched by all of the main currents, because of its location on the epicentre of the Coral Triangle. And Milne Bay is effectively the very eye of that incredible storm of biodiversity. That’s why it’s special!

There are actually two Milne Bays… The first is the large, sheltered bay on the south-eastern tip of New Guinea island, named after the British Admiral Sir Alexander Milne. And then there is the much larger province of Milne Bay.

Milne Bay Province is roughly the size of New Zealand. But only about 5% of that area is dry land, and the rest are the waters surrounding the 600+ islands that make up the province.

With those islands falling in to four main groups: The Trobriands, the D’Entrecasteaux Islands, Woodlark Island and the Louisiade Archipelago.

Apart from the occasional exploratory trip, diving is largely concentrated in and around Milne Bay itself. Which is still a really large area and is best thought of as the northern section, consisting of the Solomon Sea side of the East Cape peninsula together with the islands and seamounts around Nuakata Island.

Then there is the southern part, with the area centred around Milne Bay’s former administrative capital of Samarai Island.

On the northern (Solomon Sea) side of the long and narrow East Cape peninsula are numerous small bays. The headlands of which project out into the nutrient-dense current flows of the north coast.

Those rich nutrients, together with the eggs and larvae carried with the currents, have created beautiful coral gardens on the sloping terraces. Which descend into the depths of the Goschen Strait between the East Cape and Normanby Island.

They are effectively self-contained ecosystems that host the myriad of marine life the Coral Triangle is renowned for and are a joy to dive. There are several to choose from, but my favourite is Deacon’s Reef. Which is named after Sydney underwater photographer and diving pioneer Kevin Deacon.

Deacon’s is an absolute gem of a dive. It never ceases to amaze me with both its intense richness and the random pelagic encounters that can happen there.

The Goschen Strait and the north-east coast of New Guinea island is somewhat of a pelagic super-highway. And you literally never know what chance encounters may happen and all the headland sites are known for the chance of a random encounter!

The Home of Muck Diving…

The other incredible thing about Deacon’s Reef is that the bay, where its headland is located, is the place where “muck diving” was born – Dinah’s Beach. Dinah Halstead’s home is the village of Lauadi. And she convinced Bob to try diving the beach area in front of it.

Much to his surprise he discovered all the critters in the black sand. Bob’s images of these strange and exotic creatures were captivating as many had never really been photographed before.

He came up with the term muck diving trying to convince a party of well-heeled American divers and underwater photographers to forego the beautiful reefs and try the black sand. In turn they thought Bob was just trying to save on fuel… But they gave it a try and the rest is also history!

Let’s start with the 20% and my favourite dive in the south – Gona Bara Bara island. Home to a wonderful reef manta cleaning station called Giants@Home. Which is the most reliable place in PNG to see these beautiful creatures. The site is in about 9m of water, just off the beach at Gona Bara Bara, and consists of a solitary bommie in an otherwise featureless sandy area. The bommie is about 5m high and is home to lots of cleaner wrasse that service the mantas when they are ready to be cleaned of parasites.

Cleaning stations are a kind of marine version of a demilitarized zone… Where the normal rules of the reef (winner takes all…) are suspended under a process marine biologists call mutualism. It’s a fascinating and intriguing ritual to observe as the mantas hover above the bommie and the cleaner wrasse service them!

Gona Bara Bara also has some good critter sites, but the very best of that 80% is without doubt Samarai Island jetty!

Samarai was selected by the British in 1888 as the administrative capital of the province. Because it is strategically located near the southern end of the China Strait. The important channel that is used to enter Milne Bay by sea.

And by 1900 the island had become a bustling and attractive cosmopolitan port town and major commercial centre. But unfortunately, those glory days are long behind it. As the town has fallen into disrepair and nowhere is that more evident than the large jetty, much of which is basically crumbling…

But underneath that decaying structure it’s a different story. There are critters galore which have colonised the accumulated flotsam and jetsam of the last 130 years or so!

The jetty comes out about 50m from shore. And the various sections stretch about 150m along it, so there is quite an area to cover. But there is a lot to see with scorpionfish, stonefish, toadfish, crocodile-fish, octopuses down in the rubble. And baitfish, batfish, convict-fish, catfish and angelfish swirling around the pylons.

There are two ways to dive Milne Bay… Either you can base yourself on the north coast at Tawali Dive Resort and concentrate on the East Cape and Nuakata Island sites. Or you can use one of the two liveaboards that operate there and mix those northern sites with some of the southern ones.

Tawali’s location on the East Cape peninsula means that excellent sites like Wahoo Point are just minutes away from the resort by day-boat. While Deacons Reef, Dinah’s Beach, Coral Gardens and Barracuda Point are about 30 minutes away.

The farthest sites on the tip of the East Cape, Nuakata Island and the seamount sites are at most a 60-minute journey.

2-3 dives per day, with lunch on the boat are the norm and late afternoon or night dives are available on the house reef at Tawali.

There are two liveaboards currently operating in Milne Bay – the MV Chertan and MV Oceania.

Chertan has been based from Alotau for nearly 35 years. And, without doubt, its skipper and owner Rob van der Loos knows Milne Bay better than any other single individual.

He is also a very accomplished underwater photographer specialising in exotic critters and the smaller side of things!

Rob’s itineraries cover both the north and south of Milne Bay. But if critters and macro photography are your thing then the south is the best choice. As both Rob and Chertan enjoy a stellar reputation among devotees of the small, wierd and wonderful creatures of the sea.

Oceania is skippered by Dan Johnson, another long-term Papua New Guinea resident, who normally bases the boat from Kimbe Bay on the north coast of New Britain.

But every year Oceania relocates to Milne Bay in February and March. All part of Dan’s plan to operate the boat year-round in the best locations in Papua New Guinea.

Completely refurbished a couple of years ago, Oceania is a wonderful boat and very well operated. Its Milne Bay routes are designed to get to the best sites in both the north and the south – so it’s a great choice if that is what you are looking for.

Milne Bay is an all-year round destination. The shape of the bay itself and the many islands of the province mean that sheltered locations can always be found.

But to dive Milne Bay at its very best, you should visit from November through to late March. As that is the dry season for that part of Papua New Guinea and the minimal run-off from the rivers and streams means that underwater visibility can be exceptional

How to get There

The only really viable option for getting to Milne Bay is by air from Port Moresby to Alotau’s Gurney (GUR) airport. Which is served on a regular basis by both Air Nuigini and PNG Air.

Located as it is in the heart of the Coral Triangle, Papua New Guinea has some amazing diving. And Milne Bay has some of the very best. But you do have to make a bit of a choice between concentrating on the north or the south of the Bay…

What would be the perfect trip? Well for me it would be about 5 or so days at Tawali to sample the wonderful north coast sites. Followed by a liveaboard trip – on Chertan if critters and macro are your thing. Or on Oceania if you want the best of both worlds!

Scuba Diver ANZ have published a five-page article of mine on Diving Milne Bay in PNG and you can use the lin download a copy. 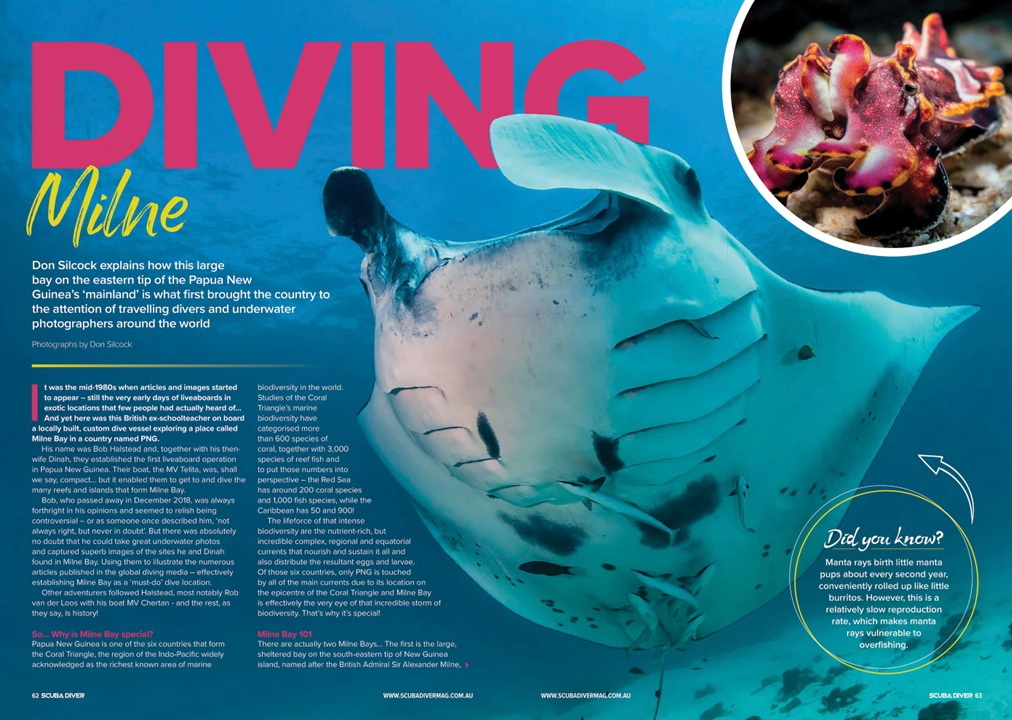 Conserving Tubbataha – The Garden of Eden…
Next Post: Diving Kimbe Bay in PNG