The Milne Bay north coast dive sites really do offer some tremendous diving. And range from vibrant and healthy fringing reefs to excellent black sand critter diving. With some superb offshore sea mounts thrown in between…

The north coast sites are concentrated into two main areas. The coastal ones along the Solomon Sea side of the north coast. And those on the East Cape and around Nuakata Island.

Both areas are nourished by the complex and seasonal monsoonal currents that run up and down the north coast on New Guinea island. 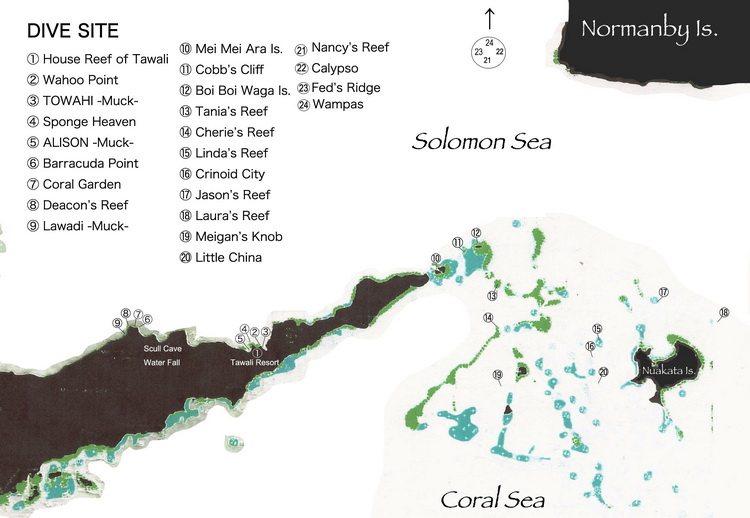 There are a total of 24 sites in the overall area with 9 coastal ones. Another 3 on the East Cape and the rest are mainly seamounts in and around Nuakata Island. All have their specific features and attractions that cannot really be covered in a short article like this.

So, I am going to describe a few of what I consider to be the very best and are my personal favorites. Starting with what is possible my favorite dive site in Papua New Guinea!

Named after the well-known Sydney based underwater photographer and dive shop owner Kevin Deacon – Deacon’s Reef is, in my opinion, possibly one of the very best sites in all of PNG!

It is very much a wide-angle type of dive and on a bad day it is good… But on a good day it is simply phenomenal!

Deacon’s is located on a headland near the small village of Lauadi. And those nutrient-dense coastal currents have created an incredibly rich array of beautiful hard corals, sponges and sea fans.

And, because it is a relatively shallow dive, it is bathed in light. So it’s a delight to photograph! Plus, the nearby deep waters mean that there is a good chance of seeing cruising hammerheads, whale sharks and oceanic mantas out in the blue.

It truly is a great dive – spectacularly so when the conditions are optimum. And you can use the following link to read more about Deacon’s Reef.

Just inside the bay, formed by the headland where Deacon’s Reef is located, is the birthplace of muck diving!

“Dinah” is Dinah Halstead, the first wife of the legendary Bob Halstead. Together Bob and Dinah basically established liveaboard diving in Milne Bay and put the place on the international dive travelers map.

Just off the beach in front of Lauadi is where Bob managed to convince passengers to forego the delights of nearby Deacon’s.

And instead switch to a macro lens and check out the black sand and assorted flotsam and jetsam for critters.

It was quite a hard sell at first, but from those humble beginnings we now have a whole new world to explore.

Because Dinah was from Lauadi, it is very appropriate that the site is named after her!

You can use the following link to read more about Dinah’s Beach.

Located on a similar headland to Deacon’s and also swept by those rich coastal currents, Wahoo is another “must-do” dive.

The defining feature of Wahoo Point are the huge elephant ear sponges. They are incredibly photogenic and the likes of which I have not seen anywhere else on all of my travels!

There are a lot of other nice things to see at Wahoo, if you can tear yourself away from those big sponges…

Like many of the coastal reefs on the north coast, Wahoo is a site where there is a good chance to see the “big dogs” of the sea.

And there are regular sightings of mobula and manta rays, hammerheads, tiger sharks, minke whales and whale sharks.

Personally though, I find the huge elephant ears sponges quite captivating…

And so I usually end up spending most of the dive trying out different angles to photograph them.

Wahoo is located on a shelf that starts at about 5m in depth and slopes down to about 18m before plunging down vertically to over 60m.

The elephant ear sponges are on the slope and they make incredibly photogenic subjects because of their vivid yellow and green coloration that really stands out against the clear blue water.

If you can add a model to give the size of the sponges some perspective. And you have all the ingredients for some really great photography – but don’t forget your wide-angle lens!

The vertical wall down to 60m is where the regular sightings of pelagics have been made. While many of the dive sites on the north coast have regular sightings, Wahoo seems to get more of them. And more often…

Cobb’s Cliff is another fringing reef dive site, but located on the East Cape. And, like Wahoo Point, Cobbs is also surrounded by deep 60m+ water which comes up to within 6m of the surface.

Similarly, migrating pelagics are also commonly sighted along its steep walls. But what is quite different about Cobbs Cliff is the nice, but reasonably shallow, lagoon in the center of the site.

Which makes Cobb’s a really interesting dive and provides a wide variety of things to see.

From the possibility of the pelagics on the walls to smaller, colorful stuff like Rhinopias, leaf scorpion fish and goby’s in the lagoon.

Yet another great example of the amazing biodiversity of Milne Bay!

Back To: The Complete Guide to Diving Milne Bay