The Tiger Sharks of the Bahamas… Open water (no-cage) encounters with Tiger Sharks are incredible experiences. They are large and extremely powerful creatures that exude total confidence. And they have a commanding presence that allows them to completely dominate the proceedings.

Tigers are rarely seen underwater and, even when they are, the encounters are typically fleeting at best. Everywhere that is except for the Bahamas. Where at key locations and at certain times of the year, they are almost a permanent fixture! So what is so special about this island nation in the western Atlantic?

With what now looks like incredible foresight… The Bahamas was one of the first countries to establish a marine protected area – way back in 1958 when the 176 square-miles Exuma Cays Land and Sea Park was created. The Bahamas was also the first country in the wider Caribbean area to implement a “no-take reserve”. When in 1986 all fishing was prohibited in the Exuma Cays.

Since then it has added another 26 national parks, with over 1 million acres of land and sea now protected! Then in 2011 the Bahamas went one step further. Becoming only the 4th country in the world to establish a shark sanctuary. With all sharks in Bahamian waters now formally protected by law.

The Tiger Sharks of the Bahamas – Shark Tourism

By protecting its territorial waters the way it has, the Bahamas has created a safe haven for apex animals like the Tiger shark. One where the female sharks can go after they have conceived and give birth in relative safety.

Over time this has had a dramatic impact on the overall number of sharks in the Bahamas. And is why it has become the very best place to see sharks in the open water. It also means that the Bahamas dive industry has become the world’s largest and brings in around $114m annually. With some 99% of that revenue coming from shark tourism!

The Tiger Sharks of the Bahamas – Apex Predators

Tiger Sharks (Galeocerdo Cuvier) are the largest predatory fish in tropical seas. And they get their name from the dark, vertical stripes mainly found  on juveniles. Which, as they mature start to fade and almost completely disappear. 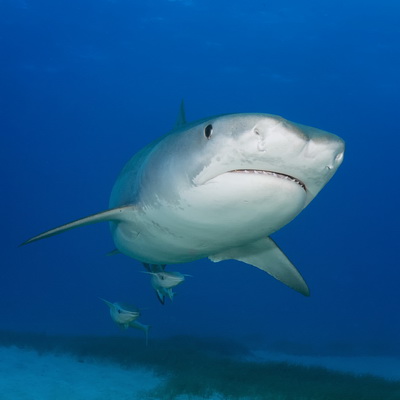 Their large blunt-nose and significant girth gives them a very formidable and intimidating presence. Plus they have a reputation as man-eaters and are said to be second only to great whites in attacking people…

But because they have a near completely non-discerning palate, they are not likely to swim away after biting a human, as great whites frequently do!

They are the complete scavenger. With superb senses of sight and smell and an almost limitless menu of diet items.

The Tiger Sharks of the Bahamas – Tiger Beach

The very best place to see the Tiger Sharks of the Bahamas is Tiger Beach. The shallow sandy area, some 30km north-west of West End on Grand Bahama that basically put the Bahamas on the map for shark tourism.

Satellite tagging of Tiger Sharks has revealed very consistent migration patterns. With 5-6 months of the northern spring and summer months spent in the open Atlantic Ocean to the north and west of Bermuda. Followed by a migration south to the Bahamas where they spend the autumn and winter months.

It is believed that the months in the open ocean are related to mating and feeding on the migratory loggerhead turtles that pass through at that time of year. While the time spent in the Bahamas is related to gestation. As most of the tiger sharks observed at Tiger Beach are females and many of them are pregnant.

The respected wildlife magazine Anima Mundi recently published a comprehensive 18 page illustrated article of mine which documents my experience at  Tiger Beach and what I learned.

You can use this link to download the at Tiger Sharks of the Bahamas article.

The Humpback Whales of Tonga
Next Post: The Manta Rays of Milne Bay