The Bahamas Shark Sanctuary – The true relationship between sharks and man in the sea is not that easy to understand. We are after all terrestrial creatures that submerge under the water briefly at best. So our opportunities to even comprehend the underwater world are somewhat limited…

Whereas the oceans are where sharks live. It is their home and their natural environment – one that they try to dominate. And few creatures can provoke the irrational, almost primeval fear within us the way that sharks do.

Without doubt the mass-media has played a significant role in creating this extremely negative perception of sharks. Leveraging our general lack of understanding into cheap but effective headline news whenever an attack does happen.

But the sad reality is that the twin scourges of long-lining and gill-netting have decimated the global shark population. Mainly because the rise of China has created an almost insatiable desire for shark fins. The signature ingredient for the soup of the same name. The consumption of which is an excellent way of signaling that you have arrived in Chinese society.

Gone are the days when the Short-Fin Mako Shark was a relatively common sight in the Mediterranean. Or Silky Sharks were abundant in the Gulf of Mexico. The shark-finners having decimated those populations by 70% and 86% respectively.

It’s a similar story in the north-west Atlantic Ocean, where the Great Hammerhead Shark population has plummeted 89%. And the Central Pacific where there has been a 90% decline of the Oceanic Whitetip.

The numbers involved are simply absurd. With an estimated 200,000 sharks being caught each day. Or put another way about 73 million sharks are removed from our oceans every year. All driven by the incredible demand for a soup that has to be flavored artificially, because it’s principal ingredient adds little more than a specific texture to the broth…

Everywhere that is except in the Bahamas, which has basically become the shark capital of the world…

This island nation in the north-west Atlantic Ocean was a leader in recognizing the importance of protecting territorial waters. Becoming one of the first countries to establish a marine protected area, when in 1958 it created the Exuma Cays Land and Sea Park. A total area of some 176 square-miles. Which the Bahamas claims was the first such park and one of the most successful marine parks globally.

It was also the first “no-take reserve” in the wider Caribbean area when in 1986 all fishing was prohibited in the Exuma Cays. The Bahamas has since added another 26 national parks, with over 1 million acres of land and sea now protected!

Then in 2011 the Bahamas went one step further. Becoming only the 4th country in the world to establish a shark sanctuary. With all sharks in Bahamian waters now formally protected by law.

Bahamas Shark Sanctuary – But Why? 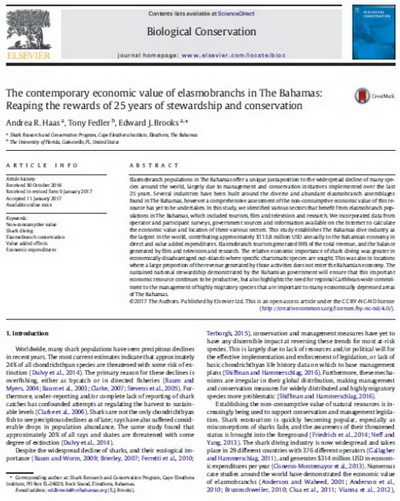 The harsh reality is that the Bahamas was never at the bleeding edge of the conservation movement.

And the country has suffered from exploitation of its fish stocks plus over-development of tourist resorts in ecologically sensitive areas.

But that said, there is no other major industry in the country apart from tourism. And Bahamians generally understand the link between healthy surrounding waters and their long-term prosperity.

So the lead taken by the Bahamas in protecting their seas is popular politically – plus it generates incremental tourism.

The creation of the Bahamas sanctuary is tacit recognition of the overall importance of sharks to healthy seas. And specifically to the overall health of fisheries. Plus there is the cold hard fact that a live shark is worth a lot more in tourist dollars than a dead one.

The dive industry in the Bahamas is said to be the world’s largest and brings in around $114m annually. With some 99% of that revenue coming from shark tourism!

The marine environment is a complex and multi-faceted thing. But if there is one global truism it is that everything has its place in the greater scheme of things. And 400 million years of evolution have produced what could be referred to as a “fine balance”.

Sharks are a very necessary part of that balance and can be thought of as the masters of their ecosystems. Whether that be a reef or open ocean. Their role at the top of the marine food chain means that they clean up the oceans with ruthless efficiency. The very thing that seems to most intimidate us humans!

Without sharks the dead, the dying, the diseased and the dumb of the oceans can pollute and degrade the health of those ecosystems. Along with the genetic quality of its inhabitants. The many species of sharks are there for a reason. And they have evolved superbly, in true Darwinian fashion, to execute their mission.

Remove the sharks and disruption occurs. Something marine scientists refer to rather prosaically as “trophic cascades”… Think of the shark as the first in a long line of finely balanced dominoes and if it is tipped over the rest start to go down as well. The impact of shark finning in the Caribbean illustrates the impact of such cascades extremely well. For when the shark population declined it removed one of the natural limitations on the number of groupers in those waters.

Groupers have voracious appetites and also breed rapidly. But a healthy shark population would keep overall numbers in check and maintain that fine balance. However as the number of sharks declined it allowed the number of groupers to increase. And they subsequently consumed a disproportionate number of reef fish, which meant that the naturally occurring algae was no longer being consumed. So the reefs started to die.

There is no quick fix for these events because sharks grow slowly. They mate intermittently, have long gestation periods and do not mass produce their young. Sharks are basically an incredibly important part of our marine ecosystems. And removing them en-masse, like the long-liners have done, results in immense disruption to our oceans.

The ultimate impact of all this is still far from understood. But the worst case scenarios are indicating a total global collapse of fisheries stock by 2048.

Nature has an incredible ability to restore itself when we humans get out of the way and the Bahamas is an outstanding testament to that! The way the shark population has recovered in the safe haven provided by the shark sanctuary is simply amazing. The incredible shark encounters to be had at Tiger Beach, South Bimini and Cat Island all point to the same thing… The Bahamas is an extremely important area for sharks!

The indications are that these apex sharks, that have suffered so badly from long-lining and gill-net fishing are using the Bahamas as a safe haven. Almost a nursery, where the female sharks can go after they have conceived and give birth in relative safety.

If only there were more such places!