Kavieng Dive Sites… There is a lot to see underwater around the northern tip of New Ireland. Starting with Kavieng’s signature WWII aircraft wrecks and a scuttled Taiwanese fishing boat. Then there are the dynamic walls and channels in the south, some excellent reefs and the schooling pelagics!

The aircraft wrecks are a legacy of World War II and the Japanese occupation of Kavieng. While all the other great things to see are a function of the rich waters that flow between New Ireland and New Hanover.

Depending on the tides, and there are up to six per day… Those waters either flow from the Pacific Ocean, rich with nutrients from the deep-water basins to the north. Or from the equally rich Bismarck Sea to the south.

When the Japanese forces invaded Papua New Guinea in January 1941, they landed first at Kavieng. And soon after at Rabaul, in nearby New Britain.

The military base established in Kavieng was much smaller than the one at Rabaul. But it was very important strategically as it was the back-door of the overall invasion. And it was from Kavieng that the Japanese guarded their rear flank as they pushed further in to PNG.

So when the tide of the war in the Pacific changed in 1943, Kavieng became an important target for the Allies. While above water there is very little left to see from those offensives, underwater is a different story! 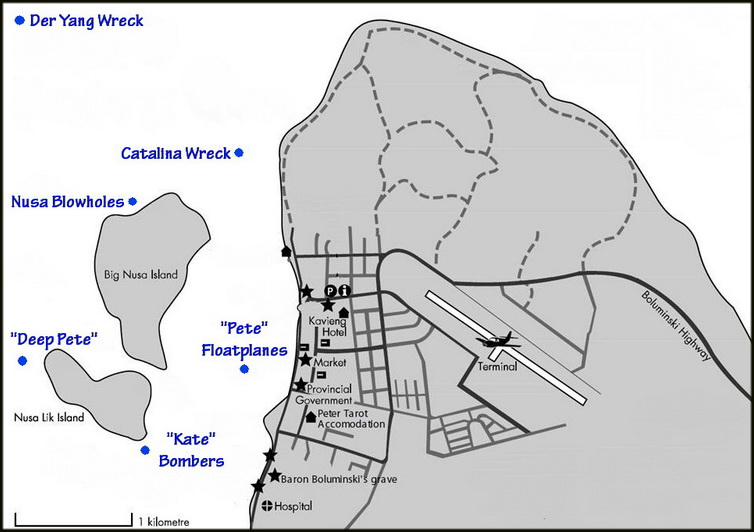 As described on the Diving Kavieng page, there are two distinct and separate diving areas…

Those in the north, on the Pacific Ocean side of Kavieng, and those to the south on the Bismarck Sea side.

In the north, in and around the harbor, there are a total six WWII aircraft wrecks.

They range from the remnants of one of the illustrious RAAF PBY Catalina flying boats.

To my personal favorite the “Deep Pete” – the wreck of a Japanese Mitsubishi F1M floatplane.

Then there is the wreck of the Der Yang, A Taiwanese long-line fishing boat that lays on its side in 30m of water in the clear blue waters to the north-west of Kavieng.

The Der Yang was scuttled in 1988 and makes for a really excellent dive and a great alternative to the aircraft wrecks.

Finally, if you have had your fill of wrecks. There is the Echuca Patch reef near the Der Yang. Plus the very interesting Nusa Blowholes site with its caves, swim-throughs and healthy population of white-tip reef sharks.

On the Bismarck Sea side of Kavieng there are also numerous excellent sites. However all share the common characteristic that they are at their very best when dived on an incoming tide. As the prevailing currents sweep in the clear blue waters from the Bismarck Sea.

But, in an area where there can be up to six tides per day… Picking the right time to enter the water requires significant local knowledge.

Get the timing wrong and you will either end up with the out-going tide.

Which carries with it the detritus from the islands and mangroves it has swept through. Meaning really bad visibility…

Or you will feel like somebody pressed the spin-cycle button on you. Because at their peak, the in-coming tides reach warp speed!

Timed to perfection would have you in the water as the incoming tide from the Bismarck Sea has flushed away the detritus.

And there is enough current to stimulate the marine growth and schooling pelagics. But you can still swim against the current and savor these superb sites.