The Ten Best In-Water “Big Animal” Experiences… There really is something quite unique about an eyeball-to-eyeball underwater encounter with a big animal. You are after all but a temporary visitor to their domain. One they may not be the absolute master of, but are far more in control than you can ever hope to be. So, the first thing to understand is that the encounter will take place on the animals’ terms.

You can (and I have…) travel half-way around the world. At not inconsiderable expense, to get the opportunity to be in the water with the specific animal. Only to discover they just are not interested in any kind of interaction. The second thing about big animals is that no matter how big the animal actually is. The ocean is much, much bigger and it’s a three-dimensional medium… So there are multiple directions for them to disappear into that endless blue!

But all that said, when the creature does interact with you it’s hard to describe the sheer intensity of the experience. A unique mixture of fear, incredible excitement, and absolute wonder.

Great Whites have an “image problem” and are widely demonized as ruthless man-eaters. Responsible for the deaths of numerous surfers, swimmers, and divers. And while it is true they are superbly evolved apex predators, they are not the fiendish killer they are made out to be.

There are over 400 species of sharks and they have a specific role in the oceans… Removing the dead, the dumb and the dying and are a key part of how nature keeps the world’s marine ecosystems healthy, vigorous and balanced.

To understand how the Great White fits in that process you need to see them underwater. And the only way you can really do that safely is in a cage… Great White shark cage diving was pioneered in South Australia and is one of only four locations where you can do it globally. The others are Guadalupe Island in Mexico, Gansbaai in South Africa and Stewart Island in New Zealand.

Check out Australian Great White Sharks – The Complete Guide for all you need to know on these incredible creatures.

The “Tonga Tribe” is one of six southern hemisphere Humpback Whale populations. And every autumn they embark on a 6,000 kms long migration from their Antarctic feeding grounds to the Tongan archipelago.

They make that epic journey to mate. And allow pregnant females to birth and nurse their calves in the warm waters of the archipelago. Tonga is one of a few locations where limited numbers of people can enter the water. And the encounters possible across the archipelago could fill several bucket lists!

The incredible bond between mothers and their calves will pluck all parent’s heartstrings. While dropping into the path of a large female and entourage of competing male suitors during a “heat run” is potentially heart-stopping!

The restricted number of operators means that availability is limited. So do your research and be prepared to book up to a year in advance. Check out the Complete Guide to the Humpback Whales of Tonga for comprehensive insight to the annual aggregation in the Pacific.

Tiger Sharks are just below the Great White on the apex predator index. And have a reputation for being dangerous and unpredictable.

They are pelagic, open water animals and so encounters can be quite rare. Apart from at Tiger Beach on the western end of Grand Bahama, which has become the Tiger Shark capital of the world.

Being in the open water with Tigers is a life-changing experience… As their intense physical presence and size is, shall we say – somewhat intimidating!

While there have been “incidents”, given the number of divers who have experienced Tiger Beach, the encounters are remarkably safe. Largely, it seems, because the rich waters of the Bahamas mean the sharks are very well-fed.

The season is from October through to May. Check out Is Tiger Beach Safe for more details on this amazing location.

Oceanic Mantas are true giants with a 7m wingspan. And yet despite their size and rather sinister sobriquet of “devil ray” are totally harmless to humans.

Plankton feeders with few natural predators. They spend their life in the open ocean and so encounters with them are unusual, but absolutely enchanting! As they are social animals with large brains and are known for their intelligence.

The only reason for Oceanic Mantas to come to you is curiosity – something their intelligence has given them in spades… And when you look in their eye and you can sense that inquisitiveness as they check you out!

The best place to see them is Mexico’s Revillagigedo Archipelago where significant numbers of Oceanic Mantas aggregate together. Known as the Mexican Galapagos, the UNESCO listed archipelago is 450 km southwest of Cabo San Lucas on the tip of Baja California.

Check out Diving Socorro for an in-depth insight into the Revillagigedo Archipelago.

Another true pelagic they hunt for the much-feared Giant Squid in depths in excess of 1km for up to an hour at a time.

The underwater mountains of the North Atlantic Azores archipelago are one of the few locations they gather regularly.

Similar to the matriarchal groups formed by female elephants. Female Sperm Whales form pods with their calves, while the male bulls live apart.

September is the end of the calving season and the optimum month for a “Holy Grail” encounter with a pod of females socialising at the surface.

Check out Sperm Whales of the Azores to understand more about these incredible  creatures and the Azores archipelago.

American Crocodiles are cousins of the hyper-dangerous Saltwater Crocodile. Unlike “salties” though, they are not considered aggressive towards humans.

They are found from the Florida Everglades, throughout Central America and into South America.

But by far the best place for encounters is Banco Chinchorro, in south-east Mexico.

Chinchorro is one of the largest coral atolls in the Northern hemisphere. And the crocodiles are resident at Cayo Centro, the atoll’s main island.

Being in the water with any big animal is an exciting experience. But American Crocodile encounters take that to a higher level as they are large, powerful creatures. That sit watching like a coiled spring – full of intense kinetic energy.

It’s 35km from the town of Xcalak and the only accommodation at Cayo Centro are the palafito fishermen’s huts in the lagoon. In a word, it’s basic…

Check out Chinchorro Crocodiles for details of these exciting encounters.

Large solitary animals Great Hammerheads are extraordinary looking creatures. They seem to sashay towards you as their large “hammer like” head and wide-set eyes, sweeps from side to side.

Nomadic in nature, they prefer the deeper waters along continental shelves. Making encounters almost impossible to predict and when one occurs it’s typically brief and fleeting.

Except in the shallow waters off the west coast of South Bimini in the Bahamas where they gather during the winter months.

The annual aggregation was discovered by the Bimini Shark Laboratory. Who managed to keep it all quiet for 10 years… But the word is out and South Bimini is now Great Hammerhead Central!

With a reputation for aggressive hunting, but rarely towards humans. The daytime encounters with Great Hammerheads in Bimini seem almost choreographed… Until the night dive, but that’s another story!

Check out the Great Hammerheads of Bimini for more!

The largest fish in the sea appears to move through the water at a leisurely pace. Until that is you are swimming alongside one and desperately trying to keep up.

Whale Sharks roam the world’s tropical seas in search of their food of choice – plankton and small fish they filter feed through their huge mouths.

But will gather in significant numbers when nature creates an opportunity for them to gorge. Such as the annual coral spawning at Ningaloo in Western Australia.

But, by far the biggest event is the Afuera north of Isla Mujeres near Mexico’s Yucatan Peninsula. Where, every August, some 500 of these giant creatures gather for the massive spawning of little tunny fish eggs.

Check out the Whale Sharks of Isla Mujeres – the Afuera” to read more.

Big enough to get your undivided attention is how an encounter with South African Raggy Tooth Shark was once described to me.

Large creatures with an impressive set of teeth. Their size and appearance instill an irrational fear in the uninitiated as they patrol the caves they hang out in during the day.

One of the best-known aggregations of Raggy Tooth Sharks is at the Protea Banks, about 130 km south of Durban on South Africa’s east coast.

Every year, come winter, hundreds of “Raggies” gather at Protea to mate. Providing a wonderful opportunity to get up-close and personal with them.

Check out the Ragged Tooth sharks of the Protea Banks to read more about this annual aggregation.

It has been called the “premier marine attraction on the planet”. Where every May, Giant Australian Cuttlefish arrive along a stretch of coastline near Whyalla in South Australia’s Spencer Gulf. And, by the mid-June, some 100,000 of these wonderful creatures will have gathered to mate.

Polyandry is the technical term for that mating. And means that females will have multiple male partners to ensure greater genetic variability. But with a ratio of 8-10 males per female, a better description would be “spectacularly promiscuous”.

It’s a fascinating experience to observe the tricks used by the males to get the female’s attention. From the flamboyant “displays” to the “sneakers” masquerading as females to slip into the harem!

Check out the Complete guide to Australian Giant Cuttlefish to understand more about the cuttlefish and their unique annual aggregation.

The ANZ edition of Scuba Diver magazine have published a five-page article of mine on the Ten Best Big Animal Experiences and you can use the link to download it! 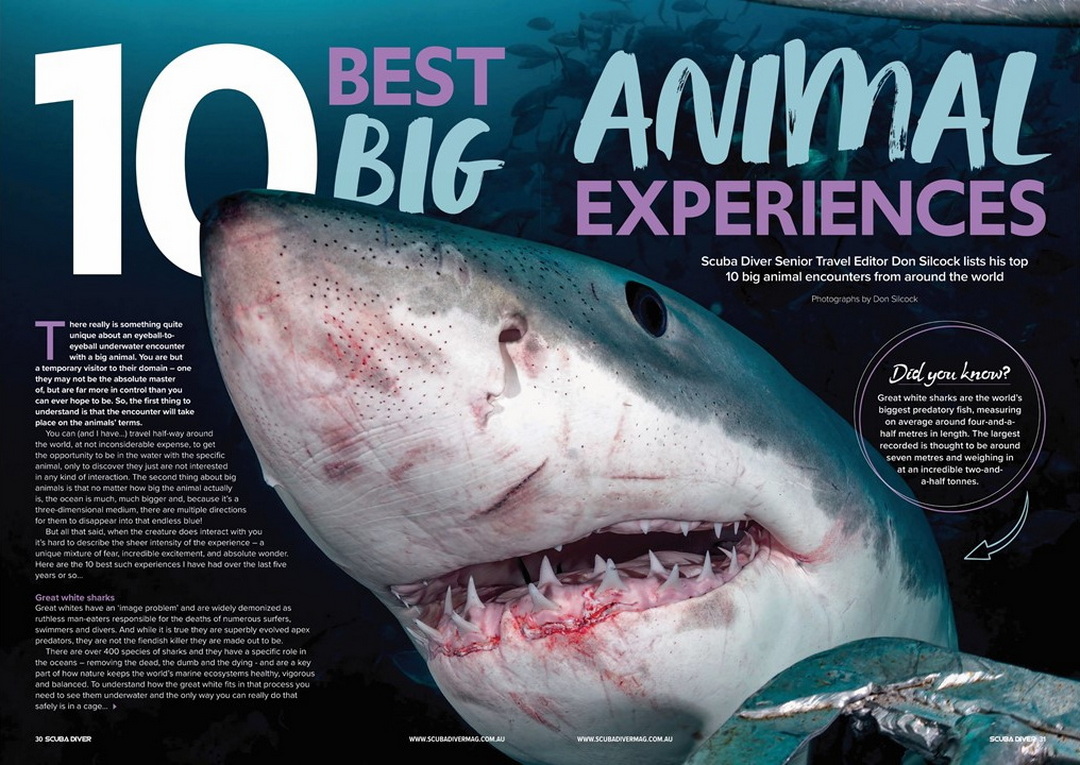 The Australian Grey Nurse Shark
Next Post: Diving Tubbataha – The Heart of the Coral Triangle