The Sperm Whales of the Azores – elusive but wonderful creatures. These incredible animals are one of the the main highlights of this remote archipelago located in the middle of the North Atlantic Ocean.

Like the tips of icebergs, the islands of the Azores archipelago are just the visible peaks of a remarkable chain of underwater mountains that rank among some of the highest in the world.

Those mountains rise up from the Azores Plateau – a huge area of nearly 6 million km2. Which in itself is just a small part of the Mid-Atlantic Ridge that runs the length of the Atlantic Ocean. From the far north and the Arctic Ocean, to the deep south and the Southern Ocean.

The Azores Platform is some 2000m below the ocean surface. But the Mid Atlantic Ridge is grounded on to the sea bed another 2000m below that. While the tip of Pico (the tallest island of the archipelago) is 2350m above sea-level. Making the mountain that is Pico about 6500m high in total elevation.

Sat as they are, roughly halfway between the edge of southern Europe and the tip of North America. The nine islands of the oceanic archipelago offer the only shelter from the notorious seas of the North East Atlantic.

Underwater, that archipelago sustains an incredible ecosystem. Because those nine visible peaks are just a fraction of the 100+ underwater mountains and seamounts. Which are both a beacon to marine life. And a catalyst for the interaction between the many pelagic species that aggregate there.

The Sperm Whales of the Azores – Location…

Situated at the junction of the North American, Eurasian and African tectonic plates. The Azores Platform and its underwater mountains were created by intense seismic and volcanic subductive interaction between those plates.

Swept by the warm tendrils of the southern Gulf Stream, rich in tropical nutrients and dissolved organic nitrogen. The archipelago is far enough south from the frigid winter waters of the Arctic, that even in midwinter the area can support the food-webs necessary to sustain a complete marine ecosystem.

So, while the rest of the North Atlantic is practically barren at that time of the year. The Gulf Stream creates rich upwellings around the mountains and seamounts of the Azores. Which become fertile oases to which the large pelagic animals of the region aggregate.

Come spring and rising temperatures the Azorean waters burst in to life with huge planktonic blooms and krill spawning events. Creating the perfect feeding conditions for the hungry great whales of the northern hemisphere. Which are migrating north to their Arctic summer feeding grounds.

Encounters with Sperm Whales of the Azores

The deep waters, undersea mountains and overall ecosystem of the Azores make it an almost perfect location for sperm whales. Deep-diving animals that hunt and feed on the giant squid that abound in the depths around the archipelago.

It is also one of the few places in the world where, under a special permit from the Regional Environment Directorate, it is possible to be in the water with the sperm whales. 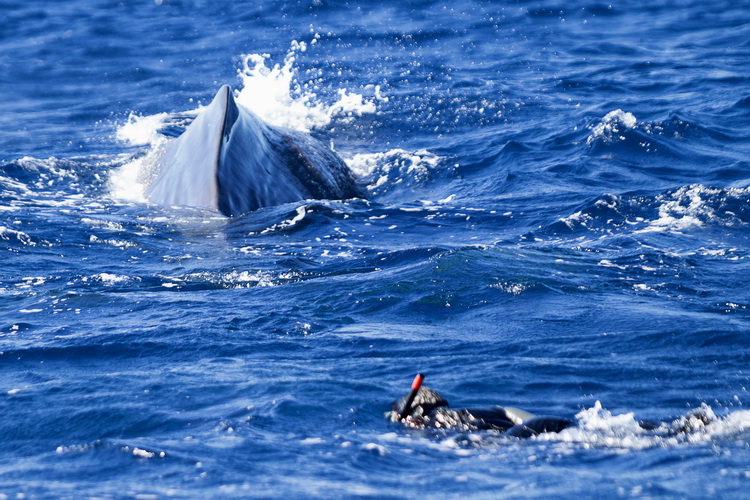 September is the optimum month to experience the sperm whales of the Azores underwater. Because the onset of autumn brings the best visibility and the water temperature is still reasonable. Plus most of the tourists have departed!

It also the end of the main calving season. Which starts in July and means there is the highest chance of encounters with curious juvenile sperm whales.

I was based in Madalena, the main town of the picturesque island of Pico in the central Azores. The island is dominated by its volcano Mount Pico – the highest point in the archipelago and in all of Portugal.

A drive up to the flanks of the volcano on a clear day affords a view that seems to stretch to eternity. It also puts in to perspective the isolation of these incredible islands far out in the North Atlantic.

Vigias and the Sperm Whales Spotters

It is that very view, combined with the nature and tenacity of the Azorean people, that allowed a shore-based sperm whaling industry to succeed.

Because from up on high it is possible for an experienced whale-spotter to not only see the ”blow” of a whale at the surface up to 50km out at sea.

The spotters could also tell what type of whale it was from the blow!.

The whale look-outs are called “vigias” and they are distributed around the islands of the Azores.

Positioned at strategic locations to provide virtually complete panoramic coverage of the waters.

Somewhat ironically, the same methodology is used to this day to spot the whales and guide the whale watching boats to them.

Although mobile phones have long replaced the elaborate small rocket firing and white sheet signalling that were originally used!

How Many Sperm Whales Are There?

The total number of sperm whales globally is not known, but the most commonly used estimate is 360,000. A number extrapolated in 2002 by Hal Whitehead, the Professor of Biology at Dalhousie University in Nova Scotia. Who used an innovative mathematical model and a variety of existing data.

He also estimated that the number of sperm whales before hunting began was probably about 1.1m. But early open-boat whaling reduced that number by some 29% by 1880 to around 780,000 animals.

From then on there was a slight but slow recovery through to the end of WWII. Then the introduction of industrial-scale hunting completely devastated the global population of sperm whales. Reducing it to the estimated 360,000 – 32% if its original number!

Whitehead also attempted to estimate the possible rate of recovery for the global sperm whale population. Concluding that 1% per year was the maximum possible, which if correct would mean that there about 420,000 whales.  Just 38% of that original estimated population…

The general scientific consensus seems to be that a 1% increase per year is overly optimistic. Because it does not (cannot…) take in to account the ratio of male and female whales taken by the whalers. And the inevitable impact that would have on the social and reproductive behaviour of the global population.

So, the best guess seems to be in the region of 380,000 to 400,000 sperm whales alive today and explains why they are still classed as “Vulnerable” on the IUCN Red List

The total sperm whales of the Azores number is also not known. But from the results of various surveys that have been conducted it seems that a reasonable estimate is about 2500.

That number includes the small, but unknown, number of whales that are year-round residents. Together with those that are known to migrate between the Azores and other areas of the North Atlantic.

Put in very simple terms, the total area of the Azores is just under 2400 km². So if there really are 2500 whales that would be roughly one per km². But sperm whales are very gregarious animals and females usually gather together with their calves in social groups, typically with one or two males.

Then allow for the fact that sperm whales socialize at the surface for about 25% of their time. They spend the other 75% foraging in the depths for food… And so you quickly get the picture that when a group is encountered the chances of spending much time with them is limited to say the least…

Add to that the basic fact that whaling ended in the Azores less than 30 years ago. And the average age of a sperm whale is believed to be at least 50 years. It’s easy to understand their reluctance to linger at the surface when they hear boat engines approaching!

So, while we had many encounters with the sperm whales of the Azores. There was virtually no close interaction or intimate moments of connectivity with them. As they typically would move away at best, or dive as we got close. So we were limited to drive-by photography most of the time.

Sperm Whales of the Azores Approvals…

All images taken under a special permit granted by the Regiao Autonoma Dos Acores, Secretaria Regional Do Ambiente E Do Mar, Dreccao Regional do Ambiente.

Back To: Diving the Azores