Australian Scuba Diving Overview – Aussies generally have a huge affinity for the sea. And about 85% of the 25m the citizens  live within 50 km of the coast.

The 36,000 km coastline of Australia is incredibly vibrant and bio-diverse. With the rich Pacific, Indian and Southern Ocean currents creating superb marine ecosystems. And the most famous being the Great Barrier Reef on the north-east coast of Queensland.

But over on the north-west coast of Western Australia is the less well-known Ningaloo Reef. While both the south-east and south-west coasts have their own bio-diversity hot spots.

There is just so much to see that it is impossible to cover it all. So I can only give you some basic insight and explain a few key points…

When most visitors think of Australian scuba diving for their next vacation. In all probability the warm tropical waters of Queensland and its famous Great Barrier Reef come to mind.

The numbers say it all about the Great Barrier Reef. 2300km long and stretching along the Queensland coast from Bramble Cay in the north to Lady Elliot Island in the south. The world’s largest coral reef system with over 2,900 individual reefs and 900 islands. Visible from outer space and a World Heritage site!

While there is some great diving in Queensland. Don’t lose sight of the fact that the “Great” in the Great Barrier Reef refers to quantity, not quality…

And, at the risk of being accused as unpatriotic towards my adopted country – not to mention my former home in Queensland… The sad reality is that things are really not well on the Great Barrier Reef.

It is basically suffering from a horrendous combination of circumstances. All of which seem to be happening at the same time – not least of which is climate change. And then there is the huge run-off from the massive Queensland sugar industry. Plus dredging and the recurring plague of crown of thorns starfish.

The overall situation has been well documented globally. Back in October 2012 the National Academy of Sciences in the USA published a report stating that the reef has lost more than half its coral cover since 1985. Then in October 2016 Outside published an obituary for the reef. Followed in March 2017 by the journal Nature’s paper showing that huge areas of the reef ad died in 2016.

You can be sure that things are pretty bad when government’s agree to spend significant amounts of money. With the Australian Federal Government joining with the Queensland State Government to implement a long-term plan. One can only hope that it is not too late to turn the situation around!

Personally I think that South Australia has probably the most interesting diving in Australia. The state’s jetties were built to facilitate the export of the mining industry. But time and the rich currents of the area have turned them in to incredible ecosystems.

They are host to an amazing variety of creatures, including the incredible the Leafy Sea Dragon. And are simply a joy to dive – you can literally spend hours exploring them.

Then there is the amazing and totally unique annual aggregation of Giant Australian Cuttlefish at Whyalla in the Spencer Gulf. And no discussion about South Australia would be complete without the Great White Shark. Hugely feared, but greatly misunderstood Great Whites are part of the landscape down south…

Back To: Scuba Diving in Australia

Australian Scuba Diving Overview - Aussies generally have a huge affinity for the sea. And about 85% of the 25m the citizens  live within 50 …

The Australian Great White Shark - Probably the most feared and most misunderstood animal in the great brown land down-under! In a country … 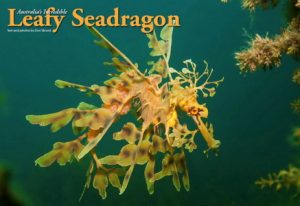 The Incredible Australian Leafy Seadragon - The great brown land down under, is home to many iconic and often strange-looking creatures. …