Diving Kimbe Bay in PNG… There is a line of thought among the scientific community that this large, sheltered bay. Located  roughly one third along the north coast of the island of New Britain is possibly where the first corals originated.

The bay is called Kimbe. And is no doubt about its tremendous biodiversity because the numbers, as they say, cannot lie…

Surveys of Kimbe Bay led by distinguished marine biologists Charlie Veron and Jerry Allen. Together with The Nature Conservancy, have identified some 860 species of reef fish, 400 species of coral and at least 12 species of whales and dolphins.

Or, put another way… Kimbe Bay has almost double the marine biodiversity of the Red Sea. And is considered to be the hard coral capital of the world!

New Britain island is part of the Bismarck Archipelago, which forms the southern ridge of the “Ring of Fire”. The volatile, horseshoe shaped seismic strip of ocean trenches and volcanic arcs that wreaks periodic havoc around the Pacific Ocean basin.

The archipelago was formed over 8 million years ago. As a result of what geologists refer to, rather prosaically, as “tectonic uplift”. And the flight from Port Moresby to Kimbe’s Hoskins Airport puts that whole concept into a slightly more dramatic perspective.

As you cross the narrow Vitiaz Strait from the main island of New Guinea. You will catch your first glimpse of New Britain – the western tip of a narrow crescent-shaped island. Roughly 500 km long, by about 30 km wide at its narrowest point and 150 km at its widest.

Running along the spine of the island are huge mountain ranges. So high they effectively isolate the north coast from the south and create their own weather patterns. So that while the north follows the normal monsoonal seasons the south is completely opposite.

The mountains also create a partial rain shadow over the north. Making the south coast the second wettest place on earth, with annual rainfalls of 6-8m…

The approach into Hoskins Airport takes you over the Willaumez Peninsular, the western boundary of Kimbe Bay. Which provides a spectacular introduction to the other visually defining feature of this part of New Britain – volcanoes… On the tip of the peninsular are two large freshwater lakes. Occupying the huge caldera left by the massive eruption of the Dakataua volcano over a thousand years ago. And then dotted along the long and narrow isthmus are three smaller volcanoes.

The final approach into Hoskins is overshadowed by the large Mount Pago volcano and its two smaller siblings. Whose periodic rumblings provide very poignant reminders of the powerful seismic phenomena far underground that created those tectonic uplifts.

Bounded by the long Willaumez Peninsular to the west and Cape Tokoro, 140km to the east. Kimbe Bay is sheltered from the worst of New Britain’s weather.

Along the coastal area of the bay a 200m shelf runs parallel to the shore for about 5km. Before dropping down to depths of 500-1000m. Then as the northern edge of the bay approaches the Bismarck Sea, the seafloor drops off rapidly to in excess of 2000m.

Across this deep seascape are dramatic seamounts. Together with coral pinnacles that rise up towards the surface and provide isolated ecosystems for the marine creatures of the bay.

The seamounts in particular act as beacons to the bay’s prolific pelagics and marine mammals. With twelve species of mammal’s identified to date, including sperm whales, orcas, spinner dolphins and dugong! 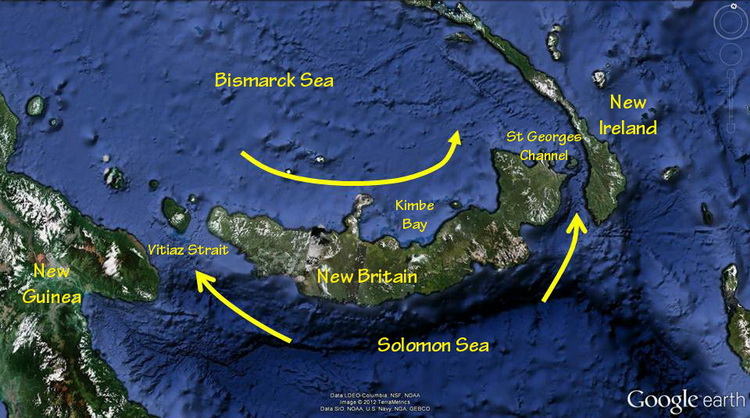 The deep waters and generally benign conditions function as a kind of marine nursery. Which are fundamental to the incredible biodiversity of Kimbe Bay.

But the other significant element are the currents of the Bismarck and Solomon Seas. Which provide the nutrients to sustain the bay’s residents and visitors.

In a nutshell… The forces of nature have combined to produce an almost perfect natural environment.

One that has create and then sustained the coral crucible and the creatures that cohabit with it.

Kimbe Bay enjoys a stellar reputation among travelling divers and underwater photographers for its incredible biodiversity and offers some really special diving. But it’s not a shark-lovers paradise or somewhere you go because large mammals and pelagics aggregate at certain times of the year.

Rather, it’s a bit like diving in a massive, fully stocked aquarium. One that has a significant random factor of nature, in that you never know what is going to come in from the blue!

All the dive sites that are visited regularly have their specific features and special things to see. But there are far too many to describe, so let me wax lyrically about my favorite reef and seamount dives…

With about 40 to choose from, Kimbe offers an incredible array of reef diving. Most are patch-type reefs that grow on the ridges and platforms that rise up from the depths on the western side of the bay. While on the narrow shelf that runs around the coastline of the bay there are a number of classic fringing reefs.

The common denominators across all those reefs are the rich proliferation of hard corals and the very photogenic, intensely red sea whips.

If one site can be said to have it all, it would probably be South Emma with its huge colorful barrel sponges, beautiful red sea whip gorgonians, stunning soft coral and a deep swim-through cave are just a few of the many attractions!

Plus, on most dives, a school of barracuda will be circling the bommie, together with curious batfish and numerous trevallies. And… gray reef sharks commonly patrol the southern side of the reef, while the deep surrounding waters on the western side of Kimbe Bay mean there is always a good chance of pelagic encounters!

The top of the bommie is in 12-15m of water and is covered in a rich growth of hard and soft corals, teaming with numerous species of butterflyfish, together with fire, elegant and two-tone dartfish, twin spot goby, scribbled leatherjacket, tiger blenny, longnose hawkfish and clown anemonefish…

Located on the western side of Kimbe Bay on a large platform that rises up from the deep, the main part of Vanessa’s is a long ridge that connects to the nearby large reef flat. Most of that ridge is in between 18-22m in depth. Making Vanessa’s an easy and very pleasant dive with lots of time to explore. And there is much to see…

Starting with the area near where the ridge rises up towards the reef flat and the dense colony of large and very well nourished gorgonian sea fans, which make excellent photographic subject matter. But look closer and you will find hawk fish, commensal shrimp and many other subjects that will keep macro shooters very happy.

Further out on the ridge is an equally rich sponge garden, with multiple huge elephant ear sponges, bright red barrel sponges and vivid orange sponge mounds. Many of which are adorned with multi-colored crinoids feeding in the currents.

At the end of the ridge, near the permanent mooring is a roughly circular area with more fans and sponges. While, to the north, is a deep sandy patch at 32m which leads to a narrow ridge. Which has another dense thicket of gorgonian fans, elephant ear sponges and beautiful Kimbe Bay sea whips.

Of the three seamounts dived regularly in Kimbe Bay, Bradford Shoals is considered to be the most exciting, exhilarating and, from time to time, challenging dives in Kimbe Bay.

That random factor is highest on the seamount dives. Because they are isolated from the reef systems and, rising up from the depths, they naturally attract pelagics and large mammals that have entered the bay.

Located on the very edge of the bay and rising up from the seafloor some 1500m below. Bradford Shoals is the closest seamount to the Bismarck Sea and the logical first port of call for those open-water visitors…

The top of the seamount is at 20m where the reef structure is mainly flat plates of hard coral. Which is home to numerous colorful small reef fish. But very few divers go to Bradford Shoals to see reef fish, because the main attraction is what is above the reef…

On any given day you are almost certain to see large schools of barracuda, big-eye trevally, dog tooth tuna, unicorn fish and fusiliers.

Plus, skittish white-tip reef sharks on the top of the reef. Cruising gray reef sharks out in the current and the possibility of a great hammerhead on a foray up from the deep.

The schooling barracuda are a permanent feature of all three Kimbe seamounts. But the sheer size of the school at Bradford Shoals and their acceptance of divers makes the whole experience really quite exceptional!

No article on diving Kimbe Bay would be complete without a mention of the excellent wreck of a WWII Mitsubishi Zero.

Discovered by a local villager while free diving for sea cucumbers. The Zero is in quite remarkable condition despite its six decades underwater! There are no signs of bullet holes or combat damage to indicate that the plane had been shot down.

Instead, the ‘off’ position of the throttle lever and the pitch control set to reduce air speed. Clearly pointed to a controlled crash landing and in all probability the pilot had got lost and ran out of fuel. A relatively common occurrence during the New Guinea campaign.

In just 17m of water the Zero is an excellent and very photogenic dive!

How to Dive Kimbe Bay

There are two really excellent options to experience what Kimbe Bay has to offer. You can either base yourself at Walindi Plantation Resort and use the resort’s day boats that leave for 2-3 dives every morning at 08.00.

Or you can get a flavor of it all on one of the two liveaboards. Both MV Oceania and MV Febrina are based from Walindi. As they always include dives on the bay’s signature sites at the beginning and end of each trip.

Day diving will obviously allow you to experience more of the sites. And it’s worth doing the three-dive day, with lunch on the boat. As you can really get to a great selection of the best sites over a few days.

Interestingly I have found that the signature sites have a quite different flavor when dived from one of the liveaboards. Because you are usually in the water at different times than the day boats…

Kimbe Bay is a truly exceptional location that is visually spectacular both above and below the water. Its biodiversity is stunning, the dive sites are excellent and the overall experience is truly first-class.

In a country that has so many great locations Kimbe Bay is truly exceptional. As Charlie Veron himself said “I am hard pressed to think of anywhere on Earth that has this combination of vibrant health, diversity and beauty.”

Scuba Diver ANZ have published a five-page article of mine on Diving Kimbe Bay in PNG and you can use the link download a copy. 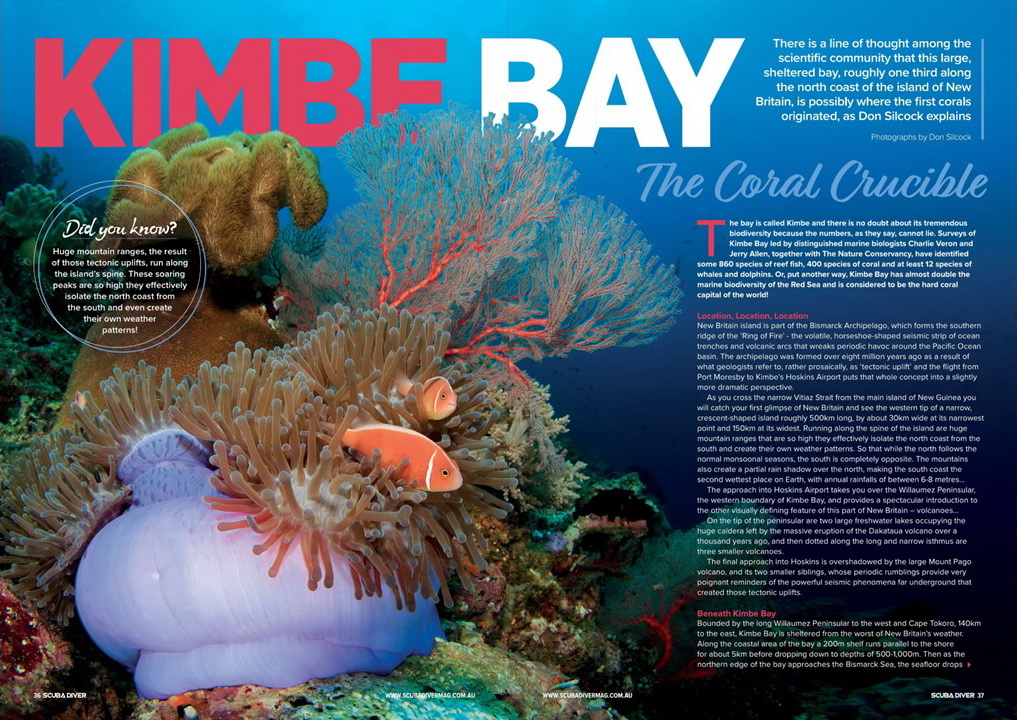