The Giant Japanese Salamander is a quite unique, if rather mysterious, creature that lives in rivers across western and south-western Japan.

As endemic species of Japan that is protected under federal legislation. It is formally nominated as a special natural monument because of its cultural and educational significance.

The giant Japanese salamander is indeed quite large – reaching up to 1.5m in length and 25kg in weight. Which, together with its large mouth and rather strange features gives it a quite formidable presence.

They possess an amazing ability to burrow down in to the rocks of the river beds. Something they do head-first. And given their overall size really does make you wonder how they turn around down there. Because when they do re-emerge they are head-first…

They are nocturnal creatures. And because they lose their gills when they are very young, they must interrupt their daytime slumbers to obtain air. Something they do by either rising to the surface to breath. Or, in highly oxygenated rapidly flowing water, they can absorb it through their skin.

Being in the water with these creatures is an interesting experience. But it is one that involves quite long periods of inactivity. Because while they slumber down in the river bed rocks, you must wait patiently on the surface…

Photographing the giant Japanese salamander can be a rather challenging. Because being nocturnal creatures, they are quite timid during the daylight hours.

They are also very well camouflaged. Their brown and black mottled skin allows them to blend in extremely well against the river bottom. Plus, they spend a significant amount of time burrowed in to the river bed. So you must actually know where to look for them in the first place – which means a guide is essential!

Their small eyes, poor vision and nocturnal nature means that they are very sensitive to light. So there is no way to use strobe lighting without harming them and natural light is the only option.

And, being quite large animals, a wide-angle lens is the way to go. I personally used the versatile Tokina 10-17mm lens with my Nikon D500 and Nauticam housing.

Mid-water shots of the salamanders are the most interesting. But you have to be quick, as they do not linger…

They need to take air about every 30 minutes. And so the cycle I got in to during the time I spent with the salamanders was roughly 25 minutes of rock-watching. Followed by a few minutes of cautious movement as they first start to emerge from the river bed. Then about a minute of hurried activity when they rise to the surface. Take their air and return from where they came!

If you are patient and have a touch of luck you may encounter one of the salamanders out in the open. If you do, then all of your stalking skills will be required to approach them. Taking your time can get you close enough for some nice close-ups of these most interesting creatures!

Where to see the Giant Japanese Salamander?

The first thing you will need if you want to see a giant Japanese salamander is a guide. Because without one your chances are almost zero… Not only that, they live in rivers in rural Japan where almost nobody speaks any English. Or any other language come to that and so you need a Japanese guide!

For my trip I was very fortunate to be helped by my diving buddy Martin. Who lives in Tokyo and is fluent in Japanese having grown up with an American father and a Japanese mother. Martin put me in touch with Yoshihiro Ito, who is the Japanese “salamander whisperer”. He is also one of the nicest people you could hope to meet!

Ito san turned a life-long obsession with the wildlife of Japan in to his full-time occupation. Giving up a good job as a sales manager in the process!

You will need to get to the city of Gifu, the capital of Gifu Prefecture in the Chūbu region of central Japan. Which requires a journey of about two hours on the excellent Shinkansen bullet train from Shinagawa in downtown Tokyo.

Ito san met us at Gifu station and then drove us up in to the mountains to the small village of Wara. Once kitted up in dry suits he then guided us to the best spots in the river to see the giant Japanese salamander. And so began our routines of rock-watching followed by a few minutes of intense activity as the salamanders came up for air!

It has been on my “to do” list for many years. But as my Japanese is limited to asking for a beer and saying thank you, it was just too hard to do. But traveling with Martin and Ito san made it all happen!

We ate Japanese style in the inn’s dining room with other travelers who were passing through the area and it was just great.

The very best time to see the Japanese giant salamanders is during their mating season in late August. This is when the sexually mature adults migrate up stream into the mountains to spawn and lay their eggs in “dens”.

The larger males guard those dens and are known as “denmasters”. Mating with numerous females during the season, while smaller males will often to sneak in to the dens and fertilize the eggs.

X-Ray dive magazine recently published an extensive 4-page Giant Japanese Salamander article of mine. The article is based on my trip to Japan’s Gifu Prefecture to see and photograph the salamanders.

You can use this link to download the Giant Japanese Salamander article. 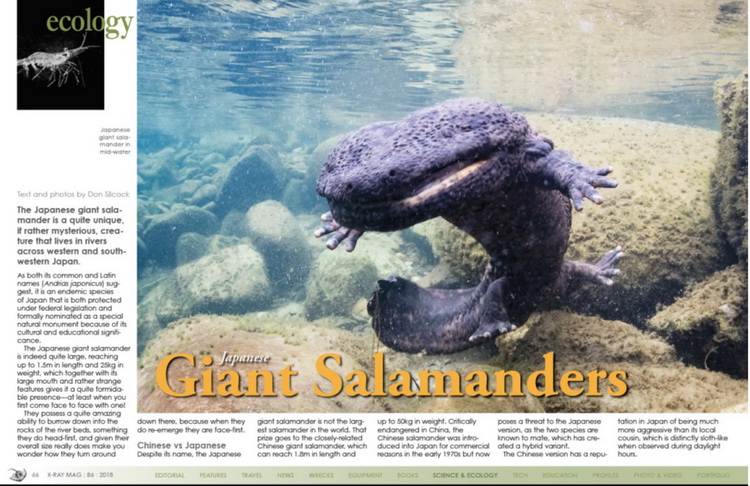 The Japanese giant salamander... This rather strange but quite unique creatures live in rivers across western and south-western Japan. As its common …