The ultimate underwater photography DSLR housing… Underwater housings are basically tools that allow a specific camera to be used underwater. But, to get the most out of that camera the housing needs to be very well designed, robust and allow intuitive use of all the important controls.

My first real housing was the Subal Miniflex N8 for the Nikon F801. Which I bought back in 1989 and for those of you not even alive back then… The F801 was the film camera that launched the overall concept of housing a land camera to use underwater.

The F801 was the Nikon SLR that brought auto-focus to the masses. It was very successful, as it was sized reasonably and had some great functionality for the time.

It was also the camera that the revolutionary Nikonos RS was based on… Nikon’s first auto-focus SLR underwater camera.

The RS was big, very expensive and not as reliable as the earlier and very successful Nikonos “scale-focus” models. Basically, the logic was that an F801 in a small housing was about the same size as the RS. But much cheaper and more reliable.

Plus, you could use a much greater selection of lenses. Rather than the four dedicated and expensive lenses that were released with the RS body.

Back in the 1990’s when housing development really took off the industry leaders were both Austrian – Seacam and Subal. Or as I used to think of them, the one and the two kidney companies. As they seemed so expensive that you were looking at selling some of your organs to buy one of their products!

Seacam was the Rolls Royce of underwater housings (both kidneys). While Subal was a bit cheaper but still expensive – well to me at least!

That said, both were superbly crafted, and I was delighted with my N8 housing. I stayed with Subal for 17 years and owned a total of five housings.

Because, like all housing  manufacturers, once you are in their ecosystem you tend to stay there. It’s typically just too expensive to switch.

But unfortunately they did not make the shipment and, if I wanted to use the D800 on my next trip, I was faced with no choice but to switch housings.

Ultimate Underwater Photography DSLR Housing – and so to Nauticam…

If there were only one thing you could say about Edward Lai, the man behind Nauticam, my pick would be “innovative engineer”. And if there was a second thing, it would be “astute businessman”. Basically, he completely disrupted the underwater housing market. And he did it (in my opinion) in the best possible way – by constantly innovating and improving the Nauticam products and their technology. The way they have researched, tested and then released underwater corrected optics (watch the video) is particularly admirable!

I went with Nauticam for my D800 for two reasons. The housing was in stock and adaptors were available to use my Subal ports.

When… Subal had not even shipped their housings. If you have had any experience of developing and then releasing new products, you will know that was a significant achievement for a new company.

Of course, I needed new zoom rings etc, but they were also available. And although the total was more than the Subal ND800 housing, I was good to go with one consolidated order.

Compared to my Subal housings, the Nauticam NA-D800 seemed less refined and much less tactile. But it worked and I got used to it. Although they are not the “glove-fit” the Subal housings were/are overall – the Nauticam haptics, port locking system, vacuum system and general functionality of the latest housings like the NA-D500 (which I still own) and the NA-D850 are simply excellent.

Once you settle on a housing manufacturer you are unlikely to change. The cost and availability of all the accessories like ports, viewfinders and zoom rings etc generally make it all too expensive. It’s now almost 10 years since I switched to Nauticam and, as such, I am happy in their ecosystem.

I really like the way they continue to innovate in significant ways. But, that said… they are no longer towards the lower end of the price spectrum. And new entrants to the housing market are clearly following their playbook…

Having already invested in what I consider to be the “ultimate” underwater DSLR’s (D500 and D850) I currently have zero intention of changing again.

What I find really impressive about Nauticam is the way they push the envelope with their accessories, particularly the optical ones like the WACP’s (more on that to come) and the EMWL. With high resolution cameras now the norm and really excellent lenses to choose from, the bottleneck to get the most out of that technology are the ports we use.

Nauticam have really been innovative in this area and it is broad-based development that covers both still and video imaging. 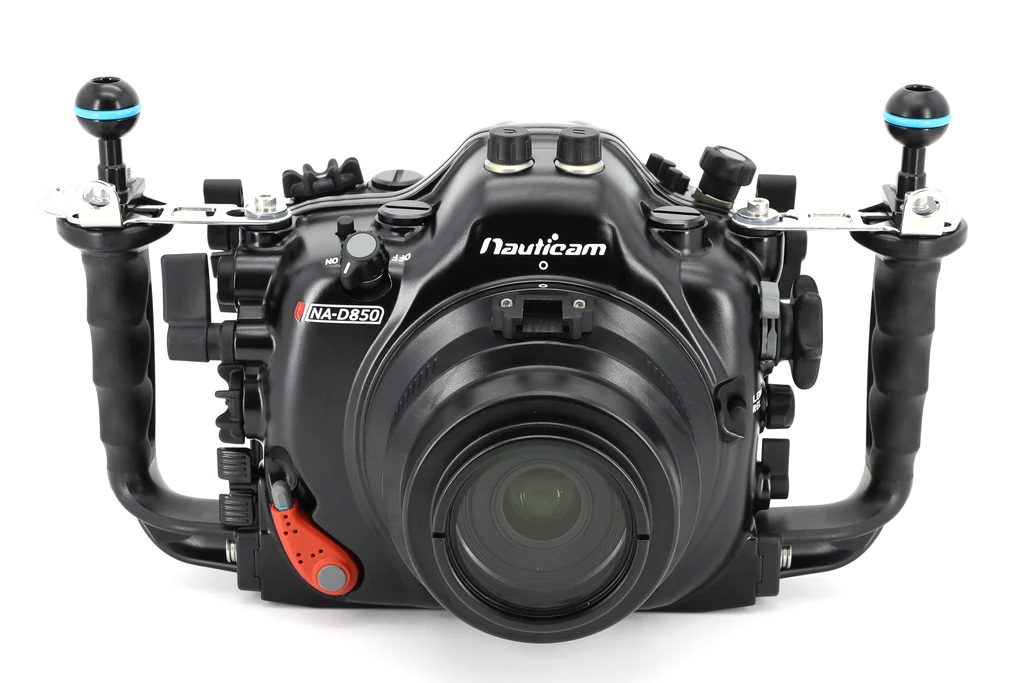 It’s now almost three years since I housed my Nikon D850. And most of that time I was behind the closed international borders of Australia during the pandemic. I did manage to get quite a lot of diving done in Australia. Mainly in the cold temperate waters of South Australia. Then, once the borders opened I have been able to dive the warm waters of Tubbataha in the Philippines and Mexico.

Ease of use when you are in cold water with a dry suit and thick gloves is a key indicator of whether you have the right housing and the NA-D850 performed excellently. Plus, it’s strong, rugged and to date 100% reliable.

The controls are logically laid-out, tactile and allow you to use all the good stuff that the D850 can do. But what has really amazed about the camera has been the sheer quality of the images possible when use with the Nauticam WACP and my OneUW strobes!