The Mitsubishi Zero Wreck – As the story is told around the bar at Walindi, the day the wreck of the Zero fighter was found was soon after a small plane had crashed on take-off from Kimbe Bay’s Hoskins Airport.

So, when local villager William Nui found the plane laying on the sandy sea floor. He thought it was the wreckage of the recent crash… Not that of a WWII Japanese fighter that had remained undisturbed for almost 60 years!

How the wreck was actually found is an interesting story in itself. Because William was free diving for sea cucumbers when he noticed what appeared to be a large shadow on the sea bed.

Like many people in Papua New Guinea, William is very superstitious. And he thought that he was looking at a ghost lying face-up with its arms outstretched…

Terrified, he shot to the surface and the relative safety of his canoe. Eventually summoning enough courage to go back down to take a closer look. Realizing that the large shadow was the wreck of a plane, rather than some demon of the deep.

William reported the discovery to the local authorities and word of the discovery made it to Max Benjamin, the owner of Walindi Plantation Dive Resort. Max was rather dubious but felt that the story should be checked out. And the rest, as they say, is history…

The Mitsubishi Zero fighter was to the Japanese military during WWII what the Spitfires and Hurricanes were to the British.

Or the Grumman F4 Wildcats and F6 Hellcats were to the USA – remarkable fighting machines.

The Zero initially achieved its legendary status because of its role during the infamous Japanese attack on Pearl Harbor.

However it was the plane’s eventual role as the transport of choice for the infamous Kamikaze (Divine Wind) suicide pilots that ingrained the Zero into the psyche of a generation.

More than 3000 volunteer pilots, some as young as 17, gave their lives in what they believed were divine missions to protect Japan.

Initially those Kamikaze attacks were quite ad-hoc in nature. 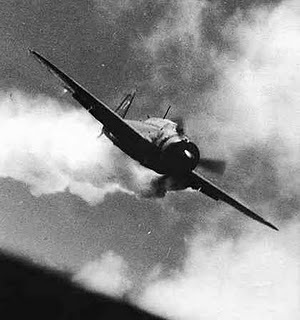 Occurring when Japanese planes were hit during battle and their pilots would deliberately crash into Allied ships in a last, desperate attempt to inflict as much damage as possible.

Then in October 1944 the Japanese Naval Air Force deployed specially modified Zeros in the Battle of  the Leyte Gulf in the Philippines. And the legend of the Kamikaze was truly born!

It was a devastating and truly demoralizing strategy.

By the end of WWII a total of 49 Allied ships had been sunk by Kamikaze attacks.

The Mitsubishi Zero Wreck – The History

When Max Benjamin first dived the Mitsubishi Zero wreck, he found it in quite remarkable condition. Particularly so considering it had been underwater for almost 60 years at that point in time.

There were no signs of bullet holes or other combat damage indicating the plane had been shot down. Plus, the throttle lever was in the “Off” position and the pitch control set to reduce air speed. Which all pointed to a controlled landing.

The probability being that the pilot and ran out of fuel, which was a relatively common occurrence as WWII progressed. With Japanese records showing that in 1942 only 10 Zero pilots had been shot down in air combat. While 16 had disappeared due to ‘unknown causes’.

Max and his wife Cecilie are both very knowledgeable about the history of WWII in PNG.

And were fascinated by the newly found wreck in their backyard…

So they tried to piece together the history of the plane. Using a combination of factual Japanese military war time records and anecdotal stories from local villagers.

The aircraft’s serial number and date were still visible on the wreck. And military records showed that the plane went missing during the battle of Cape Gloucester in West New Britain on the 27th December 1943.

The Mitsubishi Zero Wreck – The Pilot

The pilot on that day was Tomiharu Honda. And while his fate remains somewhat of a mystery, there can be no doubt about his flying skills.

Cecilie Benjamin firmly believes that Honda made a very deliberate choice as to where to ditch the Zero. Because the wreck’s location is a straight line across Kimbe Bay from the Japanese built airstrip at Hoskins, So Honda would probably have flown over the area many times.

If, as is most likely Honda was low on fuel, he would have wanted to get the Zero back to Hoskins. But that would have meant risking running out of fuel completely and ditching in the middle of Kimbe Bay.

Given that only about 20% of ditchings were successful, together with the sheer size and remoteness of Kimbe Bay. Honda would have known the chances of survival were very low.

So, instead he chose the protected area close to shore. And the quality of the landing and the condition of the plane clearly indicates that he was an excellent pilot! Local legend has it that nearby villagers helped Honda return to Japanese territory. But what happened after that remains a mystery and whether he actually rejoined his comrades is not known.

With alternate stories indicating that he spent the rest of his life in the jungles of New Britain. While another, more gruesome theory is that he ended up as the main course of a ceremonial feast for a head-hunting tribe – a practice still common in those days….

The Mitsubishi Zero wreck is located towards the northern end of the Willaumez Peninsular. Which affords much of Kimbe Bay it’s protection from the elements.

Physically the wreck is in a small bay close to the popular South Emma’s dive site.

Laying in just 17m of water the wreck is easily dived, and bottom time is not a big issue. Although its location close to the shore means that you need several dry days to see it at its best, as run-off can make the visibility fairly limited.

The plane sits serenely on the sandy bottom and is covered with a light marine growth with numerous small barnacle-like hard coral growth on the wings and fuselage. The three blades of the single propeller are still very much intact and have a rich covering of sponges and some colourful coral.

The fish life is concentrated around the open cockpit which hosts a large anemone and a small colony of nemos just behind the pilot’s seat.

The total length of the fuselage is just less than 10m and the tip to tip wingspan is 12m, so it’s not a particularly big wreck.

The Zero is dived regularly by Walindi’s day boats and the resort’s liveaboard’s Febrina and Oceania also visit the wreck from time to time.

The Australian magazine recently published an article of mine on the Zero wreck and you can use the following link to download the Mitsubishi Zero Wreck article.

Milne Bay – Where It All Began
Next Post: Best Aircraft Wrecks in PNG