Open boat whaling in the Azores is something I thought that I could never come to terms with or understand. But then I had never been to the Azores before. And I certainly had no idea about the people who live there and their culture.

I went to the Azores for purely selfish reasons – I wanted to photograph  sperm whales. And the islands are one of the few places in the world where you can do that in-water. Albeit under a special permit…

The islands of the Azores are simply spectacular and Pico Island where I spent my three weeks is stunning.

The main town of Madalena was a small but very pleasant place and the local people were welcoming and friendly. But it was very obvious their culture was deeply ingrained and they were proud of their heritage.

Obviously I knew that whaling had been a major industry there, but I had no real concept of what was actually involved. I was just personally appalled at the thought of it all…

Open Boat Whaling in the Azores: The Museum

Then on a bad weather day, when strong winds kept us on dry land, I went for a drive around the island. In the south of Pico is the town of Lajes and near the waterfront is the Museu dos Baleeiros – the Whalers’ Museum.

The whole thing is nicely laid out in a restored heritage building. And it was initially quite impressive with it’s collection of memorabilia and restored wooden whaling boats…

But in the next room were hung a collection of old photographs from the whaling days that were simply sickening. They showed the carcasses of sperm whales being hauled up out of the sea and then being rendered. Because they are such magnificent and intelligent mammals and have such strong bonds with their infants, we humans seem to be associate ourselves closely with them.

We regard them as much more than an animal. Seeing them slaughtered in such a way made me feel physically sick. So I left the museum and on the way out I was asked by the receptionist if I had enjoyed my visit. I think my expression told her all she needed to know…

Open Boat Whaling in the Azores: Pen to Paper…

I wanted to write an article about my experience in the Azores. But it was very clear to me that there was a lot that I did not know about the island, its people and its animals… So I started to research all that. And as I did I started to realise why their culture is so important to the people of the Azores.

In these days of increasing globalisation we are all starting to blend together… Our cultures are what defines us and makes us who we are. A strong culture is something to respect – even when elements of it seem appalling at first sight.

Open Boat Whaling in the Azores: The History

The people of the Azores are known for their quiet, peaceful but industrious nature. It was those characteristics that struck the captains of the American whaling ships that visited the islands at the end of the 18th century. Those ships were in many ways the precursors of the infamous “factory ships” of the early 20th century that so devastated the global whale population.

They were highly evolved vessels that could catch whales, using small open boats launched from the main ship. And then process the whales using an on-board brick furnace called a “try works” to boil the blubber. They were designed to pursue the deep-water whales out in the open ocean. And they specifically targeted the sperm whale because of its highly-prized oil, which was lighter and purer than in other whales.

Many Azorean men signed on with the American ships. Quickly earning strong reputations as good “whalemen” who excelled as lookouts, boatmen and harpooners. Plus they did not complain about the low pay, poor conditions and extended trips that often stretched out 2-3 years at sea!

In the second half of the 19th century the American whaling industry went in to steady decline. The whalemen of the Azores brought their acquired skills home and established land-based whaling in their own islands. With the first known whalery being built on the island of Faial in the 1850’s.

By the early 1900’s Azorean whaling was well established. At its peak in the 1940’s and early 1950’s there were 21 whaling stations in operation. And the only concessions to modern technology was the introduction of motor tow boats in the early 1900’s. Which enabled their open boats  to get out to the whales much quicker. But the hunt itself was conducted by oar power…

Secondly radio telephones were introduced in the 1940’s. Which allowed direct communication between the whale boats and the spotter up in their cliff-side vigias.

Open Boat Whaling in the Azores: The People

The islands of the Azores are a long way from everywhere. And, although discovered in the 14th century, it was nearly a century later before the first settlers arrived. Bringing with them everything they needed to survive, while they built houses and cleared land to plant the crops that would sustain them.

That toughness and resilience was the first thing that struck me about the people of the Azores. And, no matter how appalling whaling is, the men of the Azores took to the open sea in small boats to catch and kill by hand such huge creatures is an amazing story. Sperm whales are not docile animals – they have been known to attack and sink large wooden boats.

While I hate the very thought of what they did, I cannot but admire their courage in doing it! 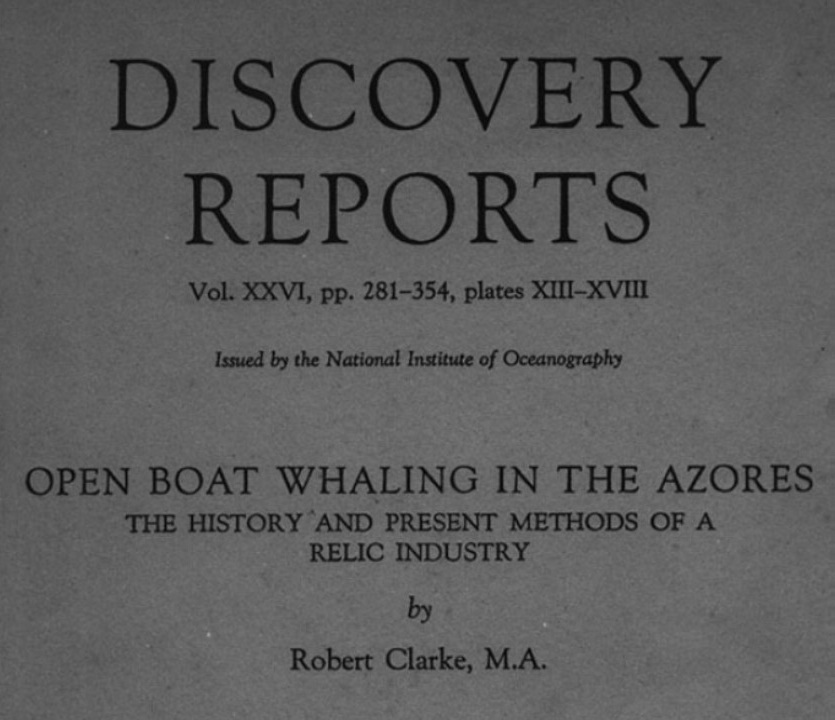 One of the most interesting things I stumbled on while I researched the Azores was the work of Dr. Robert Clarke.

Clarke was a British marine biologist who spent 10 weeks in the summer of 1949 assessing the sperm whaling industry in the Azores.

His Discovery Report Open Boat Whaling in the Azores is excellent and makes fascinating, but somewhat harrowing reading. It really puts the whole thing in to a clear historical perspective.

The report is very well researched and written in an interesting way. It provides a unique vignette in to the Azores in 1949. A time when whaling was the main and only industry on the archipelago, aside from traditional farming and wine-making.

The report is quite long at 92 pages… But some 20 of those are photographs Clarke took while he was in the Azores and some data tables.

Although copyrighted, the report is available to download from several sources on the internet so I have out a copy here.

Then there is the short film made in 1969 by William Neufeld called The Last Whalers which is available on Vimeo. Although dated in format, provides an overall vignette in to whaling in the Azores that was to me both horrific and heroic.

I have always viewed whaling as a greedy and evil thing. I still do… but seeing it from the perspective of the Azoreans, who were basically doing what they had to do in the only non-agricultural industry there was at that time allowed me to personally come to terms with what happened to the sperm whales of the Azores.

Overlay on that the many religious festivals, patron saint and traditional holidays that are integral to the archipelago. Which are the islander’s way of keeping their culture strong and alive, while offering thanks to their gods, and it is easy to understand why the Azores are indeed a very special place!