Tofo Megafauna – On the southeastern seaboard of Africa, along a 200km stretch of the Mozambique coastline.  Mother Nature has conspired to create what can only really be described as a perfect underwater biological storm.

For it is in this remote area that several major African and Indian Ocean currents converge. Producing some unique counter-cyclic eddies that suck up rich nutrients from the deep trenches to the south. Creating huge quantities of zooplankton – the life source of oceanic mega fauna.

This unique mechanism has been occurring largely unnoticed for thousands of years. Playing a major role in the evolution of two creatures at the tip of the mega fauna food chain – the whale shark and the manta ray.

The area, is centered around Tofo in the southern Mozambique province of Inhambane. It is host to some 20% of the world’s population of whale sharks. And an estimated 1400 individual manta rays, one of the largest populations of manta rays identified anywhere in the world.

Ironically it was one of the scourges of Africa – tribal warfare, which descended into the protracted and very bloody Mozambique civil war, that kept this unique natural phenomenon largely hidden from the world.

Times have changed and peace has returned to Mozambique. As a result though other threats are now having a significant impact on this unique marine mega fauna aggregation, which threaten its very survival.

Aggregations of marine creatures happen when a combination of natural circumstances occurs. And create the ideal conditions for large groups of fish or mammals to gather at a specific geographical location.

While other aggregations are still to be discovered… But virtually all aggregations have a common denominator, with seasonal influences creating the pre-conditions for the animals to gather.

In other words the aggregation happens once, or maybe twice a year, and for a limited time only.

The aggregating animals are basically “hard-wired” to make their way to the location as they sense those pre-conditions developing. For example, at Ningaloo Reef in northwestern Australia, some 7-9 days after the March or April full moon is a massive coral spawning. Which attracts large numbers of whale sharks that stay in the area for 2-3 months to feed on the resultant zooplankton.

However in southern Mozambique those unique counter-cyclic eddies produce a rich year-round source of zooplankton. Which is concentrated in a 200km stretch of coastline from Zavora in the south to Pomene in the north. And the reliable availability of such a rich food source makes this coastal corridor an extremely important one to marine mega fauna. 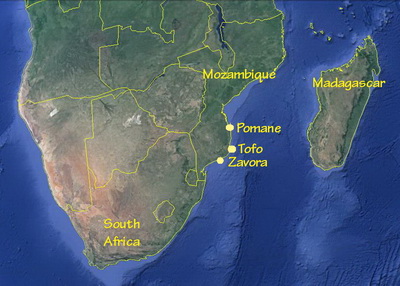 The small beach-side village of Tofo is the main center for dive tourism in southern Mozambique.

Located in a picturesque bay about 16km from the regional center of Inhambane city. Tofo has experienced unprecedented growth as the tourists numbers have increased.

There are now several dive centers, numerous guesthouses and small hotels in Tofo.

For more information on Tofo, how to get there and where to stay check out the What You Need to Know About Tofo page 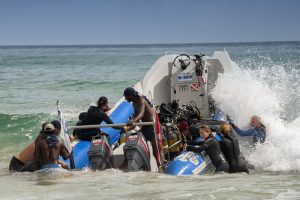