Diving the Fathers Reefs and Lolobau Island… In a roughly rectangular area that is about one-third the size of Tasmania. The north coast of New Britain hosts three of the best diving locations in all of Papua New Guinea.

The most well-known of those three is incredible Kimbe Bay. While to the north-west of Kimbe are the wonderful Witu Islands. And last, but not least, to the north-east is Lolobau Island and the Fathers Reefs.

I have been fortunate to dive all three locations over the last 12 months or so. And the purpose of this article is to document my experiences at Lolobau and the Fathers. 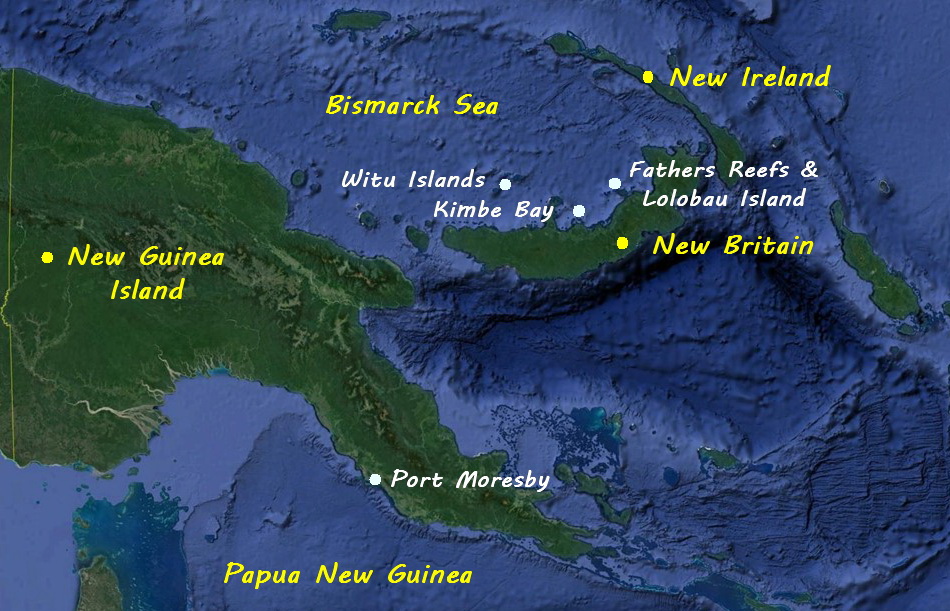 New Britain is the largest of PNG’s many islands and it sits about 5 degrees south of the Equator. Astride the south-western leg of the Pacific Ring of Fire – where the world’s tectonic plates collide.

Such collisions result in “subductions”, where one plate is forced under the other. Producing volcanoes, mountain ranges and earthquakes in the process…

Kimbe Bay itself is bounded by some seven significant volcanoes. Plus the huge Dakataua caldera at the northern tip of the Willaumez Peninsula. While the epicenter of the Witu Islands is the huge caldera on Garove Island.

And Lolobau is dominated the large volcano on the western rim of the 6km wide caldera that forms the island. While in the distance, on the coast of New Britain, is the massive 2300m high Ulawun (Father) volcano.

You probably get the picture… there is some pretty amazing scenery along the north coast. Which is both visually spectacular and a constant reminder of the powerful ancient forces deep beneath in the earth’s core.

Beneath the water at Lolobau and the Fathers the scenery is equally impressive. With the diving focused on the seamounts and coral topped pinnacles that rise up from the depths of the Bismarck Sea.

Physically the area is located at the north-eastern tip of greater Kimbe Bay. And, like the Witu Islands, is directly exposed to the nutrient-rich currents that circulate the Bismarck Sea.

Which means those seamounts and pinnacles are very well-nourished. And able to sustain their own eco-systems – all of which means some really excellent diving!

There are numerous sites to pick from in the overall area and some 14-16 of them are dived regularly.

Here are some of my favorites sites from the diving I did at the Fathers Reefs and Lolobau Island: 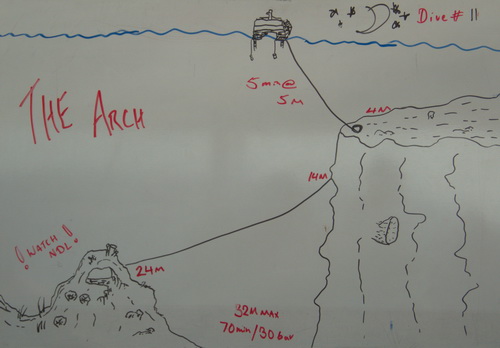 The Arch: Located at the western edge of the Fathers Reefs, this is for me the signature dive of the area…

It consists of a large bommie that rises up from a deep shelf in 50m+, with its top in 24m. So it is a potentially deep dive.

There is a permanent mooring on a nearby shallow reef. The bommie is accessed via a rope attached to the side of the reef, which leads down to it.

The rope ensures that you can easily find the bommie. Plus makes is easy to deal with any current so that you can maximize your dive time on the site.

The highlights of the Arch are the large oval window in the bommie and the arrays of beautiful sponges, soft corals and red sea-whips that add such dramatic color to the site.

All told, the Arch is an adventurous and exciting dive that will stay in your memory for a long time to come! 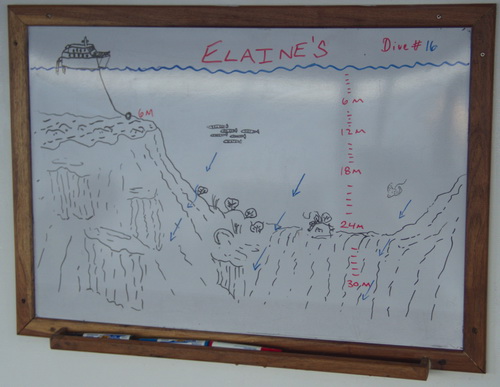 Elaine’s Reef: Also located at the western edge of the Fathers and close to the Arch.

The site is a joy to dive and offers wide-angle photographers a great selection of subject matter!

Elaine’s has rich patches of superb and vibrant soft corals and sponges. Together with beautiful patches of photogenic red sea-whips typical of this part of Papua New Guinea.

And… a huge resident school of barracuda!

The site is basically a ridge between two reefs, with the permanent mooring on the top of Elaine’s Reef in just 6m. From the reef flat the ridge drops down to about 24m and on the way down there are numerous patches of intense marine growth.

Along the ridge itself and either side of it are more examples of just how rich those Bismarck Sea currents really are. While in the blue above the ridge the barracuda perform their synchronized swimming routine to the delight of their brief visitors! 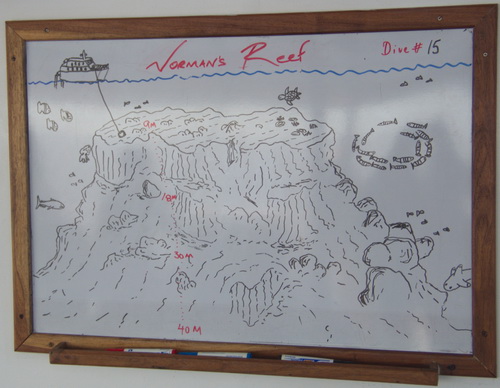 Norman’s:  This site is a quite spectacular large, roughly round, seamount. Which rises up almost vertically from the deep seabed some 40m+ below.

The top of the seamount is a flat plateau in about 9m.

And is richly covered in marine growth and hosts a large population of small to medium size creatures like nudi’s, cuttlefish and moray eels plus lots of small reef fish.

During the day Norman’s is a great wide-angle dive. With schooling jacks and barracuda in the blue. And lots of sponges, corals and sea-whips around the sides of the seamount.

But at night it really comes alive as all the smaller stuff emerges to feed!

Not sure quite why Norman’s is so prolific at night, but of the several night dives on the trip by far it was the best!

Whatever it is, make sure you do a night dive at Norman’s if you get the chance! 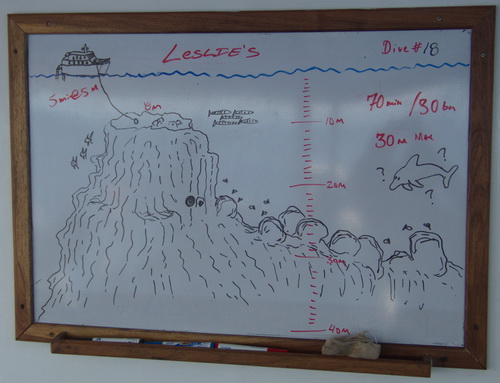 Leslie’s: Located close to Norman’s along the northern edge of the fathers Reefs is this site which is another seamount rising up from the depths.

The main part of the seamount is a smallish and roughly circular pinnacle that comes up to 8m below the surface. Which is where the permanent mooring is situated.

Schooling barracudas are a permanent fixture at Leslie’s.

And the site is known for regular visits by large silvertip sharks, but they failed to show up the days we dived it – such is life in the ocean…

To one side of the pinnacle is a ridge that starts at around 24m and runs down to about 35m, which is host to lots of colorful soft corals and barrel sponges. It is also the area where the silvertips like to hang out when they show up!

So, we just had to make do with some excellent encounters with the very photogenic schools of barracuda and jacks…

The Fathers Reefs and Lolobau Island – In Conclusion

Diving Lolobau Island and the Fathers Reefs have very much been on my bucket list for a few years and it was a real pleasure to finally get there.

Did they meet my expectations? Absolutely – the diving was excellent, and the above water scenery was spectacular!

So… having dived extensively in Kimbe Bay and completed trips to both the Witu Islands and the Fathers in less than 12 months. I am sure you are probably curious as to which area I prefer?

Which is a really tough question as all three areas offer great experiences. And I cannot really say one is better that the other, what I would say though is this:

Kimbe Bay is a great all-round experience! And if you prefer to sleep on dry-land then it makes the most sense… As you can do up to three dives a day in the bay and be back at Walindi Resort in time for a sundowner and dinner.

Both the Witus and the Fathers have exceptional “open water” seamounts and pinnacles. Which are incredibly hard to beat, thriving as they are on those nutrient rich Bismarck Sea currents. The only way to dive those sites though is by liveaboard…

All three locations have unbelievably scenic locations that will blow your socks off. So basically you cannot go wrong with anyone of them. If, perhaps you are looking for the perfect New Britain trip, then I would suggest a few days in Kimbe Bay at Walindi and then either (or both) the Fathers or the Witus.

I doubt you would ever be able to do that perfect trip better or cheaper than in the next 12 months as Papua New Guinea gets back on its feet after Covid-19!

This article was also published in the monthly on-line Australian diving magazine DiveLog. And if you would like a PDF copy of that, please use the following link to download Diving the Fathers Reefs and Lolobau Islands article. 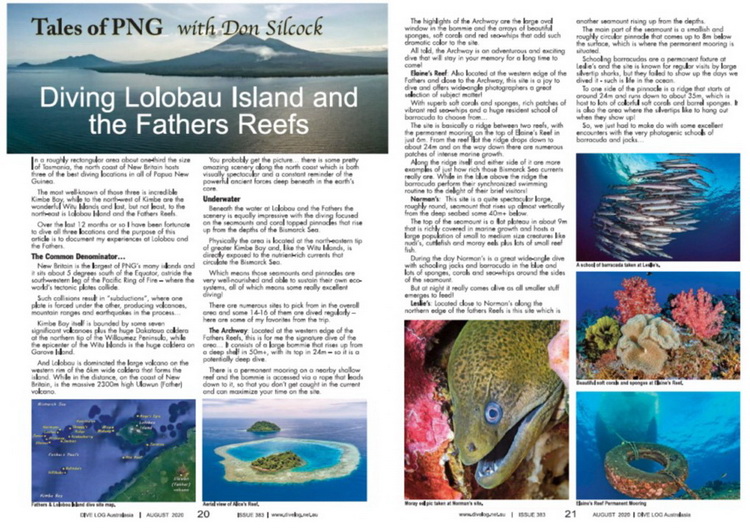 Back To: The Complete Guide to Diving New Britain

New Britain Diving... This wide, crescent-shaped island is the largest of Papua New Guinea's many islands. Roughly the same size as Taiwan, …

The Witu Islands... There are two things that strike you when you arrive at the Witus – firstly they are an incredibly scenic part of the world. The …

Diving the Fathers Reefs and Lolobau Island... In a roughly rectangular area that is about one-third the size of Tasmania. The north coast of New …

Diving Rabaul... Once upon a time the town of Rabaul had almost everything a diver could possibly want. With the visually spectacular Simpson Harbor …