Tufi WWII PT Boat Wrecks… At the end of 1942, the Allied campaign to defeat the Japanese invasion of PNG was focused on the beachheads of Buna, Sananda and Gona.

Roughly halfway up the north-east coast of the main island of New Guinea.

The battle of Buna-Gona ultimately succeeded in defeating the Japanese. But at a very high cost in American and Australian casualties.

Tufi Fjord played a small role in this campaign… When it was selected by the US Navy as an advanced base for the PT Boats that were supporting the campaign.

PT, or Patrol Torpedo, boats were small, fast and highly mobile vessels that were developed by the US Navy in WWII.

They were designed to attack and sink the enemy’s major capital ships. Using their speed and maneuverability to get close enough to launch on-board torpedoes.

PT boats were particularly effective when pitted against similarly sized enemy vessels. Such as the armored Japanese barges used to ferry troops and equipment.

Tufi Fjord offered an excellent location for the boats to operate from. The site chosen was the small bay where the government station jetty had been built. This provided good cover from enemy planes plus an area to store gasoline. Together with a supply of fresh water from the nearby small waterfall.

From Tufi Fjord the PT boats operated regular patrols all the way up to Buna. Plus, on occasions, further north into the Huon Gulf. They were credited with the sinking of one Japanese submarine and at least 18 armored barges.

The Sinking of the Tufi WWII PT Boat Wrecks

The most common urban myth associated with the sinking of PT Boats 67 and 119 was that they were attacked by Japanese fighters while at anchor in Tufi Fiord. But according to “At Close Quarters” by Robert Bulkley, the authoritative history of PT Boat service in WWII, the actual story is that they sunk as a result of an accident during refueling…

The accident happened on the afternoon of the 17th March 1943. When a refueling operation at Tufi Jetty had just been completed and a sheet of flames erupted between the two boats. The fire spread so rapidly that the boat crews had no option but to dive into the fiord to escape the imminent explosion of the on-board gas tanks and stored ammunition.

The fire and subsequent explosion sank both the boats. Plus the AS16 – a small Australian cargo ship, which was moored behind the two PT Boats while its cargo of supplies for the base was being unloaded. The flames also spread quickly to the dock plus the nearby gasoline and ammunition stores. Resulting in further major explosions and fires, which burned well into the next day.

The actual report of the accident by the advanced base commander M. C. Mumma Jr, describes what happened that night: 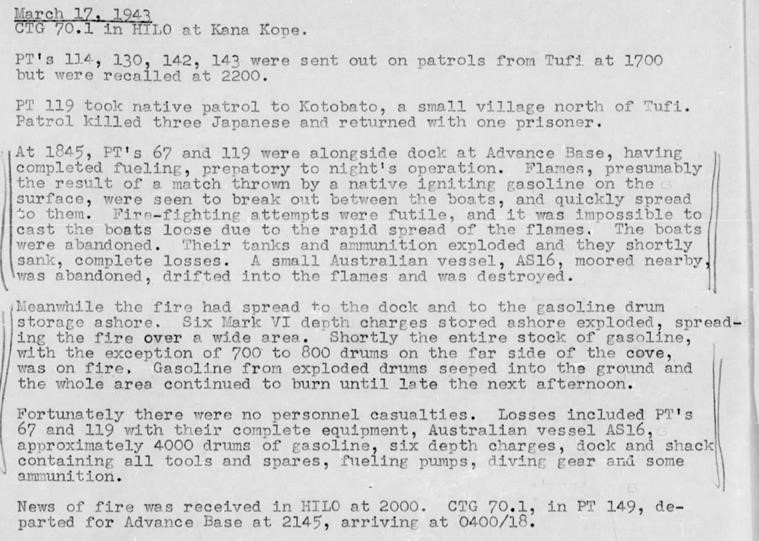 Diving the PT Boats is a very straightforward exercise. Because the former fishing boat that is moored in the fjord, is anchored right above them. So it is simply a matter of descending the mooring line… 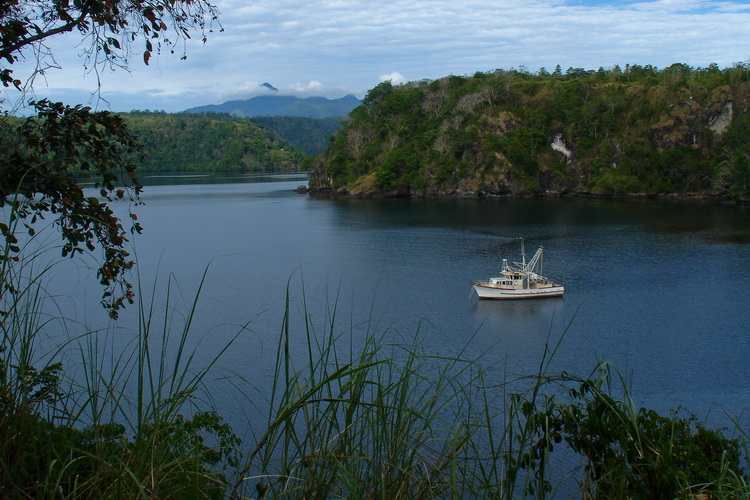 Entry into the water is from the dive wharf and then it’s about a five minute surface swim.

As you descend down the mooring line, at about 35m you can see the wreckage spread out beneath on the sandy floor of the fjord.

Near to the mooring is one of the original torpedo tubes which is still loaded with a live torpedo.

About 10m away down into the fjord is the hull of one of the boats. The bow of which is still intact and clearly recognizable, as is the mounted machine gun just behind it.

The gun’s mounting rails are lying in the sand. Together with the gearing that allowed it to be turned and aimed. But there is not much left of the rest of the hull… Probably because it was burned in the fire that sunk the boat back in 1943.

Bottom time at this depth is obviously quite limited. But most of the boat wreckage is in a fairly small area. So there is usually enough time to see everything before heading back up the side of the fjord in to shallower water.

On the way you will pass more 45 gallon fuel drums and another torpedo tube. Complete with its loaded torpedo. Then, as you ascend up the sloping sides of the fjord at 35m there is an old Landrover. Which is parked among more wreckage from the PT Boats, including one of the engines.

Despite their depth, the PT Boat wrecks are well worth the effort. Although you won’t spend much time with them they are definitely worth seeing and having in your logbook!

The sloping sides of the fjord means that you can make an easy ascent to the surface. There is lots of stuff to see scattered about from the many years the jetty area has been in service. Once you reach the shallows there is even more to see as you let that nitrogen return to where it came…

Tufi scuba diving offers a pretty special combination of options. Ranging from critter hunting in the accumulated flotsam and jetsam around the main …

The offshore reefs of Tufi are one of the main draw-cards for divers considering visiting this remote, but incredibly scenic part, of Papua New …

The B25 Mitchell Bomber Wreck... Like the ghost from the past that she is the "Pistoff" wreck lays in about 17m of water. Some 200m off the beach near …

Diving Tufi Jetty... House reefs are a bit like next door neighbors. Nearly everybody has one but how much time do you really want to spend with …

Tufi WWII PT Boat Wrecks... At the end of 1942, the Allied campaign to defeat the Japanese invasion of PNG was focused on the beachheads of Buna, …

Diving Tufi Fjords... The deep fjords of Cape Nelson are very much the visually defining feature of this area of Papua New Guinea. They are quite unique …

Tufi Dive Resort... It's hard to imagine a more picturesque setting than the one enjoyed by this resort. As they say in the real estate game - location, …

Oro Province, or the Northern Province as it is often referred to, is located on the north coast of PNG’s main island of New Guinea. It has some of Papua …