Diving the Witu Islands… As they say in the real estate business, location is everything. And it is Papua New Guinea’s physical position, astride the Equator, at the end of what was historically referred to as the Malay Archipelago. That puts it right in the middle of the greatest marine biodiversity on earth – the Coral Triangle.

The country occupies the eastern half of the island of New Guinea (the second largest in the world after Greenland). Plus the many islands of the Bismarck and Louisiade Archipelagos.

And… because it straddles the Equator, PNG is exposed to both the Northern and Southern Equatorial Currents, plus the north-east coast of New Guinea and the Bismarck Sea are touched by the famed Indonesian Throughflow, the largest volume of moving water in the world!

Those currents and water flows do two basic things… Deliver the rich nutrients swept up from the deep-water basins to the north and south of PNG. And distribute the eggs and larvae of the area’s marine life.

Simply stated the Coral Triangle, which encompasses the eastern half of Indonesia. Together with East Malaysia (Sabah), the Philippines, Papua New Guinea and the Solomon Islands. Is the richest marine environment in the world.

Scientific studies have identified more than 600 species of coral together with 2000 species of reef fish. And to put those numbers into perspective… The Red Sea has around 200 coral species & 1000 fish species and the Caribbean 50 & 900 respectively.

The Indonesian Throughflow is the life-source of the western part of the Coral Triangle. Specifically eastern Indonesia, Sabah and the Philippines. While the Northern and Southern Equatorial Currents perform the same role for the Solomon Islands.

But only Papua New Guinea is touched by all three major currents. And where all those rich nutrients, eggs and larvae come together is in the Bismarck Sea. With the wonderful Witu Islands at the epicenter of all that.

There are two things that strike you when you arrive at the Witus – firstly they are an incredibly scenic part of the world.

The islands are the peaks of subsea volcanoes that rise up from the deep waters of the Bismarck Sea. And the main island Garove is actually the caldera left after a major eruption some 200 to 300 years ago..

About 12km wide, Garove is an impressive site when viewed from the air (courtesy of a drone). The caldera’s crater is roughly 5km wide and surrounded by 100m to 150m high walls.

Those walls are breached on the southern side of the island. So the caldera is flooded and forms a superb natural harbor named after the German humanist and theologian Johann Albrecht.

Copra and cocoa are grown on the islands. Pioneered by the legendary Dickie Doyle, who sadly passed away in 2013.

The second thing that will probably catch your interest will be the names of the dive sites.

And we can thank Alan Raabe, the other great pioneer of the Witu’s, for their quite interesting names…

Alan, on his boat the Febrina, discovered and then named all the sites at the Witu’s.

And clearly let his irrepressible and wicked Australian sense of humor roam free when it came to the naming part!

The diving at the Witu’s falls in to two basic categories. Classic but glorious fringing reefs and interesting black volcanic muck!

Viewed from a drone the fringing reefs are really quite spectacular. While underwater the rich waters of the Bismarck Sea and the isolation of the Witu’s have combined to create incredible self-contained ecosystems that pulse with life.

The tops and sides of the reefs have dense coatings of beautiful, healthy hard corals that host a plethora of reef fish. Then, the reef walls start to descend down in to the depths. Here  you will find equally healthy and very photogenic sponges, sea fans, anemones and soft corals.

Out in the blue will be schooling jacks, barracuda and batfish. Plus patrolling grey reef and white tip sharks will hang back in the distance.

Whenever I dive places like the Witu Islands the same thoughts always come to mind. One day, not that long ago, all reefs must have been a bit like this!

But wait, there’s more… The massive explosion that created the huge caldera on Garove Island also deposited rich, black volcanic ash. Both above and below the water. And, on land, it is those fertile soils that have allowed Dickie Dolyle’s copra and cocoa crops to flourish.

Underwater they have created places for critters to thrive in the black sand. And there is much to keep macro photographers happy at the Witu’s!

Some of the Signature Dive Sites…

Tempting as it is to give you the usual “laundry list” of the dive sites at the Witu Islands. Instead I wanted to just give you a flavor of what is there…  Which I will do by describing the signature sites and let my images do the rest of the talking.

(I did warn you…) Located on the western side of Garove Island, this site for me personified all that is great about the Witu’s. Incredible hard coral coverage on the top and around the sides of the reef.

Which then gradually gives away to the softer side of things. With superb sponges, vibrant red sea whips, beautiful sea fans and numerous colorful anemones.

The fish life is prolific and out in the surrounding waters you will see patrolling, but usually shy, reef sharks.

As good as Dickies Knob is, there is an even better site just off from the main point

The Gonads is a relatively small, but quite deep seamount. It starts in around 30m and is best found by following a bearing from the main site. It’s only a few minutes swim, but you are really in the blue as you cross over – so it’s quite exciting!

Clearly you are limited on depth and time with such a site, but I was fortunate to dive it twice and was simply blown away by the incredible soft coral and sea fan growth around the top and first 10m of the seamount.

It was as good, if not better, than the very best I have seen on the Southern and Sagof-Daram archipelagos in Misool – generally considered as the best reefs in all of Indonesia’s Raja Ampat!

This site is located at Cape Kurabo on the western tip of Mundua Island. And Alan Raabe must have been beside himself when this site was first discovered as it really is quite special!

As the name suggests, the site is all about the pair of very scenic arches. Which are on the sloping ridge that runs down in to the deep from the main reef.

The site’s permanent mooring is perfectly located to dive on and return to from the ridge. As the the arches are at 23m, bottom time can become an issue as you explore the caves and what the rest of the site has to offer.

The arches are side by side and easy to find as you descend down the ridge. Plus they are quite safe to enter and exit. The surrounding area has a lot of nice sea fans and generally there is much to see. And when your bottom time is up you simply swim back up the ridge to the mooring.

Pronounced “weary bay”, this black sand bay is located on the south-west corner of Garove Island and provides a nice, safe anchorage so that open-deck diving can be followed.

There is a lot to see at Wire Bay and night dives are often exceptional for the smaller creatures of the ocean, but my favorite time to dive it is at first light. Because not far from where the boat anchors there is an incredible patch of cabbage coral that hosts numerous small reef fish.

As the sun starts to rise it creates “cathedral” lighting that shines down on the cabbage coral creating a superb Kodak moment!

Overall a trip to the Witu Islands is an exceptional experience with superb diving. Together with incredible above water scenery and a friendly reception guaranteed from the local villagers.

How to dive the Witu Islands?

The only way to dive the Witu Islands is from a liveaboard and there are two boats that service the area – both based from Walindi Resort in Kimbe Bay.

MV Febrina and its captain Alan Raabe cover the Witu’s on a regular basis. And they do that almost all year round. Plus, having pioneered the diving there, they know the sites better than anybody.

The Witu’s are also now covered by the exceptional new liveaboard MV Oceania and its skipper Dan Johnson. Which is the boat I was on for my trip.

You cannot really go wrong with either option. But I have to say that I was very impressed with the Oceania, which was completely retrofitted for liveaboard dive operation just last year.

Dan is an excellent skipper who knows New Britain well after running the dive operation at Walindi for 5 years, together with his wife Cat. He sees the Witu Islands, together with the Fathers Reefs to the east, as his “signature routes”. But also intends to use the Oceania to open up whole new areas of diving in Papua New Guinea.

Exciting times ahead – so watch this space!

This article was also published in the monthly on-line Australian diving magazine DiveLog. And if you would like a PDF copy of that, please use the following link to download Diving the Wonderful Witu Islands article. 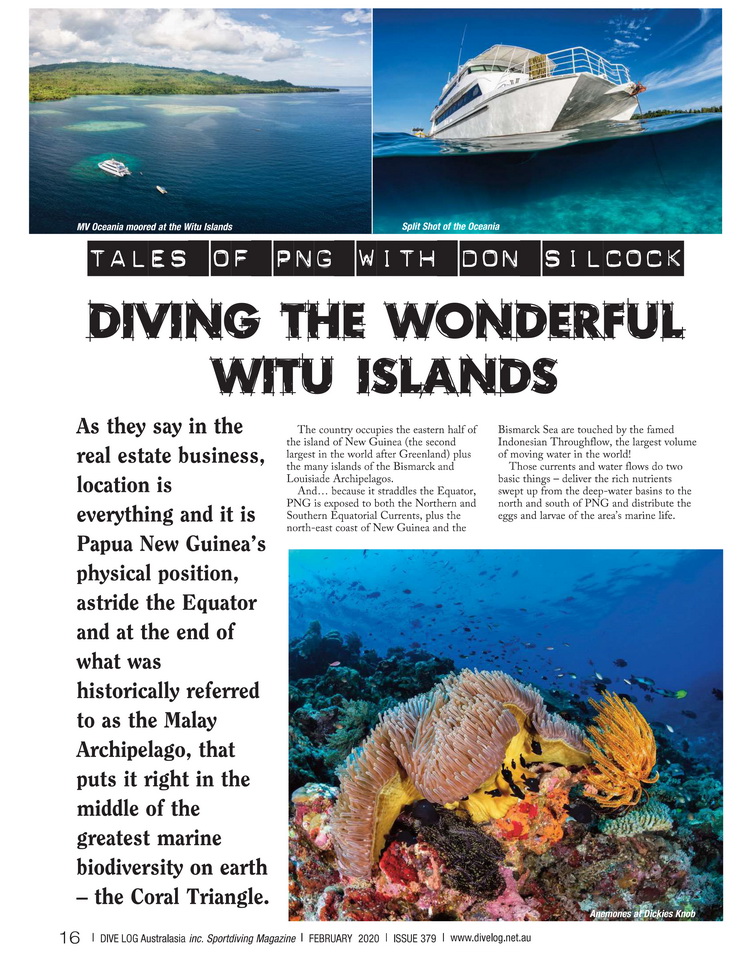